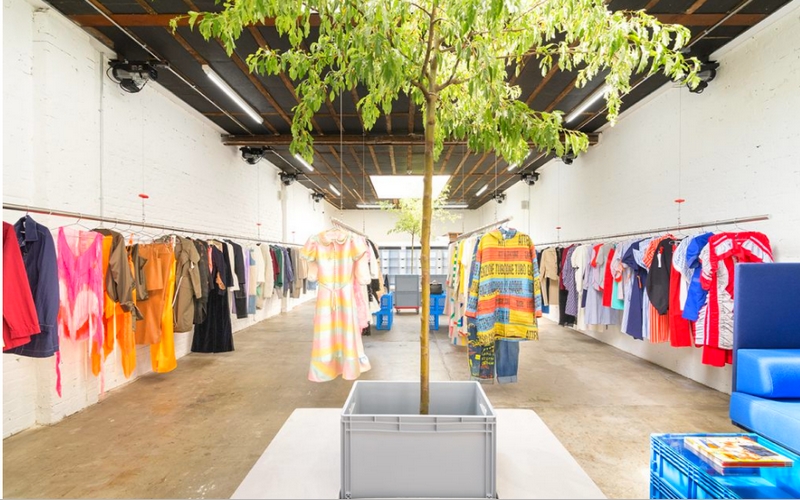 This article titled “The fashion concept store that is rethinking retail” was written by Dino Bonačić, for theguardian.com on Friday 2nd August 2019 05.00 UTC

With the British high street in serious decline and luxury fashion houses such as Burberry closing down stores globally, it’s no secret that the retail landscape is due a rethink. The public may be changing the way it shops, but retailers are also changing the way they sell. On Thursday, for example, models dressed in the latest collection by Amsterdam-based denim fashion label Hardeman joined members of the public in west London’s Eccleston Yards for a round of speed-dating. Part fashion presentation, part serious opportunity to find “the one”, the gathering was just the latest on the long list of events pushing the limits of the contemporary retail experience. The location? 50m, a fashion concept store founded by the creative studio Something & Son.

Andy Merritt and Paul Smyth, who founded Something & Son, believe their fashion venture – a communal space for emerging designers to grow and evolve as their businesses do the same – offers one answer to the problem of smaller labels being shut out of the physical retail space by skyrocketing rents.

This is not Merritt and Smyth’s first social enterprise: the pair previously launched Makerversity (a community for creative businesses set in Somerset House), Mission Kitchen (shared workshops for food workers) and Peckham Palms (a hub for Afro hair and beauty).

Community events at 50m aren’t just for industry insiders either. In the past year, they have organised magazine parties with Niijournal (which seeks to explore “the issues of empowerment and representation within race”) and Gal-dem (written by women and non-binary people of colour), as well as a week-long series of events in honour of the 2019 Fashion Revolution, a global non-profit that campaigns for greater transparency in fashion supply chains. In addition to the panel discussions and workshops, Fashion Revolution also saw a special collaboration with Dutch designer Duran Lantink that encouraged people to bring in their own old clothes, which Lantink then reworked into new luxury items.

Providing a space for designers who wouldn’t necessarily be able to hold down a standalone store is one way that communal fashion spaces hope to foster new talent in an age when even big fashion houses are struggling to profit from bricks-and-mortar spaces.

50m originally stocked the works of just 10 designers.“We were already producing stock for our own e-commerce platform but [50m] gave me the opportunity to put that into a store and provided me with a chance to gain a better understanding of our customers,” says Daniel w. Fletcher, whose eponymous label was one of the original 10.It offered a way of curating a physical shopping space without the pressure of a big department store buy.

“We want to be supportive and help [brands] grow in an organic way and for them to really feel ownership of their own space, ” says Merrit and Smyth’s 50m co-founder, Tracey Suen. “At the moment, a lot of our designers are London-based, and we’re starting to introduce more international brands. We want to be a platform where the best emerging designers around the world are all on one screen.”

Today, the store houses around 50 brands, including menswear, womenswear and jewellery, as well as work by ceramicists, artists and candlemakers. Each of the creatives rents their own space within the store, deciding what to sell and how much of it, with 50m receiving a commission based on their sales.

“Designers have lots of creativity but, in order to build their brand, there’s so many other aspects they need to be thinking of,” says Suen. “Luckily, we’ve managed to find lots of people willing to volunteer their time.” Through internal meet-ups and mentoring programmes, the community interacts with a group of experts including production and intellectual property specialists, accountants and lawyers, and marketing pros – many of the contacts that a designer will need in order to grow a successful business.

Related: Slow fashion: how to keep your favourite clothes for ever – from laundering to moth-proofing

The community-based concept allows designers the increasingly rare opportunity to meet with customers face-to-face, which can encourage a circular economy system. Instead of disposing of clothes after just a few wears, customers may be more inclined to keep, re-sell or gift an item if they have an emotional attachment to it, having been part of its creation.

Some pieces on the store’s online platform are also strictly made to order, again nurturing a sense of collaboration between the designer and their audience. By slowing down the process of shopping for clothes, 50m not only hope to create a more sustainable environment, they are also paving the way for emerging designers who want to do things differently.