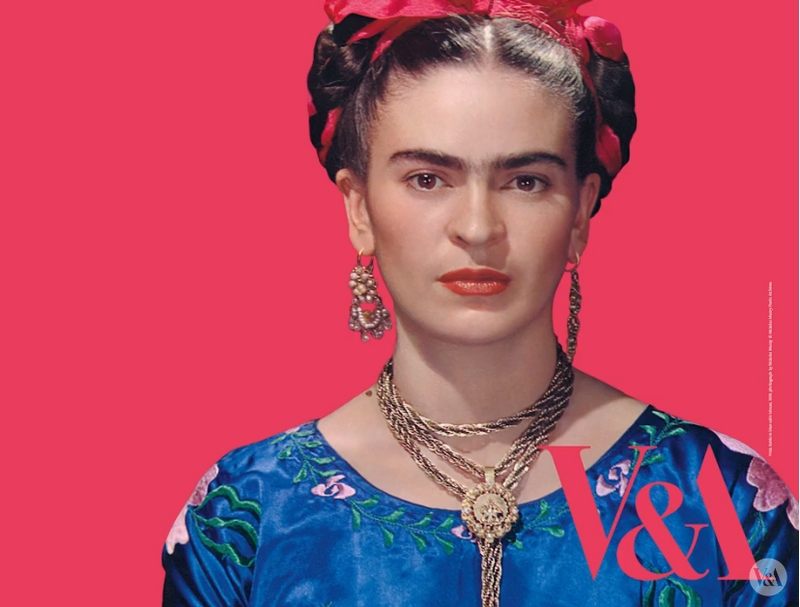 frida kahlo making herself up exhibition at V&A; photo: vam.ac.uk/exhibitions/frida-kahlo-making-her-self-up

This article titled “The commodification of Frida Kahlo: are we losing the artist under the kitsch?” was written by Jenny Valentish, for theguardian.com on Saturday 29th December 2018 00.22 UTC

Dangling from my ute’s rearview mirror is a Frida Kahlo air freshener, its scent long since depleted. I suppose I thought hanging Kahlo’s colourful visage in a utility vehicle seemed like a nice visual juxtaposition, or maybe even a gendered territorial pissing.

Since I bought it a couple of years ago, Kahlo’s face has run rampant through the retail world, licensed to clothing brands such as Mango and Princesse Tam-Tam, stationery makers Grupo Erik, porcelain company Lladró, Flamingo Candles, giftware line Temerity Jones, and electronic accessories manufacturer Ecell. There’s also a Barbie doll, from Mattel.

The air-freshener boutique is no longer there, but a few doors down a new shop sells Frida Kahlo makeup bags. Across the road from that is the Bendigo Art Gallery, now exhibiting Frida Kahlo, Her Photos. The 257 pictures from Kahlo’s collection include her own, but also some by contemporaries such as Man Ray and Pierre Verger.

Here, Kahlo’s political beliefs are clearly represented. There are photos of indigenous Mexicans living simpler lives, and of figureheads such as Leon Trotsky, the Russian Marxist who briefly lived with Kahlo and her husband, the painter Diego Rivera. (After Kahlo’s death, Rivera would drape her coffin in the Soviet communist flag.) It begs the question: would an anticapitalist, whose 1932 painting Self-portrait on the Borderline between Mexico and the United States contrasts indigenous Mexican flowers and artefacts with the smoke-belching chimneys of a Ford factory, be pleased by the commodification of her image?

It’s a hard question to answer, not least because Kahlo places herself bang in the middle of that painting, halfway between cultural preservation and capitalism. On the one hand, mass reproduction of her face might be comparable to Che Guevara posters and T-shirts in the 1980s, which Guevara’s own daughter denounced as an affront to his socialist ideals. On the other hand, Kahlo posed for her father from a young age and for other photographers throughout her life, creating what would now unapologetically be called a personal brand.

All successful brands rely on condensing an idea to its very essence, and the Frida Kahlo Corporation, which licenses her image – and donates a portion of monies to charities committed to improving the life of women and children – is clear on its website about what it believes that essence is: “The brand represents a female role model, a strong woman.”

And so, Kahlo’s face has become shorthand for modern feminism. Typing her name into Etsy’s search engine brings up 15,456 results of non-licensed merch. A T-shirt made in Bulgaria has the tag “girl power”. A sweatshirt is “the perfect present for any women you want to support, inspire and empower”. A phone case is billed simply as a “feminist phone case”.

Sometimes the message can become confusing. In the UK, even before a blockbuster exhibition of Kahlo’s belongings ran at the V&A in 2018, Theresa May wore a bracelet made up of miniature panels of the artist’s paintings at the Conservative party’s 2017 conference, prompting the Telegraph UK to ponder “the four things Theresa May might have been trying to say with her Frida Kahlo bracelet”.

In the Bendigo Art Gallery shop, there are Frida Kahlo mugs, dioramas, cushions, vases, calendars, quilts, earrings, tote bags and pill boxes. Senior curator Leanne Fitzgibbon tells Guardian Australia: “Frida Kahlo clearly understood the power of the self-portrait, and carefully constructed and controlled her image during her lifetime through her paintings, photography and her public presentation. As an individual who crafted her image to convey her love of Mexican culture, her warrior-like strength and ability to overcome adversity, it’s likely she would be pleased to see her image shared so widely.”

There’s also undoubtedly a depth of connection that female gallery-goers feel for Kahlo. Back in 1989, feminist activist artists Guerilla Girls created the poster “Do women have to be naked to get into the Met. Museum?” It points out that “less than 5% of the artists in the modern art sections are women, but 85% of the nudes are female”.

Travelling down from Echuca to the Bendigo exhibition is Jacqui Donchi-Berthaume, who discovered Kahlo at art school. “After being saturated with Magritte, Pollock, Warhol and Munch, it was a revelation to hear about a female artist from the back blocks,” she says. She agrees with Fitzgibbon that Kahlo might have approved of the proliferation of her image. “As much as we’d like to think of her as an accidental icon, Frida ran with the big horses,” she says. “She courted infamy internationally and was never what you would consider a folk obscurity, as fiercely loyal as she was to Mexican folklore and iconography. So while she was a hardened anticapitalist I think she would’ve gracefully accepted the chronic reiteration of her image, like Warhol or Bowie did. There’s been a postmodern ripple effect.”

Meanwhile, Melburnian Rachel Boyce has a much-treasured photograph of herself and her mother wearing huipils to the first ever Frida Kahlo exhibition in Australia at the Art Gallery of South Australia in 1990, and has visited La Casa Azul (The Blue House), Kahlo’s home in Mexico City. “What’s not to be inspired by?” she says. “A bi, disabled, moustachioed, monobrowed, cross-dressing woman of colour. A gloriously extraordinary fashion icon who celebrated peasant clothes and traditional textiles. And an incredible, exquisite artist.”

A few articles have dubbed Kahlo “the queen of selfies”; Boyce isn’t impressed by that. “Self-portraiture and ‘selfie’ are not the same. That’s an odious and simplistic contemporary reading that places Kahlo in a Kardashian vortex,” she says. “I think of Kahlo more like Mirka Mora – lifelong lived art.”

Some artists, though, have used Kahlo as an inspiration rather than appropriating her self-portraits. Working as Betty Jo Designs is Melbourne’s Liz Jones, who has created Kahlo wall hangings. “My version of her is a tribute to her distinctive appearance and wonderful artistic legacy,” she says. “I am mindful of the fact that Frida’s face has become a commodity. When you see reproductions of her self-portraits on everything from shower curtains to baby onesies, the personal meaning behind her work is diminished and her persona gets diluted into a mass-produced design concept.”

Related: Sensuality, lust and passion: how the Pre-Raphaelites changed the way the world sees women

Another Melbourne artist, Louise Saxton, reinterpreted one of Diego Rivera’s paintings in her own Desnuda y Flores 2015 after Diego Rivera 1944. “In my work the layering of delicate antique lace and hundreds of pins references Frida’s damaged spine and pelvis and the many difficult operations she underwent throughout her adult life,” she says. In another work, Frida after Kahlo, Saxton gives Kahlo swallow-tailed hummingbird eyebrows. It’s a reinterpretation, in antique and vintage needlework, of Kahlo’s own Self Portrait Dedicated to Marte R Gomez, from 1946.

“I have never desired to buy into the commodification of Frida’s image,” says Saxton. “While she embraced publicity and appears to have enjoyed having her image reproduced, I do wonder if this kind of commodification of an artist’s body has, or would ever, happen to a man?”