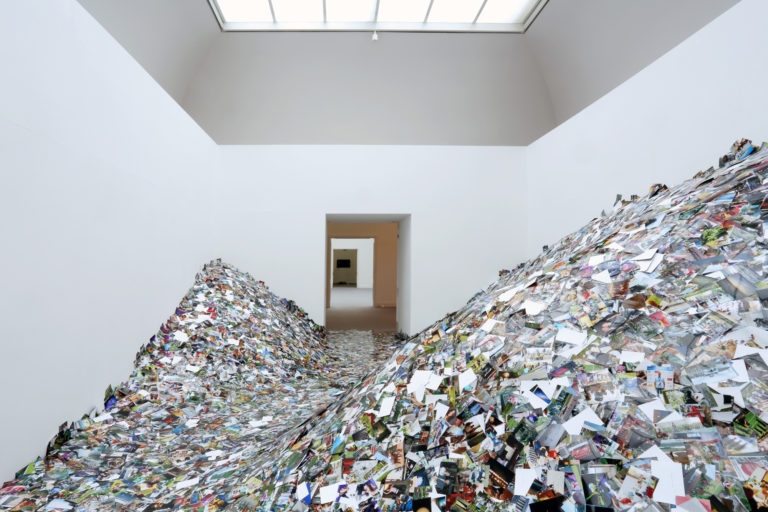 This article titled “Memes, technology and sci-fi: what to expect from art in the US in 2019” was written by Nadja Sayej, for theguardian.com on Thursday 3rd January 2019 08.00 UTC

Neil Harbisson, the world’s first cyborg artist, has an antenna implanted in his skull. His artist girlfriend, Moon Ribas, has online sensors in her feet. Five or 10 years ago, this would have seemed like the plot of a Philip K Dick story, but now it’s less fantasy and more reality.

With our dependency on smartphones, our Netflix addictions and with almost half the country on dating apps, our devices are becoming dangerously inseparable from our everyday lives. From surveillance to selfie vanity and memes, a series of technology-themed exhibits are coming to the US next year, which trace the evolution of photography, show the roots of social media and share how technology can actually be a force for good.

For a critical take on the Instagram scroll, pop by snap+share: transmitting photographs from mail art to social networks, which opens 30 March at the San Francisco Museum of Modern Art. On view will be Eva and Franco Mattes’s Ceiling Cat, a sculpture based on a lolcat meme where a taxidermy cat watches you from a ceiling. “It’s cute and scary at the same time, like the internet,” say the artists.

The exhibition looks at how social networks and photo-sharing apps can be traced back to mail art of the 1970s, pioneered by the Fluxus art movement alongside the American artist Ray Johnson. “The revolution we are experiencing at the moment with technology and social media is reducing the amount of time it takes to share a photograph, and now we are sharing millions of images every day,” said Clément Chéroux, the curator. “It’s changed the way we see and interact with the world.”

On view until 14 April, the Whitney Museum of American Art in New York is showing Programmed: Rules, Codes, and Choreographies in Art, 1965–2018, which looks at how computer programming has evolved over the past 50 years, from algorithms, to text-based works and video art, including Tamiko Thiel’s piece Unexpected Growth, which uses augmented reality to offer a window into the future – where sea levels have risen to dangerous levels and oceans are filled to the rim with plastic.

“In a world that increasingly becomes algorithmically coded, from our conversations with our smart devices to our financial markets, it seems important to look at the aesthetic and social impact of these codes and ask: ‘What kind of programs do we create to express ourselves or to govern the world we live in?’” says the co-curator, Christiane Paul. “Art can provide interesting perspectives on the effects, creative potential, as well as limits of instruction and rule-based technologies.”

Opening on 8 February, the International Center of Photography in New York presents Your Mirror, an exhibit of portraits that range from selfies to snapshots and FBI “Wanted” posters. There is a “carte-de-visite” (visiting card) of African-American abolitionist Sojourner Truth, who used her photos to raise money for her speaking tours through the 1860s, alongside self-portraits by the Cameroonian artist Samuel Fosso, who has created theatrical self-portraits in bathing suits to drag and disco garb – long before smartphones (or even Cindy Sherman).

“We live in a hyper-photographic culture,” says Erin Barnett, ICP’s director. “Exploring the historic context of portraiture, we aim to gain understanding of the ways in which people made – or didn’t make – decisions about how they were presented for the camera and for society.”

Opening on 17 March at the Museum of Modern Art, one exhibit looks at how dependent we’ve become on technology. New Order: Art and Technology in the Twenty-First Century examines how artists have experimented with technology, from iPad drawings to 3D printing and ultrasound gel. Works in the show include Josephine Pryde’s It’s Not My Body XII, which shows an MRI scans of an embryo, raising questions about abortion.

“At a moment when technology seems utterly smooth and weightless – composed of invisible waves, wireless signals, abstract codes – it is crucial to remember that technological processes are still stubbornly tied to the physical world,” said the curator Michelle Kuo. “The artists in this exhibition remind us that technology is never as seamless, or as virtual, as it is made out to be.”

On 22 January, the exhibit The Art Happens Here: Net Art’s Archival Poetics opens at the New Museum in New York. Looking at the history of “net art,” including the world’s first cyberpunk rock band, online trading games and 3D-printed sculptures, Material Speculation: Isis is an artwork by Morehshin Allahyari, who has created 3D-printed replicas of the many statues and artefacts destroyed by Isis in 2015. It’s part of the artist’s ongoing digital archive of the Middle East, “a gesture of resistance against ‘digital colonialism’”, said Michael Connor, the curator and director of Rhizome, who is organizing the exhibit.

“One of the reasons why art and tech exhibitions are particularly important now is that there’s a growing need to think historically about technology and its impact on culture,” said Connor. “As people try to reckon with bewildering changes in work, love and politics that can all be connected with network culture, museums have an opportunity to help foster some reflection on how these changes have come to pass.”

Looking into the future, Mundos Alternos: Art and Science Fiction in the Americas, opening on 7 April at the Queens Museum in New York, brings together sci-fi artworks made by Latin American, Latinx and Caribbean artists, among others. Showcasing artworks made over the past 20 years, the exhibit touches upon time travel, Indigenous futurisms, aliens and constellations.

“Both technology and art continue to reshape our understandings of the world we live in,” said Hitomi Iwasaki, the curator at the Queens Museum. “Science fiction further reimagines the difficulties that exist in this world and provides alternative possibilities – even the resilience of humanity can be found here in the crossroad of art and science fiction.”