Bacon-flavored coffee to be made by Seattle’s Best

Studding foods with bacon seems to a recipe for success. It sounds yummy for fall and for the judges of a food contest held by a popular coffee chain in NYC. 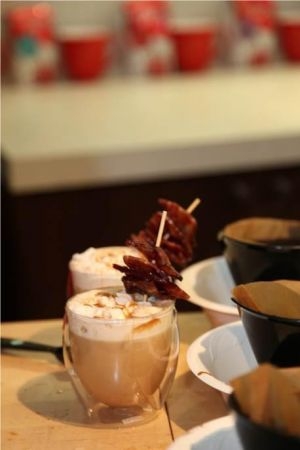 Eileen Gannon’s “How to Win A Guy With One Sip” coffee mixed pumpkin pie-spiced bacon-flavored syrup with candied bacon. The new beverage won the $10,000 jackpot and a the slot on Seattle Best’s menu, a coffee chain brand owned by Starbucks. Eileen Gannon’s coffee creation garnished of candied oven-baked bacon was lauded as the most “imaginative drink in America.” The concoction beat five other competitors to win the Red Cup Showdown. The other notable coffee drink included “Cafe Mocha en fuego,” a raspberry-flavored chocolate coffee spiced with chili powder, cinnamon and cayenne.

If you love coffee and if you crave for bacon, you can have them both. So nothing goes better with coffee than the taste of bacon. At least this fall.