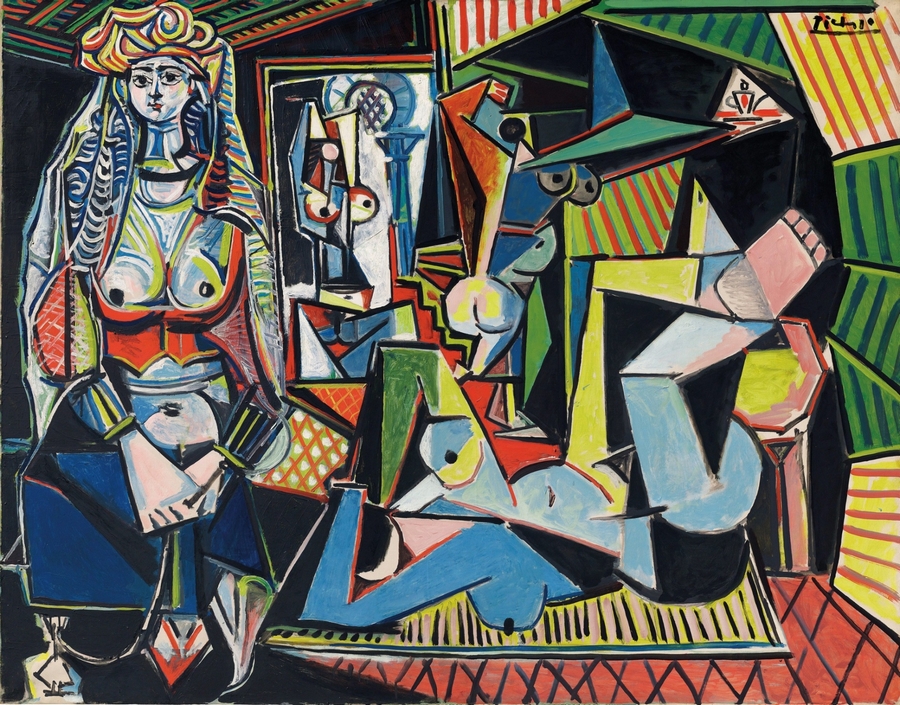 This article titled “Splurging £102.6m on Picasso’s Women of Algiers is simply insane” was written by Jonathan Jones, for The Guardian on Tuesday 12th May 2015 12.43 UTC

Picasso was the greatest artist of the 20th century but Women of Algiers, which has just set a new world record at Christie’s, is nothing like his masterpiece. It is certainly interesting, though. In his later years, Picasso embarked on a series of interpretations of some of his favourite paintings. Women of Algiers (version O), painted in the 1950s, is one of his responses to a sensuous eastern fantasy of harem life painted by Delacroix in 1834 that hangs in the Louvre.

For Picasso there was a kind of artistic autobiography in painting his own version of Delacroix’s Women of Algiers. The Delacroix is one of the first 19th-century masterpieces of French eroticism, a radical genre that would lead through Courbet’s Origin of the World and Manet’s Olympia to Picasso’s own revolutionary 1907 work Les Demoiselles d’Avignon.

But when an artist gets to the point of painting such intricate analyses of his own place in art history, you know he’s an old man. Picasso’s Women of Algiers series lacks the fire of genius that makes his work from the 1900s to the 1940s so inexhaustible. It is a coda to his career, a footnote to his achievement.

This is a palpably absurd price – and for once we can say that with certainty. You can see how silly it is by comparing it with another recent sale of a far better Picasso painting. In 2010 Picasso’s Nude, Green Leaves and Bust sold for £66m – a world record at the time. But Nude, Green Leaves and Bust is a much greater painting than Picasso’s dry and self-conscious Women of Algiers. Painted in 1932 in the abandon of his lust for Marie-Thérèse Walter, it is a rollicking surrealist celebration of the senses.

If Women of Algiers, a much lesser painting, can sell now for a higher price, it must mean Picasso’s credibility is suddenly so high with art collectors that even a flawed late work commands insane splurging.

That leads me to an irrestistible if totally bizarre conclusion. Can the art market at this lavish level be as flighty as this season’s fashions and pop trends? Can an artist be worth this kind of money simply because he is “hot” in the shallowest possible way?

Picasso has been in the news because of the reopening of the Musée Picasso in Paris last year. After all the controversies over its prolonged closure, the relaunched museum put Picasso right back at the centre of world art where he belongs. His supremacy in modern art suddenly became obvious again. There is, in short, a buzz about Picasso right now – to put it in the dumbest possible way.

And that is the idiotic level on which art collectors operate, to judge from this sale. Someone has so much money they can fork out colossally for a late, ungreat Picasso just because they read about him in an inflight magazine or saw a doumentary. Hey, Picasso, let’s get one.

I rest my case. Art collectors are fools who can be manipulated to spend fortunes with the same superficial curiosity about fashionable stuff that makes most of us buy a Bowie comeback album or go to see a film everyone’s talking about. It’s as trivial as that.