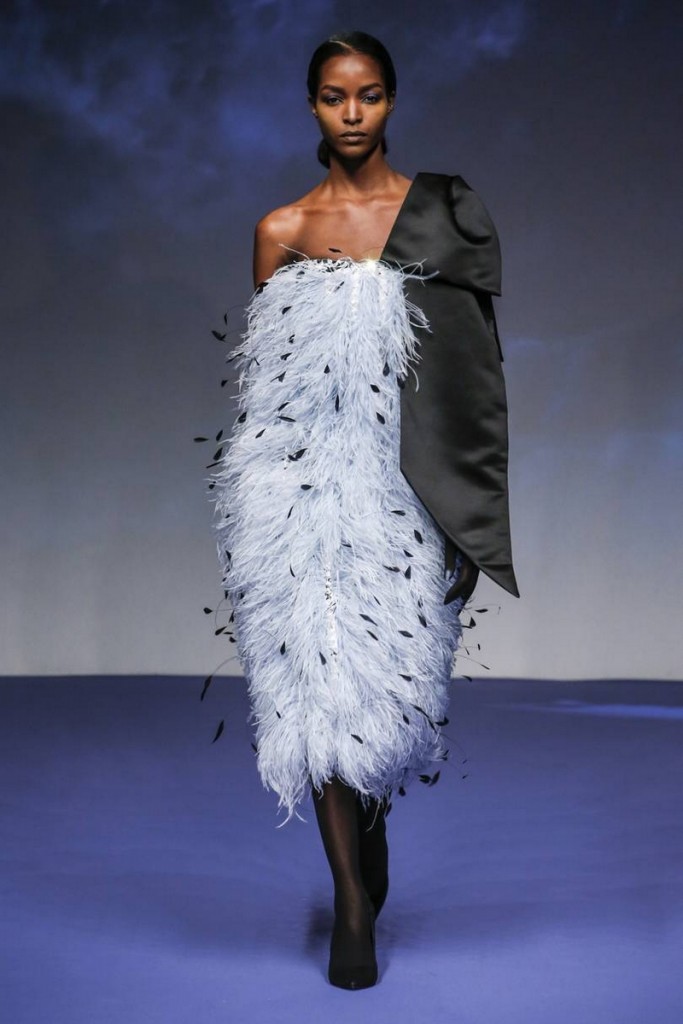 How do you follow the coup of having the Queen front row at your fashion show? That was the question Richard Quinn had to answer at London fashion week, the first since Her Majesty watched on in February. For his third show, Quinn instead filled the front row with schoolchildren, from Quinn’s former school and sixth form – plus students from Central Saint Martins – who took up the space more usually occupied by celebrities and fashion editors.

The students watched a show on Tuesday that had the drama to intrigue potential future designers. It was soundtracked by the London Philharmonic Orchestra and a film of thunder and lightning was projected on the walls. The first model wore a black tulle concoction, with black velvet leggings and a black version of the balaclavas in Quinn’s previous collection. The following outfits showed Quinn to be developing in the tradition of John Galliano and Alexander McQueen. Like them, he favours drama, romance and glamour. With print a running thread, there were flapper dresses with marabou layers, debutante ballroom dresses with a feel of The Crown, bright kaftans fit for a 70s-era heiress and floral 80s party frocks with matching tights.

Pupils from St Thomas More comprehensive school in Greenwich, south-east London, were impressed. Isabella Marenhi, 14, said: “I thought it was really amazing. It reminded me of all four seasons.” Molly Farrell, 14, said: “I kind of thought the same. At the beginning, the dresses looked like raindrops.” Isabella added: “The way the models were walking and the look on their faces was really breathtaking.”

Quinn would be pleased. In the show notes, he explained the decision to invite the students was prompted by the crisis in arts education, with a 34% drop in arts GCSEs from 2010 to 2018. “At a time when real damage is occurring to arts education, I want to point to how substantially its creative power lights the path to our future,” his notes said. “I had a background where no one really did art and design but I was really encouraged to do it,” he added after the show. “Now they’re not classing it as an academic subject which I think is ridiculous – [fashion] is the second most profitable industry in the world. I think it’s really important to make a statement.”

Quinn’s business has experienced the royal effect. After the February show, the label’s Instagram followers rose from 18,000 to 50,000, and now stand at 61,000. Sales also increased, with three times the number of stockists this season. He has also completed a collaboration with the department store Liberty, and with Debenhams on the high street. A homewares collection for Matchesfashion.com will launch in November.

In addition to his own label, Quinn manages a print studio in south London. Brands including Charles Jeffrey, JW Anderson, Burberry and Ports 1961 have used the service. The monarch was at his February show to present the designer with the inaugural Queen Elizabeth II award for British design, which focuses on a designer’s talent but also their value to their community. Quinn’s latest show further underlined the fact he was a worthy recipient.

Victoria Beckham, who showcased her 10th anniversary collection on the catwalk on Sunday, finished her whirlwind tour of London fashion week on Tuesday by exhibiting her Victoria, Victoria Beckham collection. It included denim inspired by the Instagram account @70sbabes and a print of mountains that took Beckham’s childhood science kit as its jumping-off point. Her own T-shirt read “smile”, an appropriate response to a week in which an Instagram video showed the usually very curated former Spice Girl dancing to Spice up Your Life at a party on Sunday night. “I think we’ve proven this week that fashion didn’t steal my smile,” she said. “We have a sense of humour, personality and we smile a lot.”