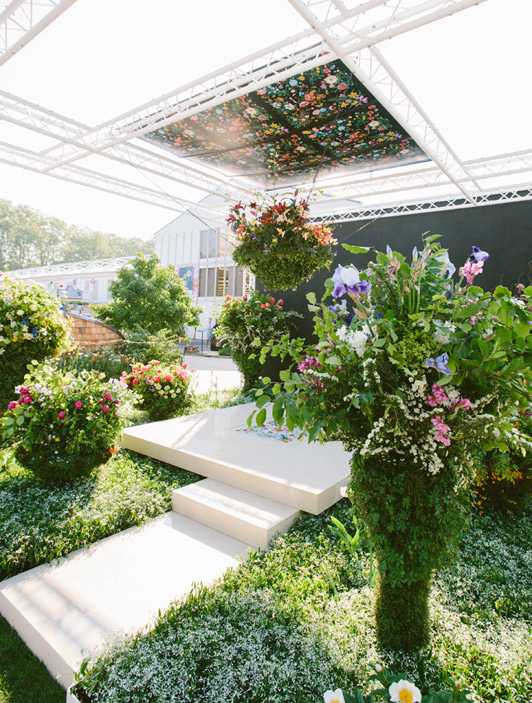 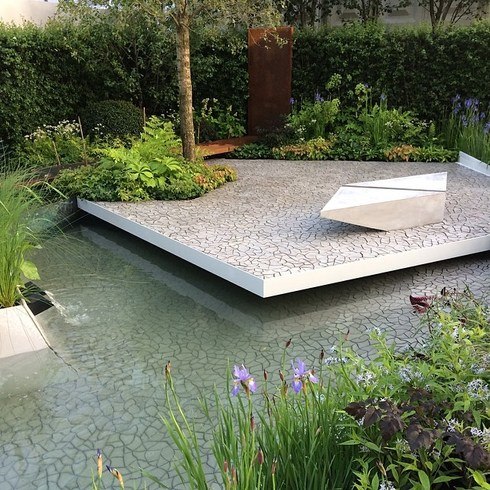 The highlights of 2014 edition include Hugo Bugg’s RBC Waterscape garden, the First World War-inspired garden created by Birmingham City Council to mark the centenary of the outbreak of war, and Gucci’s tribute to its Flora motif.

Luciano Giubbilei won Gold and Best in Show with his Laurent-Perrier Garden. The BBC/RHS People’s Choice Winner was Matt Keightley with his ‘Hope on the Horizon’ Garden for Help for Heroes.Best Artisan Garden is Togenkyo – A Paradise on Earth by Kazuyuki Ishihara, and the RNIB The Mind’s Eye Garden won Best Fresh Garden. 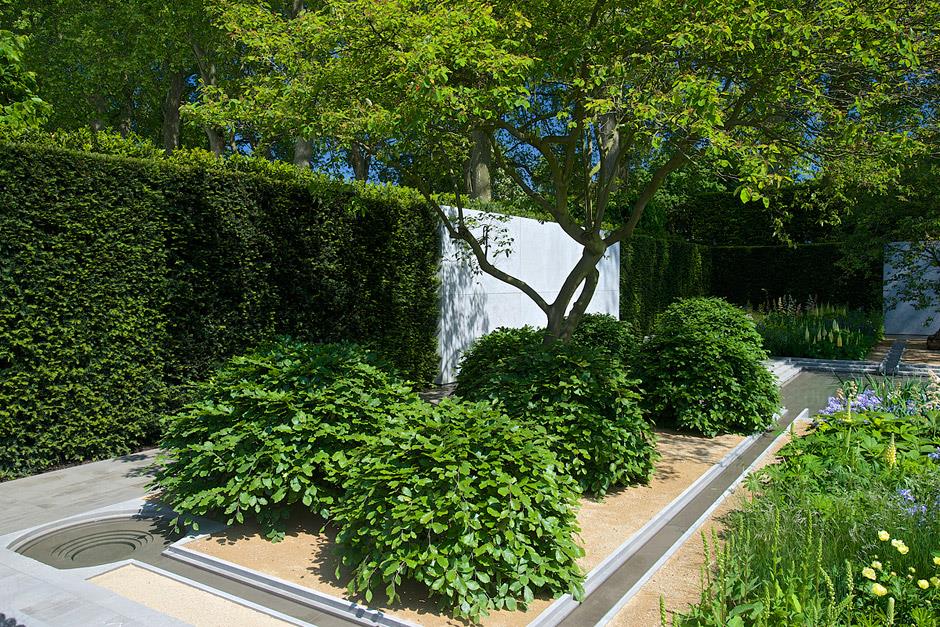 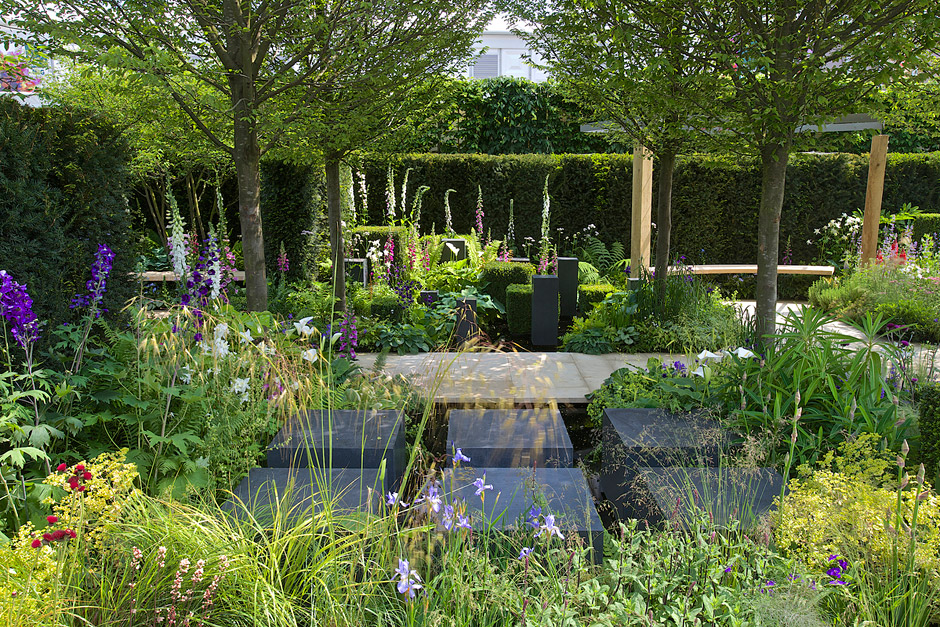 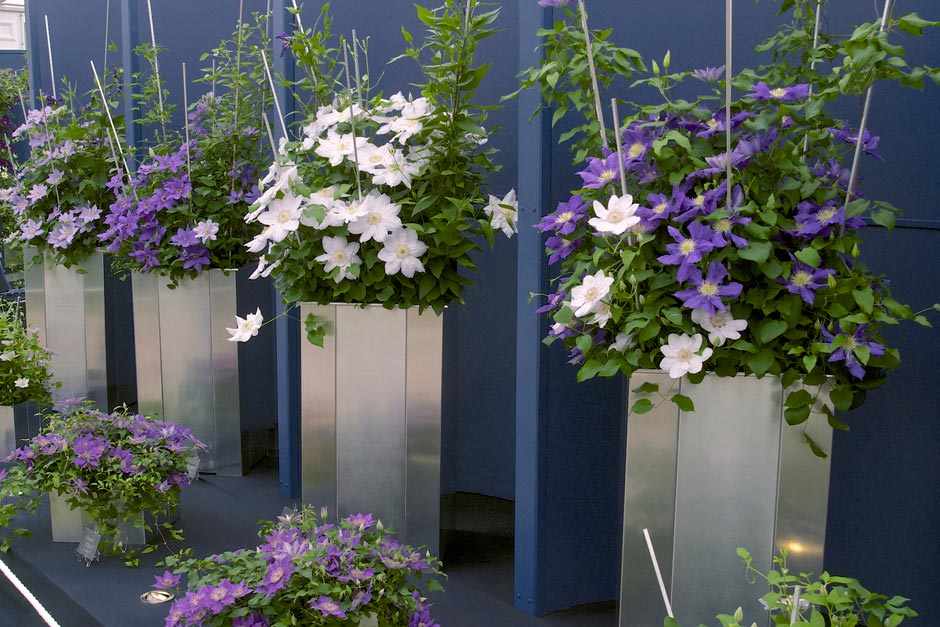 A stand-out display of clematis from Raymond Evison, but this year focussing on those that suit the modern, smaller garden space and patio containers. Some from the Bijou range only reach 30cm (1ft) tall, while others will sit nicely on a tripod growing up to 1 metre (3ft) or more. Plants are covered in buds giving a flowering season running from late May to September- a good value plant. 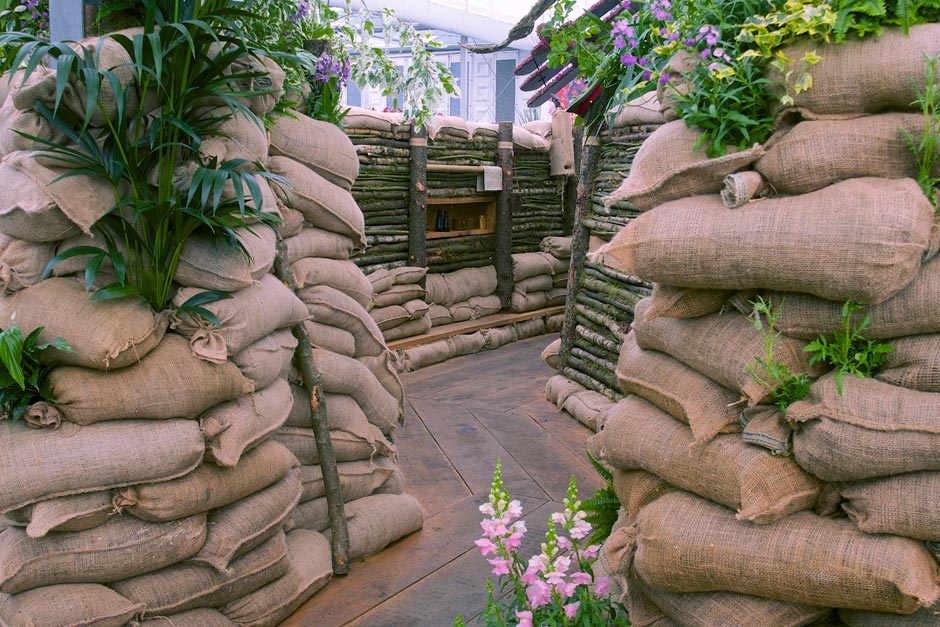 Birmingham City Council has built this recreation of a WW1 trench as a central feature of a varied and colourful display put together to commemorate the start of the war. Little details such as the soldiers‘ tin mugs sit on the shelf, and names roughly carved into the wooden shutterboards add a note of authenticity. 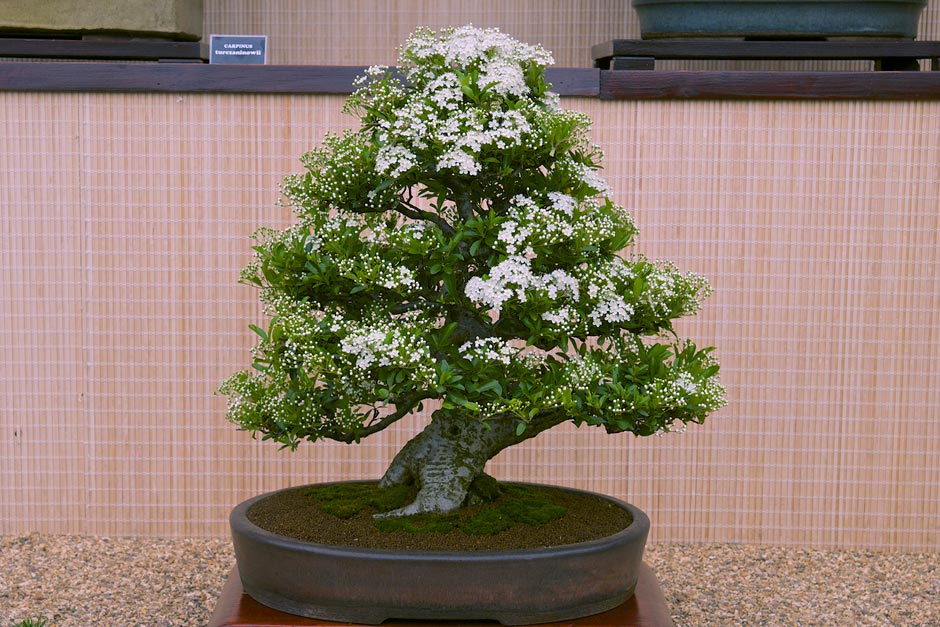 This shapely bonsai with white flowers isn’t a tree but a pyracantha that had spent 20 years growing against a garage wall before it was dug up about 10 years ago, cut back and then trimmed into a tree form. It shows that you can achieve the look of a mature bonsai with a very lowly, unwanted plant- if you have the skill. Find it on the Federation of British Bonsai Societies stand. 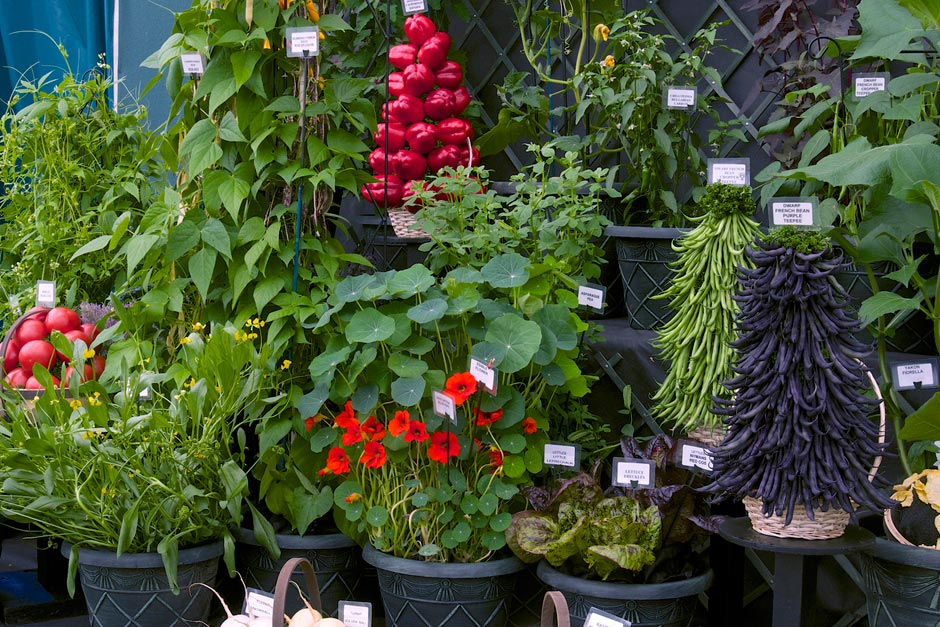 On the W Robinson & Son exhibit, vegetables are displayed in a variety of ways to show off their habit and colours. Look out for dwarf French bean ‘Purple Teepee’, where the curly pods have been arranged to mimic a Christmas tree. This variety may lose some colour in the cooking, but the flavour can be better than green forms, so well worth adding to the vegetable patch.

The 50 Golden Years of Bloom in the South West exhibit won the Diamond Jubilee Award in the Great Pavilion. It features Basil, the Gardener, a character form the children’s programme The Herbs. Made by the group in Bath, the first city to win the Britain in Bloom competition, he stands amongst the vegetables, all varieties in the Suttons range, and a fantastic display of dahlias and lupins. 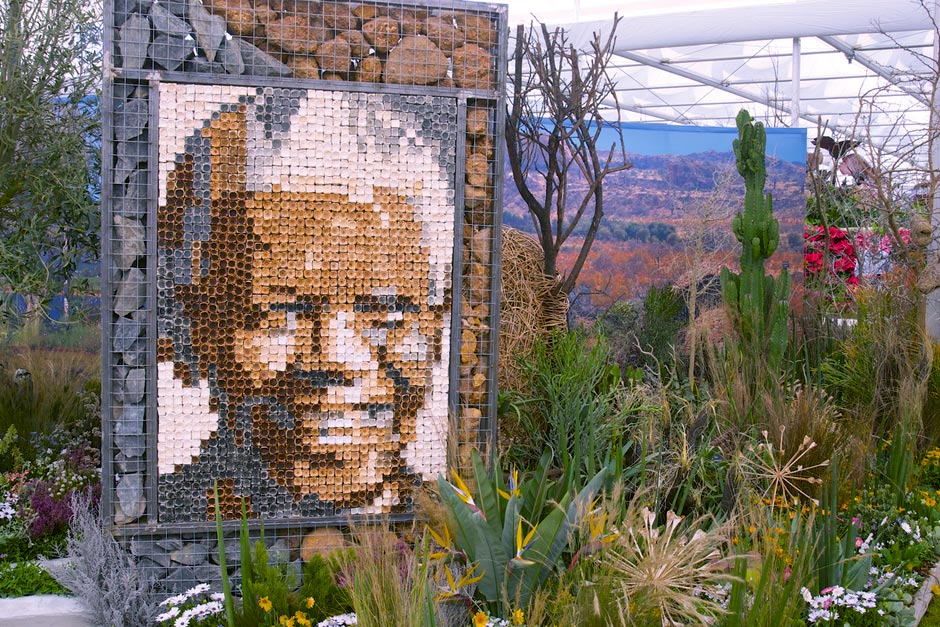 The Kirstenbosch exhibit has an eyecatching mosaic portrait of Nelson Mandela using dry protea flowerheads as the tiles and draws you to this display of natural vegetation from different habitats of the region. A mural behind the plants of the Savanna really lends atmosphere. 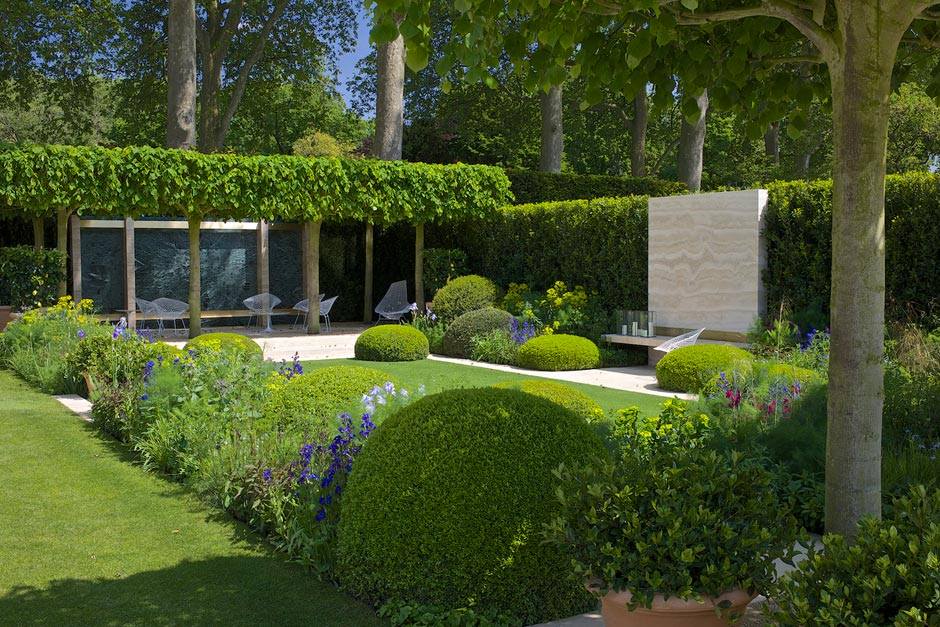 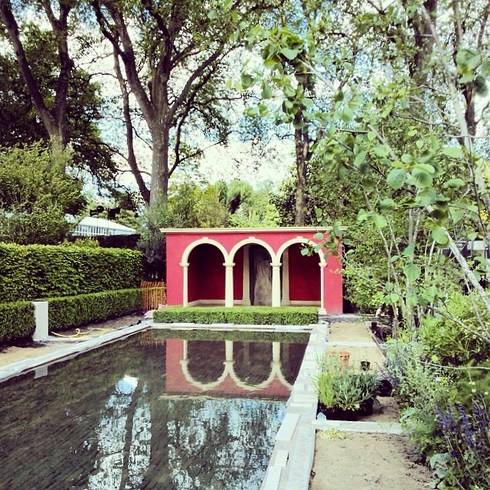