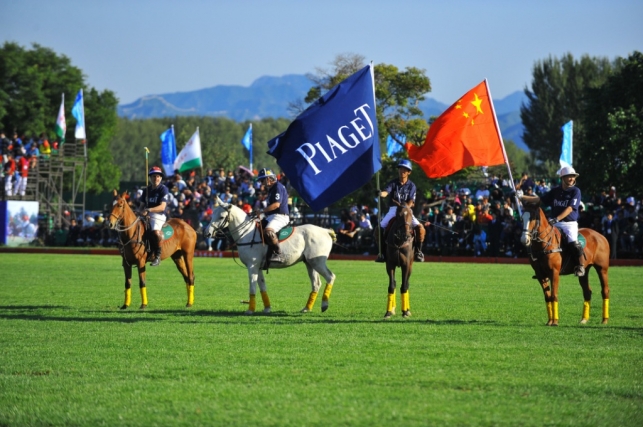 Outside the gates of the club, poor farmers tend to an orchard and pigs run amok. Inside, however, it is a very different scene. Chinese and expats in sundresses and designer sunglasses sip a steady supply of champagne in a VIP tent and nibble cucumber sandwiches.

Welcome to the Sunny Times polo club, one of three to have opened in China, in the latest sign that the pastimes of the prosperous are finding a niche in the people’s republic.

The day is hazy, but usually the club’s polo pitch offers impressive views of the mountains near the Great Wall, a two-hour drive out of Beijing. Visitors arrive in a fleet of Jaguars and Range Rovers for British Polo Day, a series of weekend jaunts designed to push polo as a soft-power tool. “Polo is exploding in China,” says Ben Vestey, managing director of British Polo Day. “China is very much on the radar in a way that it wasn’t two years ago.”

Polo, once a Tang dynasty (AD618-906) sport, was seldom played in China by the 1970s. Now, however, clubs are thriving in Beijing, Shanghai and Tianjin. Xia Yang, founder of Sunny Times, welcomes the resurgence. “Polo started in China, so I wanted to open the gate for Chinese polo,” said Xia, a property developer who was inspired to get involved in the sport after watching a documentary which featured Prince Charles at a match.

Invitation-only events provide valuable networking opportunities but, above all, polo is an expression of ultimate luxury for those who have everything.

“In the west, polo is said to be an aristocrat’s sport,” Xia said. “We don’t have aristocrats in China, but we do have a lot of people who have got very rich very quickly. I want to encourage them to behave like gentlemen, and playing polo is part of that.”

This week, the Tianjin Goldin Metropolitan polo club will hold the inaugural Fortune Heights Super Nations Cup 2012. Professional teams from Hong Kong China, the US, England, Argentina and South Africa will play in a tournament hosted by the Federation of International Polo and the Tianjin Sports Bureau.

Membership at the Metropolitan, which opened in 2010, starts at 380,000 renminbi (£37,407), rising to 1.18m renminbi for the ownership of a polo team. Facilities include a five-star hotel, 14 restaurants, bars, and lounges, a spa, and air conditioned stables for pampered foreign-imported horses tended to by expats.

Attendance at the Super Nations Cup is by invite only. But some critics suggest polo may be a fleeting fad designed to flaunt wealth or an opportunity to invest money in vast property schemes centred on the clubs. Knowledge of the game remains patchy.

Back at the Sunny Times, a small crowd of Chinese spectators opposite the VIP tent wave national flags and hold giant images of foreign players flown in to teach and, in this tournament, represent China. “There was lots of cheering last year,” recalls one English polo player who took part in the games. “Although not necessarily at the right moments.”