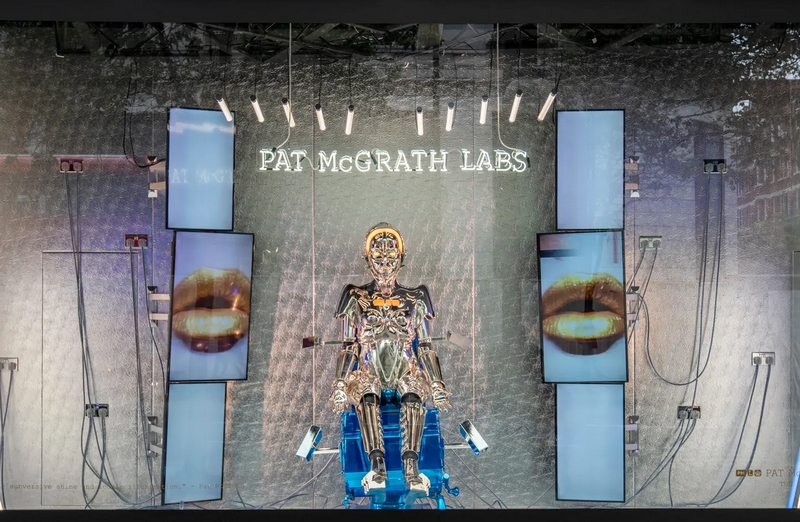 Pat McGrath Labs, the beauty range created by the British makeup artist Pat McGrath, has achieved the highest cosmetics turnover in its first month on sale at Selfridges of any brand in the department store’s history.

The Oxford Street department store collaborated with Pat McGrath Labs on its largest-ever retail takeover, A Technicolour Odyssey, dedicating 155 sq metres of its shop floor to a branded pop-up space, as well as giving over 24 of its 27 famous windows to the partnership. The launch in April saw Selfridges achieve the best daily cosmetics sales in its history, with the sale of a Pat McGrath Labs product every 40 seconds.

The brand was launched in 2015 as one of the first to pioneer the digital-first business model, with customers switching their allegiance from more established cosmetics houses to niche upstarts and makeup-artist-led ranges.

“I think what people respond to in the end is the product and the quality,” says McGrath, whose launch party at the department store drew guests such as her friend and long-term collaborator Edward Enninful, British Vogue’s editor-in-chief, as well as models, designers and celebrities she has worked with throughout her career. “You can have the most inspiring influencer or fabulous figurehead at the helm, but if the formulas are not working, you can pack your bags and close up shop. Today’s beauty lover is way too smart and way too connected to let any brand get away with just anything. Major quality will always win.”

The brand is now the best-selling eye make-up brand across Selfridges’s business, with the Pat McGrath Labs FetishEyes mascara now its number-one selling mascara, seeing off competition from established beauty brands such as Chanel, Mac and Lancôme.

“We do projects based on intuition and because we believe in great talent, but you never know if it will be a commercial success,” says Sebastian Manes, Selfridges buying and merchandise director. “But Pat McGrath Labs was our biggest and most successful beauty brand launch ever. Our customers connect with her on a very personal level, they love her work, product and the woman herself. So we pushed boundaries very far outside our comfort zone to make Pat even greater at Selfridges.”

The brand’s Instagram account, where McGrath refers to herself as “Mother”, has amassed more than 2.7 million followers. McGrath herself announces new launches, hosting frenzy-inducing “drops” and often debuting new products from backstage at the fashion week shows she works on every season.

“I didn’t want to do a brand the old-fashioned way, with the same old counter and a set of images and products that change four times a year,” McGrath says. “Once it became clear to me that social media would allow me direct, one-on-one dialogue with my customer, plus the opportunity to release compelling content and iconic imagery four times a day, I knew the time was right for Labs.”

McGrath is now based in New York, but says that the collaboration has reminded her how much she enjoys working in her home country.

“I think Selfridges was excited about my homecoming … the idea of a local girl like me coming home to set up shop was irresistible and so much fun,” she says. “It’s such a pleasure when I hear the numbers we are doing.”

A permanent Pat McGrath Labs counter will launch in the Selfridges Oxford Street beauty hall on 24 June, the day after the pop-up closes, while a second counter at Selfridges Manchester is set to follow in the summer.