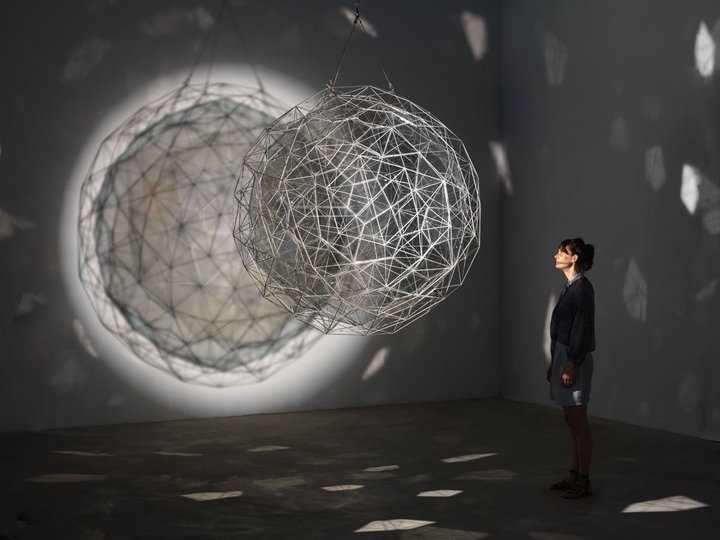 Here is rain at the window running down the pane on a sunny July afternoon. In the early morning light, another window frame appears, a projected apparition cast on a blank wall. Ripples of amber-tinted water slop back and forth in low trays on the floor, the sound slightly muffled by a huge wall entirely covered in reindeer lichen, the frizzy, greyish-green branches giving off a slight acidic tang. We are in the world of Danish-Icelandic artist Olafur Eliasson.

Then there is the fog, a long corridor of it, whose luminous density is broken by an amorphous flare of magenta as the cones and rods in your eyes tire of the yellow-lit mist, and begin projecting its complementary colour into the atmosphere. The stain hangs in the air while you walk through, the floor slick with vapour. Before the introduction of the Clean Air Act, peasoupers were common in our cities. I only encounter the smogs of my youth in galleries nowadays, or at overblown rock concerts. Eliasson’s is the fifth work involving fog I’ve seen in the last three months alone, but it is the prettiest, and was first made in 2010. Nevertheless, there ought to be a moratorium. Another fog work is meant to swathe a couch just outside the show’s entrance, but it had cleared on my visit, or was yet to settle.

There is more to Eliasson’s work than cheap thrills and damp air. He is an inventor, architect, splitter of light if not of actual atoms, universalist, artist – an all-round Renaissance man. In the catalogue to this large and impressively varied exhibition Eliasson communes with scientists, philosophers, professors of economics, neuroscience and anthropology. He talks with Denmark’s most provocative chef, René Redzepi; with ex-president of Ireland and author of Climate Justice Mary Robinson; and with hip-hop pioneer Fab Five Freddy. All this is fascinating and, in its way, rather brilliant. Eliasson is full of curiosity. He has spoken at Davos and sat down with the Dalai Lama. As curator Mark Godfrey puts it, Eliasson is a new model of artist. Godfrey precedes his discussion of the work with a lengthy list of Eliasson’s recent and current projects. You wonder there’s time to make any art.

In one of the notes, articles and other material covering a long wall in one of the final rooms of the show, Eliasson writes that “We need to move beyond the failure-success dichotomy to embrace new, non-quantifiable criteria for what is a good work of art.” For him, I think, “good” means generative, and moving beyond the production of objects into a discourse with the world itself. He encourages us to read his work as entering the frame of geopolitics, climate emergency, and all the issues – from food production to fossil fuel – that flow from that. Where his art is at its most entertaining, he also wants to effect a change in consciousness, and the ways in which we perceive the world and our place in it. Hence, the optical and other perceptual phenomena we encounter in his work are intended to alert and sensitise us to our place on the planet, as agents as much as spectators.

There’s a whiff of metaphysics in all this, and a suspicion that what isn’t all smoke and mirrors, is all talk. Eliasson’s art, for all its fleeting pleasures – whether it is the highly produced giant kaleidoscopes that spangle the walls with complex and colourful patterns, or which have our reflections sheared and reduplicated in fractal shards, or a work that splits and multiplies our shadows on a far wall – is all I think intended to make us aware of our bodily presence. His earlier one-liners – a spinning electric fan, slung from its cable, that whirrs overhead, might have more going on than mere visual amusement, but it is hard to see quite what.

But sometimes the spectacle can be startling, if not ravishing. Gouts of water from a fountain freeze in the flash of a strobe, molten and solidified for an instant. A thin curtain of rain hangs in the spotlit dark, shimmering like the aurora borealis. Another spotlight casts an empty circle on the floor. You can be a wannabe star for a moment, then move on. Sometimes it is just an art whose pleasures you don’t need to think about too much.

Revealing the mechanics of his works doesn’t make it less wondrous. Without the tells, it would all just be cheesy and overly theatrical. When Eliasson filled the Tate Modern Turbine Hall with his hazy sunrise in 2003, it was evident how the trick was performed, but it didn’t stop visitors gathering on the concrete floor to gaze up, to spell out phrases with their bodies, and look at themselves in the reflective mylar ceiling hung high in the vast void. I always thought museum staff on the balconies should monitor spectators for signs of inappropriate ecstasy, and take them out, one by one.

One thing the work did inspire was a sense of communality. Arriving at level two of Tate Modern, everyone looks hideous, their skin tones horribly altered by the yellow lighting overhead; this sickness as a trick of the light is a deliberately sour note to a show much concerned with optical wonders and visual puzzles. Only when we come to photographs of Iceland’s retreating glaciers, and a bronze block cast from the space left from a melted chunk of glacial ice, do intimations of the uncertain future start to kick-in.

But where is all this leading, I asked myself? Where does my body belong, me with my dirty carbon footprint, my innate cynicism, my impatience with fog and mirrors, as I watch the temporary waterfall cascading down its scaffolding cliff outside, from the comfort of the Tate Modern terrace cafe, where wholesome, nutritious fare of the sort Eliasson’s chefs provide at his Berlin studio is currently being served? Is this the new sort of artist, a new kind of art? We have been here before, and we shall go there again.