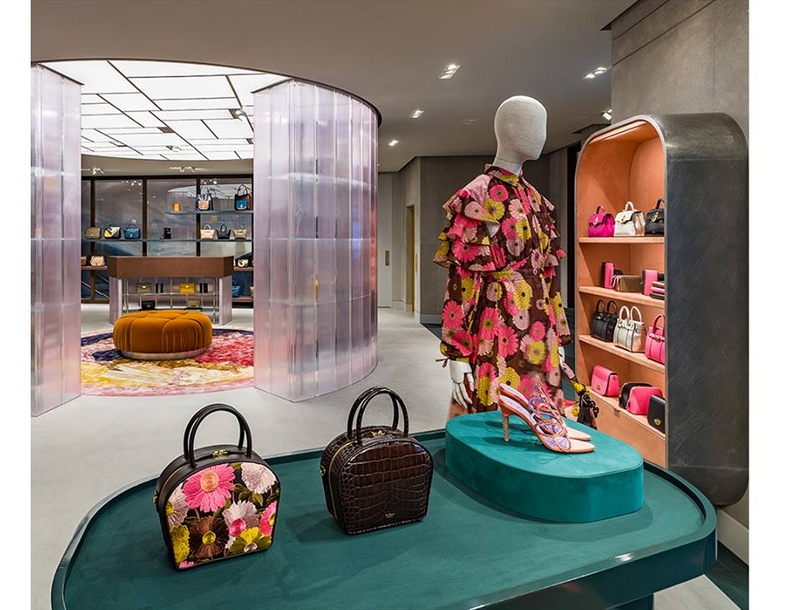 This article titled “Mulberry: how to sell British heritage to a global market” was written by Scarlett Conlon, for theguardian.com on Friday 28th September 2018 16.01 UTC

Mulberry may have been absent from the London fashion week schedule last week, but that is not to say it is not on full showman form. Fresh from its sojourn to Seoul earlier this month, where it showed off its latest see-now, buy-now collection, the brand popped up in Paris on Wednesday. It’s all a part of its push “to show the brand in different countries and to become more known”, according to creative director Johnny Coca, who joined the heritage house famous for its much imitated Bayswater and Alexa handbags in 2015.

When it comes to the collections, however, the UK is a regular source of inspiration for Coca. Whereas in previous collections he has explored rebellious and aristocratic icons, the spring/summer 2019 collection shown in Paris this week drew from the swinging sixties, a period “of freedom, emancipation and revolution”, according to the designer. Psychedelic prints and patent rain macs with big buttons were met with multicoloured platforms and go go boots – the uniform of starlets such as Twiggy, Jean Shrimpton and their imitators on Carnaby Street and King’s Road. “The 60s is one of the strongest moments in the UK for music, art, design and the power of the girls. They took the power and decided how they wanted to be.”

Coca’s celebration of the UK – the brand’s largest market at 70% – comes a month after the UK retail market was shaken with House of Fraser entering administration. While Mulberry took a £3m hit in missed payments from the department store, CEO Thierry Andretta maintains it is an important stockist: “A lot of British people [have] loyalties to [it].”

This ode also comes at the same time as a pressing concern for Mulberry: the implications of Brexit. Despite it being the market leader in leather goods and having its own production line based in Bath and Somerset, the company is limited in terms of the materials it can source and so relies upon mainland Europe.

“[What] is challenging is what will happen with the pound and if one day there will be some kind of duty barrier that will influence [our] price point,” said Andretta at the presentation. “In terms of leather, we can’t even buy in the UK, there is not enough. We are buying 5 to 10% of our leather and material there, but really … there aren’t the tanneries. It has to be Italy… they have the biggest tanneries. If there will be a duty, it will affect the price.”

High price points have posed problems for Mulberry in the past. The company was forced to drop them after they were hiked up in an ill-fated strategy by former CEO Bruno Guillon in 2012, alienating a large number of loyal customers. Now, two-thirds of bags sit under £1,000, relatively low by luxury standards. “We are still committed to [keeping prices affordable] as we understand there is a psychological barrier – for us it’s the £995 mark,” said Andretta, who joined the company in March 2015. “London doesn’t present a price barrier because 40% of consumers are international tourists – people that can really afford to spend more, but we do 75% of our business in the UK outside London, so it needs to be more accessible.”

Andretta is confident that its digital drive (digital sales currently make up 17% of overall turnover) and investment in omni-channel retail experiences, like its new Regent Street flagship, which opened last month, will secure the longevity of the brand, as well as its new entity, Mulberry Korea (hence the show and trip last week).

“For us, it’s an obligation to focus internationally – for example, 85% of the future luxury consumers come from China,” Andretta said. “You can perform well in the US for example, but it’s a mature market. You can perform really well if you are able to target the Chinese market and the digital generation. They are the ones that are buying and travelling around the world.”