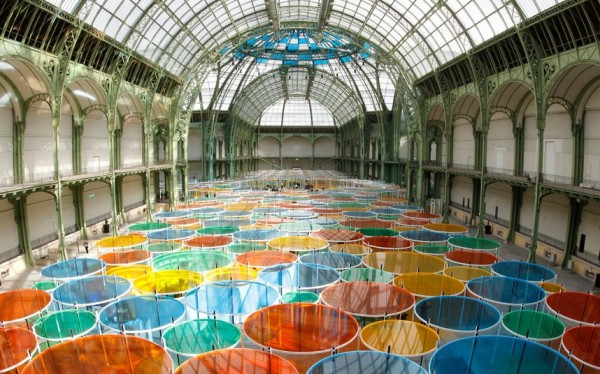 The annual Paris’ Monumenta exhibition invites an internationally renowned contemporary artist to produce a monumental work
especially for display in the glass-roofed nave of the Grand Palais in Paris.

An initiative of the French Ministry of Culture and Communication, the concept has proven hugely popular. The exhibition has
so far featured Anselm Kiefer in 2007, Richard Serra in 2008, Christian Boltanski in 2010 and Anish Kapoor in 2011. The guest
artist of 2012 is French conceptual artist Daniel Buren.

The overall effect is quite magical, wrote the guardian, but does Buren do more than decorate the space? It is all very ambient, and very pretty (not a word I often use in a positive way) but, the longer one stays, the more the visual complications of his project multiply. The posts take on the colours of the light, which sings along their vertical edges. When the sun is out, the world is reflected upside down above us, and the circles of light projected on to the floor come into disconcertingly sharp focus.