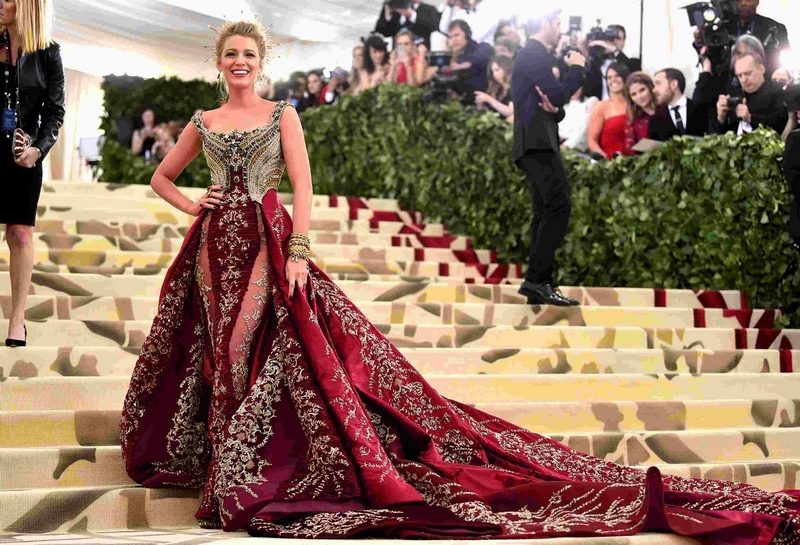 This article titled “Met Gala 2018: let us give thanks for the best dress code of all time” was written by Jess Cartner-Morley, for The Guardian on Tuesday 8th May 2018 13.20 UTC

It took curator Andrew Bolton several years to convince the Vatican to give its blessing to Heavenly Bodies: Fashion and the Catholic Imagination, the blockbuster show at the Metropolitan Museum in New York that explores divine inspiration in fashion. One imagines Rome’s reluctance stemmed from concern that the exhibition – and particularly the opening night gala, which has become known for its outrageous outfits – would trivialise religious imagery.

It needn’t have worried. Fashion takes clothes very, very seriously. In a world in which dressing up matters and sartorial symbolism carries a very real weight, the Met Gala is the most important night of the year. Even when it looks absurd to outsiders – remember the omelette dress of 2015? – the fashion seen on the Met Gala red carpet has been considered and planned with the solemnity of a papal conclave. In their Manhattan hotel rooms, celebrities dress for this event with a level of meticulous ceremony which would befit a Sunday at St Peters.

This year’s dress code was a challenge. To succeed on this red carpet required honouring the theme of Catholicism in fashion without being seen to make fun of it. What is special about the Met red carpet – by comparison, for instance, with Cannes – is that you can’t win it just by looking good. A supermodel can wear a tight dress and high heels and sail through almost every other public occasion with flying colours, but that look is a fast track to being completely ignored at the Met. You have to dig deep for this night, because Met Gala triumph requires not just beauty but bravery and a leap of faith. The Vatican would surely approve.

The obvious link between the world presided over by Pope Francis and the one ruled by Queen Anna Wintour is that clothing delineates status. Rihanna attacked this theme with her signature fearlessness and blew everyone else out of the water. In the season of the first Millicent Fawcett statue and of a Christian Dior slogan T-shirt namechecking Linda Nochlin’s feminist essay “Why Have There Been No Great Women Artists”, RiRi gave us a female pope. She wore a heavily embellished mini dress under a matching cloak, accessorised with a pointed mitre, stiletto heels and pearls strung around one ankle – because, after all, there’s not always room for a rosary in a clutch bag – all created for her by John Galliano for the house of Maison Margiela. The look was a version of an ensemble designed by Galliano during his time at Christian Dior that appeared on the catwalk in 2000 worn by a man, and is included in the Met exhibition.

But clothes are never only about power, either in fashion or in the church. Beauty as a metaphor for human goodness runs through the history of art, through religious iconography and through the way fashion worships at the altar of beauty and glamour. Katy Perry was a triumph in Versace. In a gold dress and boots, and with a 6ft white feathered wingspan, she was arguably the most breathtaking representation of the archangel Gabriel since Fra Angelico painted the Annunciation fresco in the Convent of San Marco. (And yes, I do realise how sacrilegious that is, in artistic terms.)

Sienna Miller in gold and white Louis Vuitton was also divine as another Renaissance angel on the red carpet.

The transactional business of fashion is a multimillion-pound industry precisely because it taps into powerful emotions and desires. Fashion deliberately blurs the boundaries between things that you have the power to change and the things you don’t. (You can buy the perfect party dress, but you can’t actually buy romance or joy or fun.) Religious imagery has long employed the same porous boundaries, conjuring the invisible into life. The word halo – an accessory seen last night on Solange Knowles in Iris Van Herpen and Lily Collins in Givenchy, among others – means glory. And the aesthetic of papal garments has roots in worldly power, as well as spiritual. When the Emperor Constantine moved his capital east to Constantinople and allowed the pontiffs to assume control the old capital, Rome, they incorporated some of the clothing and accessories worn by the Roman emperors who had ruled before them, the better to legitimise their power in the eyes of the people of Rome.

Like all the best dress codes, the Met Gala invitation allowed for lots of individuality. Frances McDormand consolidated her role as 2018’s designated maverick by coming as “a pagan”, she said on the red carpet, in her Valentino butterfly headdress. Those actors who have pledged vows to fashion houses (or at least, signed contracts with them) showed their constancy with looks that mined clerical robes for the most this-season silhouette. A clear winner on this is the mozzetta, a short shoulder-covering robe worn by the pope and cardinals and, last night, by a very chic Alicia Vikander in Louis Vuitton. Kate Moss wore a black dress with a feathered black neckline that nodded to the dress code with a fallen-angel vibe – this was her first appearance in the US since 2009, and there was speculation that the prolonged absence was due to difficulty procuring a visa after the drug scandal of 2005 – but mainly referenced herself. Moss in a black feather trim dress, with Johnny Depp at Cannes, and a messy bun, is a late-1990s fashion reference the fashion faithful will immediately recognise.

Best red-carpet quote of the night, though, goes to the actor Lena Waithe, who wore a rainbow flag cape to spotlight the Catholic church’s complicated relationship with the LGBTQ community. “The theme to me is, like, be yourself,” she told the New York Times on the red carpet. “You were made in God’s image, right?”