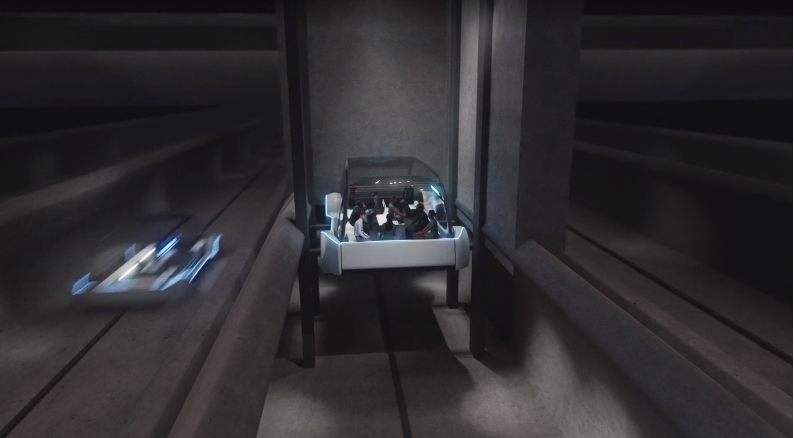 This article titled “Elon Musk wants to put tunnels under LA – but they might not fit his Tesla” was written by Mark Harris in Seattle, for theguardian.com on Wednesday 9th May 2018 10.00 UTC

In December 2016, Elon Musk was stuck in Los Angeles’s infamous traffic again, likely in his personal Tesla Model S. “Traffic is driving me nuts,” he tweeted. “Am going to build a tunnel boring machine and just start digging.”

Musk was true to his word, and quickly formed the Boring Company, buying an old tunnel boring machine (TBM) and excavating at his SpaceX factory. The Boring Company now wants to build a longer “proof of process” tunnel 2.7 miles beneath LA. This could form the backbone of a larger transportation network across the city, called Loop, with electric “skates” whisking people, bikes and cars from station to station at speeds of up to 150mph.

The only problem is, Musk’s own Tesla probably won’t be able to fit in it. A 1,600-page document filed with LA city officials specifies the dimensions of the tunnels and the vehicles they could accommodate – and that doesn’t include the Tesla Model S or Model X.

Related: Is Elon Musk’s plan for a road network beneath LA more than a pipe dream?

A table detailing the operational assumptions of Loop says “D segment car is largest size”. D-segment cars, the European equivalent to an American mid-size, are typically 73in wide. The Model S measures more than 77in and the Model X is wider still. Even the original Tesla Roadster is too broad. Only the Model 3 will likely be able to squeeze underground.

The Boring Company told the Guardian that the initial focus of Loop will be transporting people and bicycles, but admitted that there would be a limit on which passenger cars could travel on future versions. A key part of Musk’s plan for his subterranean network is that its tunnels will be much smaller than normal road tunnels, and thus cheaper, easier and quicker to build.

“The current standard for a one-lane tunnel is approximately 28ft,” reads the Boring Company’s FAQ. “By placing vehicles on a stabilized electric skate, the diameter can be reduced to less than 14ft. Reducing the diameter in half reduces tunneling costs by 3-4 times.”

While the Boring Company awaits permission to start digging its “proof of process” tunnel, it continues to work on the tunnel at the SpaceX campus in Hawthorne. Pictures and videos on its website show a partly constructed tunnel with a large ventilation duct. This tunnel has been inspected at least twice for occupational health and safety, during which it received eight violations and a total of $1,810 in penalties for minor infractions involving walkways, cranes and railings. The company says that none of the violations occurred inside the tunnel itself.

Despite its modest achievements to date, the Boring Company is pushing on with more ambitious plans. It is working to get permissions to start digging two tunnels beneath the Baltimore-Washington Parkway to connect the cities, and it has been shortlisted to design, build, finance, operate and maintain a new express link between O’Hare airport and downtown Chicago.

In December, the California Alternative Energy and Advanced Transportation Financing Authority granted the Boring Company a $266,000 sales tax exclusion to build a new, fully automated concrete rings manufacturing facility. According to the company’s proposal, the $3m facility will produce concrete for its tunnels four times faster than existing processes, with 20% less energy and air pollutants. It says the facility should be up and running within 12 months.

That might be later than the famously impatient Musk wants, but could be much sooner than is needed. In April, the mayor of Culver City, where the proof of process tunnel would end up, wrote a letter to his counterpart in Los Angeles. It complained that the project was not clearly defined, used the wrong checklists, and contravened the California Environment Quality Act on several points.

“The initial study does not adequately evaluate the project’s impacts [on] … public utilities and public transportation; and impacts from tunneling, which may include ground failure, settlement … noise and vibration impacting nearby sensitive receptors such as medical facilities, clinics or media uses,” he wrote.

It seems like the Boring Company may be doing something even more boring than boring in the months and years ahead – digging its way through a mountain of laws and regulations.