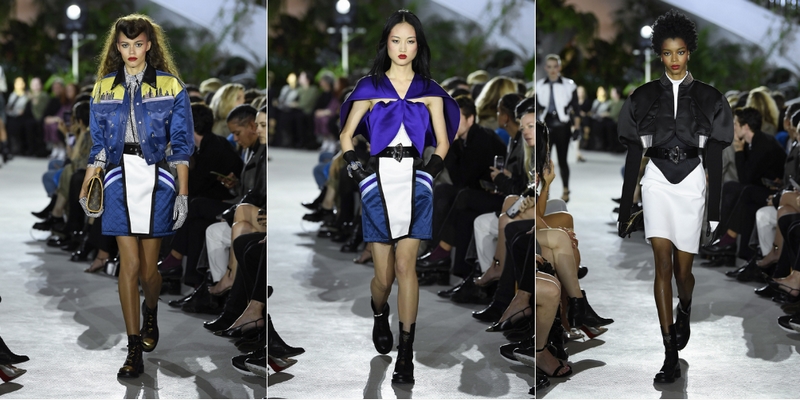 This article titled “Louis Vuitton pays homage to New York in embellishment-heavy JFK show” was written by Scarlett Conlon, for The Guardian on Thursday 9th May 2019 13.09 UTC

No sooner had the feathers been swept off the steps of the Met following the glittering gala opening to the Camp: Notes on Fashion exhibition on Monday night in Manhattan, then another iconic New York location was playing host to a fashion spectacle.

French fashion juggernaut Louis Vuitton took over the once-abandoned Trans World Airlines terminal at JFK airport for its 2020 resort collection. The mid-century space was designed by Finnish architect Eero Saarinen and completed in 1962, yet has been closed since 2001 when the TWA airline ceased operations.

Following a luxury restoration paying homage to the golden age of travel in which it was built, it is now primed for a grand reopening as a hotel complex on 15 May, but not before being transformed into a catwalk by France’s second-oldest couture house.

Accordingly, the 60-look collection paid homage to New York, which the show notes referred to as “the world’s most cinematic city”. Through creative director Nicolas Ghesquière’s futuristic lens, tailoring took on a Wall Street sensibility, with pinstripes, peaked lapels and power shoulders.

Embellishment featured heavily, with twinkling embroidered and appliquéd brocades on dark silhouettes to create “a Gotham City ambiance” and black leather was moulded into shield-like headpieces and Batman-style body armour.

More obvious odes came via a postcard scene of the city’s skyline printed across a leather jacket, the architectural proportions (a Ghesquière signature) and the dazzling Deco lines so synonymous with the Chrysler building that came on both clothes and bags.

As the jewel in the Louis Vuitton crown, the latter came as prototypes of classic designs – from bowler shapes to box clutches – featuring electronic moving images.

These strong silhouettes filtered down to the footwear, which mainly comprised flat chunky boots and are a continuation of what Ghesquière presented at his show in Paris in March.

At the time, he addressed his decision to abandon heels, saying that he no longer felt he needed to “put women in high heels to empower them”.

This week, in the former TWA terminal building, its sentiment took on extra poignancy, pointing to the chasm that exists between the high-heeled polished flight attendants who would have walked its halls 40 years ago and the ones that will march through it now.

In decamping to New York, Louis Vuitton is one of a growing number of brands who are taking their shows to far-flung destinations to attract global markets. This month Paris-based Christian Dior relocated to Marrakesh to unveil its new collection, while next month Milan-based Moschino and Prada are decamping to the Universal Studios backlot in Hollywood and Shanghai respectively.

Such relocations are a part of a wider strategy to raise revenues and one that for Louis Vuitton owners, LVMH, appears to be paying off. The conglomerate reported first-quarter sales for the group were up last month with sales at its leather goods unit, which is largely driven by Vuitton, up 15% and succeeding analysts’ expectations.