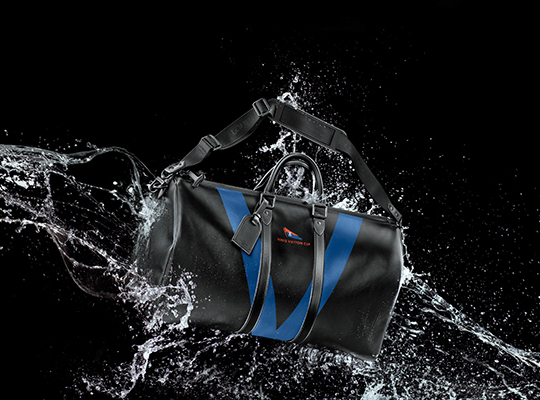 Invented in 1930, Keepall name derives from “Keep all”. The durable, roomy and light holdall was the fore-runner of the modern bags. It was a favorite travel item for Marlène Dietrich, Jackie Kennedy, Catherine Deneuve and Angelina Jolie.

The new 2012 black canvas Waterproof Keepall 55 Bandouliere incorporates a number of innovative technologies being crafted using a high-frequency ultrasonic welding process, no stitches or leather. The bag is available in the signature colors of the Louis Vuitton Cup.

To be contested in 2013 on San Francisco Bay, the Louis Vuitton Cup will see challengers from around the globe battle each other for an opportunity to race in the subsequent America’s Cup Finals.

Louis Vuitton will also serve as Official Timekeeper for the 34th America’s Cup.

“We are thrilled to continue our 30-year partnership with the America’s Cup,” said Yves Carcelle, Chairman and CEO of Louis Vuitton Malletier. “We believe that the 34th edition will be the best America’s Cup yet.”