Global High Net Worth Population Increases Slightly as Their Investable Wealth Declines
Asia-Pacific becomes region with the most HNWIs, while North America retains the most HNWI wealth 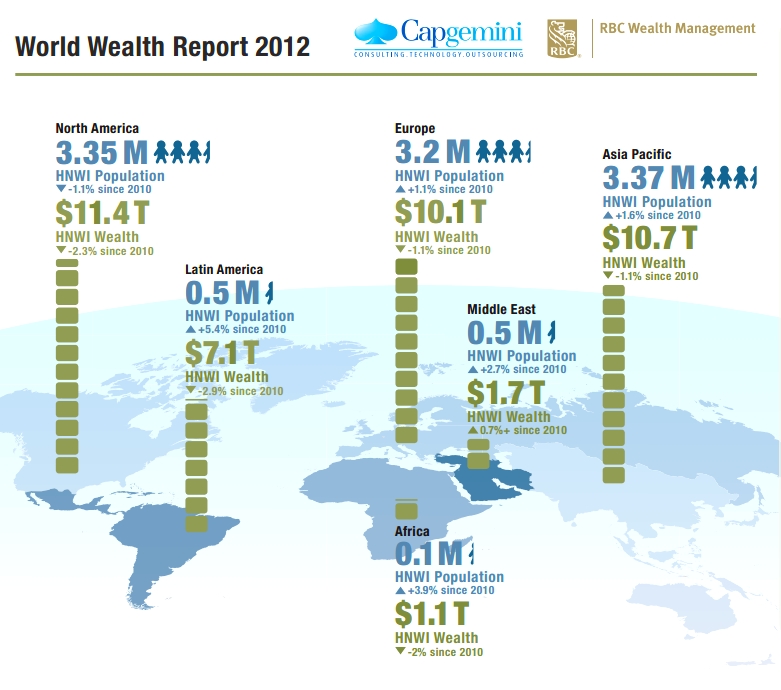 Asia-Pacific surpasses all regions with the largest HNWI population, while North America retains the most HNWI wealth, finds Pacific, Capgemini and RBC Wealth Management’s “World Wealth Report“, a study which looks at trends that affect high net worth individuals (HNWIs) around the globe.

The overall financial wealth of high net worth individuals (HNWI1) declined across all regions in 2011, with the
exception of the Middle East, according to the World Wealth Report 2012.

The HNWI population country ranking saw South Korea replace India for the 12th position, while the top three countries, U.S., Japan and Germany, retained 53.3 percent of the total share of HNWIs, slightly up from 53.1 percent in 2010. Of the top twelve countries by population, Brazil saw the greatest percentage rise (6.2 percent) in the number of HNWIs.

“While more people surpassed the US$1 million disposable income level in 2011, the aggregate wealth of high net worth individuals declined overall, as market volatility took its toll,” said George Lewis, Group Head, RBC Wealth Management. “It is significant that for the first time this year there are now more high net worth individuals in Asia-Pacific than in any other region. However, losses in key markets such as Hong Kong and India meant that wealth contracted in Asia-Pacific overall..”

Following a period of near normalcy in 2010, volatility levels spiked in 2011 reaching a peak in November 2011 due to widespread concerns that the Eurozone’s debt crisis might overwhelm some larger economies. Although European Union leaders have taken steps to contain the sovereign debt crisis, weak growth and challenges in the Eurozone are expected to add to the volatility in 2012.

“Europe will be top of mind for investors, as repeated flare-ups are likely to keep markets on edge. Additional drivers such as the economic performance in China, mature market headwinds, global political leadership changes and policy decisions will all play key roles in determining whether 2012 drives increases in HNWI wealth or further losses,,” said Jean Lassignardie, Corporate Vice President, Capgemini Global Financial Services.

Uncertainty drove many investors to safe-haven assets in 2011. Economic drivers of wealth were also diversified in 2011, affecting asset classes and producing varied results, with equity and commodity performance on the decline, tangible investments losing value, and investor preferences moving toward capital preservation through cash and fixed income. The best-performing asset class was fixed income, with the price of long-term U.S. Treasuries reaching historic highs.

Moving forward, say the authors of the study, HNW clients will need to prepare themselves for ongoing market volatility and extended periods of bimodal investment outcomes, with returns likely to be extremely positive or extremely negative, rather than equally distributed, the report concludes.