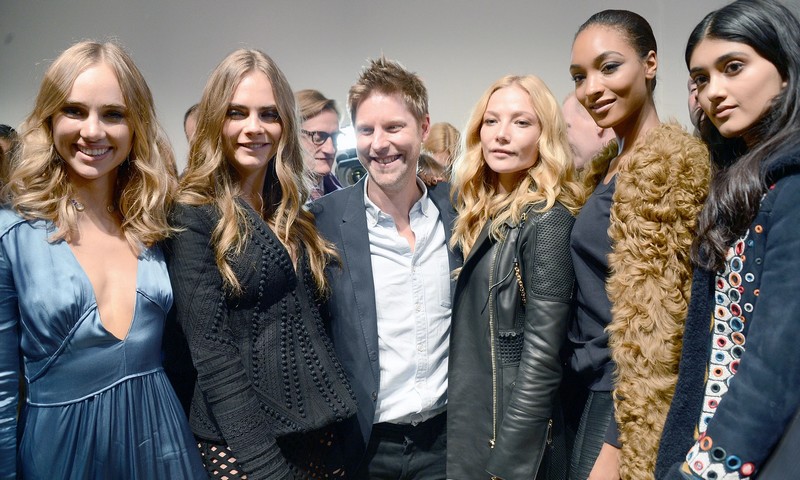 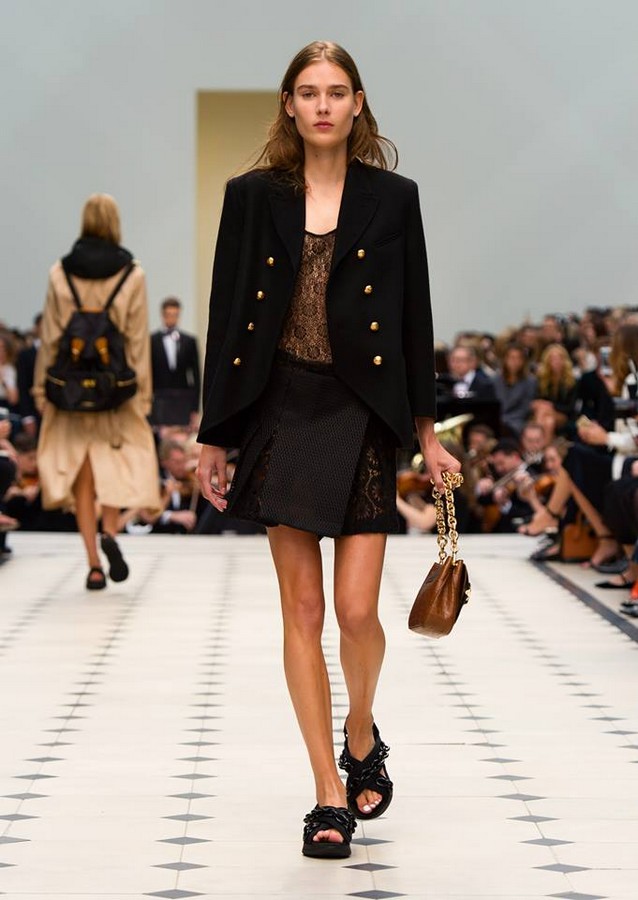 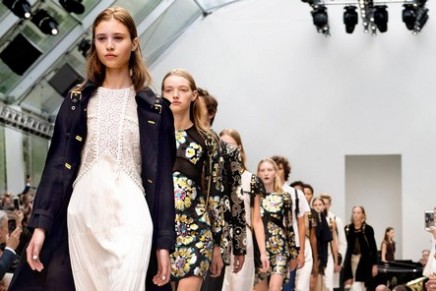 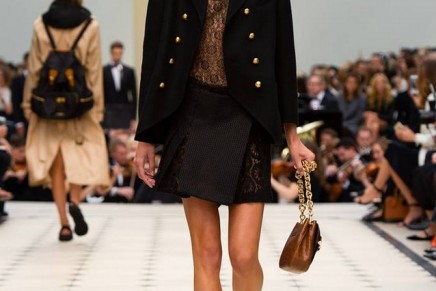 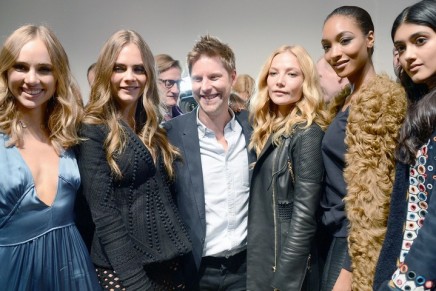 This article titled “London fashion week: Burberry and Christopher Kane look to the stars” was written by Jess Cartner-Morley, for theguardian.com on Monday 21st September 2015 18.20 UTC

When your catwalk show is prefaced by Benedict Cumberbatch kissing his hellos with Sienna Miller and Kate Moss before waving to Anna Wintour across the 32-piece orchestra warming up in the middle of the catwalk, and Cara Delevingne is holding hands with girlfriend St Vincent on the front row as Alison Moyet stands up to sing, it is fair to say your brand is riding pretty high in the status stakes.

At which point, it is perhaps possible to relax a little. In the 14 years he has been at Burberry, Christopher Bailey has elevated the brand out of all recognition, from dodgy checks to A-list chic. He has done so by aligning Burberry with high-taste reference points, from Lucian Freud and the St Ives painters to vintage books and the Bloomsbury group.

This was different: a more youthful streetwear influenced Burberry collection. Enter oversized hoodies – double-faced cashmere, but still – and black gabardine rucksacks in the place of structured It bags. Slouchy trousers were worn with grungy see-through lace vests, and the floor-length glamour-gowns came oversized instead of corseted, and with wrinkles set into the ivory silk. Bailey even ended the show by swapping his bow for a bouncing run along the catwalk, the trademark show ending of streetstyle king Alexander Wang.

Backstage after the show, Bailey wasn’t quite ready to call the look “street”. (“There was more ease to it, let’s say,” he demurred.) But he did say he had looked to amplify the more casual, accessible side of Burberry products, because “the casual pieces in the Burberry Brit range are as relevant to who we are as the very elegant Burberry Prorsum pieces”.

He wanted to reflect “the way that social media has changed the world. There are no boundaries between cultures any more. High blends with low, and when it is winter in one place it is summer somewhere else.” This collection had broken down one of the fashion industry’s traditional barriers before it even made it on to the catwalk, by being previewed on Snapchat the day before it was seen at London fashion week.

Christopher Kane’s catwalk was staged in the Sky Garden at the top of the Walkie Talkie tower, a venue that promises glorious views across London – but not on this blustery autumnal day, when cloud and rain turned the glass windows into a moody grey filter over the cityscape. Kane was delighted. “I love how gloomy it is. This is exactly what I wanted,” he said. “Bring it on.”

The stormy weather matched a collection born out of a dark period for Kane, whose mother died earlier this year. The central motif was a car crash, which Kane had latched on to as a metaphor for psychological damage. That train of thought took him to John Chamberlain’s 60s sculptures made from car body parts, tangles of aluminium in lurid colours that appealed not only to Kane’s inner turmoil but to his taste for acid brights, and his fondness of the seatbelt strap and buckle, which are signature details on his clothes.

This was a collection about heartbreak, rendered in Technicolor. Kane spray-painted dresses in his studio, sending the results to an Italian factory to recreate in print. On the catwalk there were black cocktail dresses with shards of bright plastic cut into them, like broken stained-glass windows, and acid pile-ups of pink, yellow and green lace. Plastic cable ties in bright colours – “which made me think of restraint, and madness” – were used as fastenings on clothes, as ponytail bands, and as chokers.

Kane was just 24 when he began showing at London fashion week and he has always worn his heart on his sleeve. This punchy, uncompromising collection showed a directness that the sale of 51% of his business to Kering two years ago might have been expected to dissipate, but has not. Kane said it was “about an outsider, a woman who is unsophisticated but so cool”. Some looks, like a loose-knitted oversized cardigan falling from a shoulder over a slip dress, had a grungy mood, but the execution was precise rather than sloppy. A journalist who complimented Kane on the delirious shades of neon lace after the show was politely corrected. “Acid, not neon, actually.”