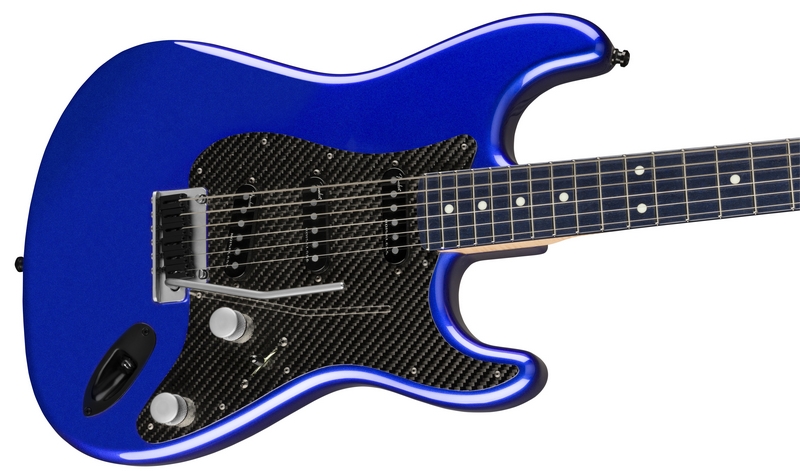 “Collaborating with Lexus to conceptualize, design and build the Fender Lexus LC Stratocaster has been an incredible ride,” said Mike Lewis, VP of product development, Fender Custom Shop. “The process our team took to design this Strat has certainly been a labor of love, as well as a source of inspiration and excitement around the shop. Our team is constantly building innovative products and this launch is another great representation of craftsmanship and creativity at Fender.”

The Stratocaster guitar includes an omnidirectional Structural Blue finish, a spectral range that produces light metallic blue to deep midnight blue that was originally inspired by the Morpho butterfly. The paint on the Stratocaster guitar is the same paint that was used on the Lexus LC 500 coupe and convertible Inspiration Series, of which only 200 total vehicles were produced for the US. Structural blue paint brings to life the rich curvature of the LC 500 body, and now the guitar body. The paint does not contain any blue material — it looks blue only because of the interference of light. Layers of colorless materials come together to generate the ultimate color, hence the name “structural.” 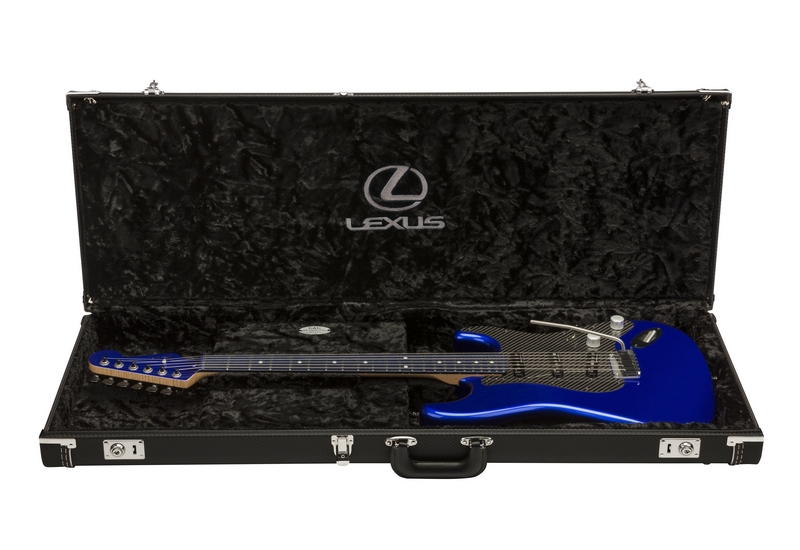 The neck is fashioned from beautiful 3A flame maple and finished in high-gloss urethane, imparting a hint of Fender woodworking tradition in contrast with the instrument’s other advanced visual elements. The fingerboard is made of deep-blue polished Richlite, a composite material known for its tonal properties, structural stability and resistance to wear and moisture, and used by the Fender Custom Shop for the first time. The fingerboard has a flatter 12″ radius and 22 medium-jumbo stainless steel frets. On darkened stages, the white Luminlay fingerboard inlays glow in vivid blue.

Additionally, the fasteners on the pickguard are black button head machine screws that create a clean automotive appearance, while the pickups are Fender’s latest version of our Noiseless Single Coils, another first for the Fender Custom Shop. To top it off, the headstock face is finished in Structural Blue with a chrome Fender logo while the custom case is wrapped in carbon fiber textured vinyl, with black leather ends and the Lexus logo embroidered inside the lid.

“When we saw the first iteration of this Stratocaster, we couldn’t believe how well it matched the original LC 500 Inspiration Series,” said Vinay Shahani, vice president of Lexus marketing. “It’s amazing to see this partnership come together based on our respective brands’ mutual admiration for one another. Seeing our Structural Blue color represented in this Stratocaster guitar illustrates endless possibilities of creativity, and we’re honored to have been a part of this creation.”

Every day, the Fender Custom Shop’s esteemed Master Builders are challenged to build guitars and basses with no boundaries. To match Lexus’s sound systems configuration, Principal Master Builder Ron Thorn included custom machined brushed aluminum knobs to match the Mark Levinson stereo knobs, while reducing the quantity from three typically found on a Stratocaster guitar to two — Master Volume and Master Tone. The fretboard is a polished deep blue Richlite, a material new to the Fender Custom Shop and selected exclusively for this build given the similar components it has with Lexus vehicles.

“As a deep car enthusiast, this was a fun project to build off. We went bold with the technical specs to make this model a living Lexus guitar. I can’t wait to see how everyone rocks out to it,” added principal master builder Ron Thorn.

“We are thrilled that the Lexus-developed Structural Blue paint technology is being applied to a Fender Stratocaster”, said Christopher Yang, vice president of portfolio business management. “To help bring such ideas to market, we will continue to explore opportunities, such as the partnership with Fender, to share our technology and intellectual property with partners across multiple industries.” 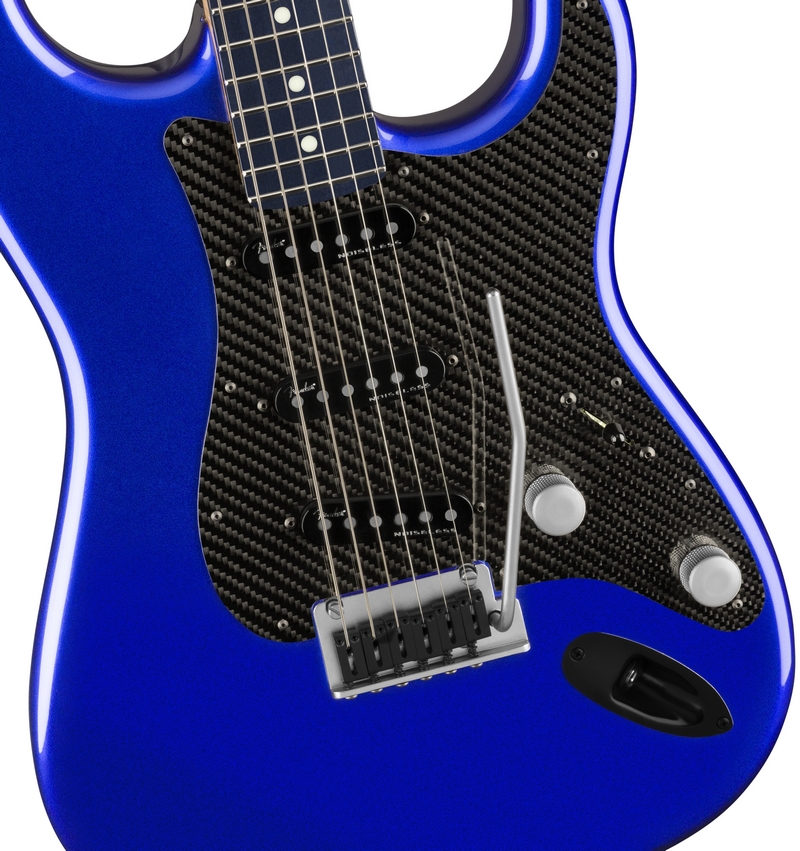 The all-new master designed Fender Lexus LC Stratocaster guitar is the newest custom-built piece designed by Fender Custom Shop Principal Master Builder Ron Thorn. The guitar features an omnidirectional Structural Blue finish — a spectral range that produces a light-metallic to deep midnight-blue color inspired by the Morpho butterfly, whose uncommonly large iridescent-blue wings create the illusion that the beautiful insect disappears and reappears in mid- flight. Until now, the only other use of Structural Blue has been on the Lexus LC 500 Inspiration Series coupe and convertible.

The fasteners on the guitar’s pickguard are black-button machine head screws that create a clean automotive appearance, and the latest version of Fender’s
Noiseless pickups are used here by the Custom Shop for the first time. The fingerboard is a polished deep blue made from Richlite, a material new to the Fender Custom Shop and selected exclusively for this build given its similarity to components in Lexus vehicles. To match the Lexus sound system configuration, Thorn included custom machined-brushed aluminum knobs to match the auto’s Mark Levinson knobs while reducing the typical number of Stratocaster guitar control knobs from three to two — Master Volume and Master Tone. 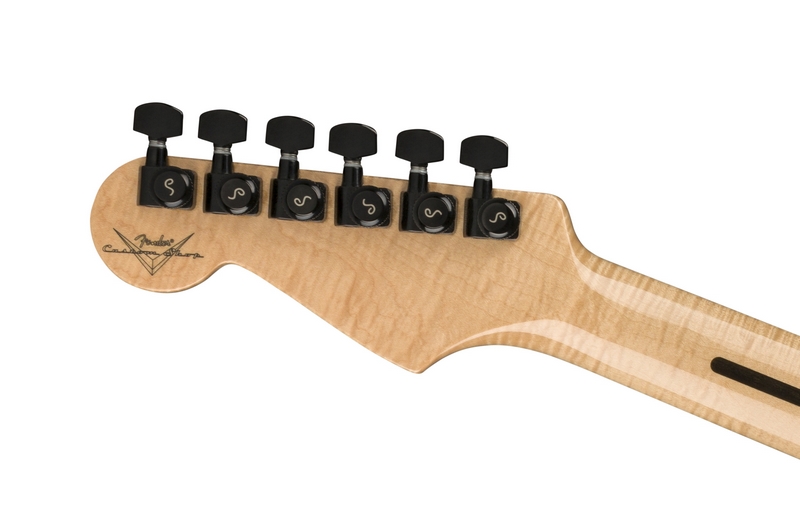 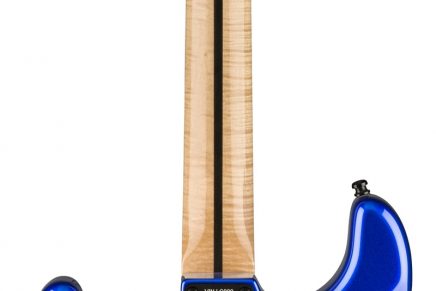 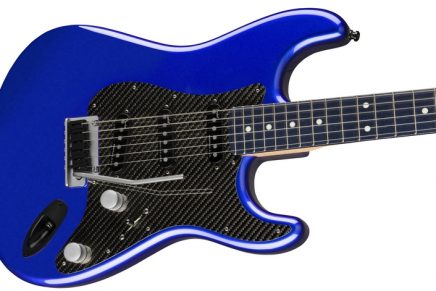 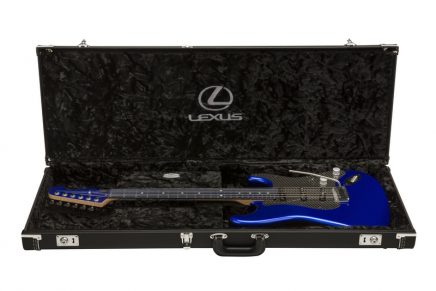 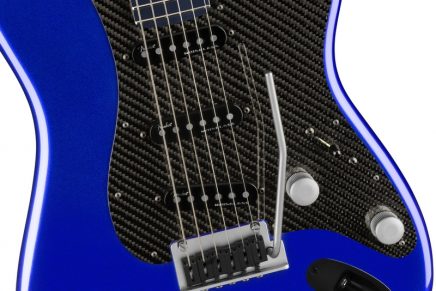 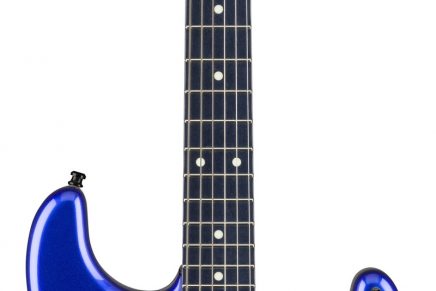 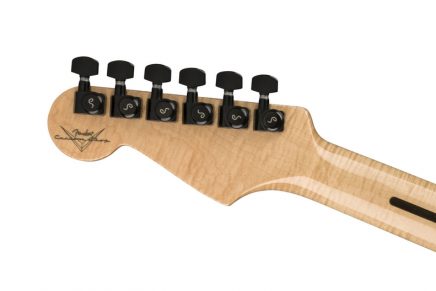