“Love Stories – A Sentimental Survey by Francesco Vezzoli” is a new project curated by Eva Fabbris to be presented on Fondazione Prada Instagram account from 11 May 2020. With this new project, the artist Francesco Vezzoli explores the emotional, psychological and sentimental status of a wide online community through social media language. 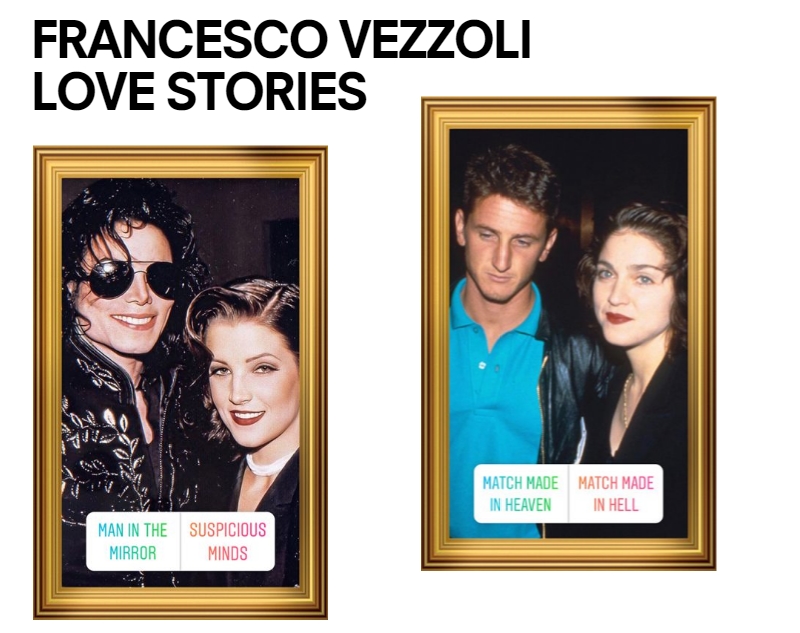 This article titled “Is Jenny from the block or the yacht? The poll taking the temperature of our times” was written by Tim Jonze, for theguardian.com on Tuesday 5th May 2020 12.44 UTC

“I haven’t seen a human being for 65 days,” says Italian artist Francesco Vezzoli from his home in lockdown Milan. “I think I’m developing a very tiny bit of agoraphobia.”

As an artist whose work so often involves people gathering for grand social occasions – among other things he’s convinced Gore Vidal and Helen Mirren to create a trailer for an imaginary remake of Caligula and persuaded Kate Moss to DJ at a 24-hour exhibition in Paris – quarantine does not come naturally for Vezzoli. It doesn’t help that he’s originally from Brescia in the north of Italy – “one of the biggest red dots in Europe” as he puts it.

“It’s been incredibly intense,” he admits. “I found myself going online at three in the morning, to check the local newspapers to see if there were people I knew among the dead. When you’re living alone the news can get in your head. So you calling me right now is the perfect excuse to change the channel!”

Luckily for Vezzoli, fashion house Prada also came calling recently with a welcome distraction. They’ve commissioned him to make Love Stories: A Sentimental Survey by Francesco Vezzoli, a fun (if entirely unscientific) way of taking a snapshot of the Italian mood during this emotionally fragile time. “It has been the biggest gift of my life,” laughs Vezzoli. “They’ve managed to take my brain away [from the pandemic].”

The project was commissioned with lockdown in mind, but Vezzoli says he’s long dreamed of hiring one of the big polling companies to survey his nation’s emotional state. Instead of a pollster, though, he’ll be using the poll function on Instagram Stories – each weekday from 11 May an image of a famous couple will appear and viewers will be able to vote for one of two pithy phrases written by Vezzoli. For example, a photograph of Miss Piggy and Kermit will offer the audience the choice between “non-binary couple” and “a love supreme”; an image of James Dean and Marlon Brando gives you the options “Slave & Master” or “Hair & Make Up”. It’s not all pop culture – some couples are taken from paintings by Caravaggio or Toulouse-Lautrec.

“And there’s one picture of Queen Elizabeth and Princess Margaret,” says Vezzoli. “They’re both looking at something that we don’t see in such a different way. Under the Queen the word says ‘finding’ and under her sister I put ‘looking’.”

The project is, he says, about the complexity of relationships, as well as acting as a cultural barometer: “It will be interesting to measure how many people react to each image – have they forgotten certain icons that maybe in the art world we think are totally recognisable but are no longer relevant to a younger generation?”

Each week’s results will be posted on Saturdays, and on Sunday Vezzoli has invited an array of cultural critics, historians and artists to comment on them, from Klaus Biesenbach, the director of Moca in Los Angeles, to “the most important ancient art historian in Italy” Salvatore Settis. I wonder how these critics will be expected to make sense of the poll’s results, given they seem rather open to interpretation – but that, Vezzoli says, is the whole point. “I have no idea what will happen!” he laughs. “The beauty of the project is that these people have total freedom to make their own interpretation of other people’s interpretations. Everything is up for critical grabs. It’s all a big collaborative game, a distraction … just a lot of fun to be honest.”

Vezzoli’s work often seems “just a lot of fun”. It can be flashy, gleefully shallow, a little daft – but dig deeper and it contains political undertones. In 2009 he filmed Natalie Portman and Michelle Williams wrestling over a perfume bottle in an advert for a fake fragrance called Greed – all quite silly, yet clearly a satire on the Berlusconi era too.

This work is no different, says Vezzoli. “There’s an image of Ronald Reagan dancing with Imelda Marcos where they’re both dressed in white satin,” he says. “So of course if you figure out who they are you start asking – why is the president of the United States dancing with the wife of a dictator? Did this really happen? So I think most of the questions are political, even if it’s just asking if Jenny is from the block or the yacht.”

What Vezzoli seems most proud about with Love Stories is the fact that it’s a genuinely digital artwork. “You’re seeing galleries trying to digitise themselves in this moment … but being digital doesn’t mean a drone with a camera flying around your institution! Online viewing rooms are just analogue ways of thinking put online. With Love Stories, I don’t say if it’s a good exhibition or a bad one, but it’s a real digital exhibition.”

It’s tempting to think that such projects will become commonplace as coronavirus changes the art landscape, but Vezzoli advises caution with any bold predictions: “After the Lehman Brothers crash there was a naive hope that it might bring a higher degree of morality into the art world,” he says. “Instead we saw the opposite – the rich in the art world got richer, the rest got wiped away. When this is over people may end up bingeing on comfort food rather than nouvelle cuisine. But then hopefully, after that, there will be an explosion of something completely new.

“The world has seen tragedies like this before but never within a hyper-technological environment,” he continues. “We have no idea how this will impact on our brains. I haven’t left my apartment for so long that it has generated in me new emotions that I’ve never dealt with before. It’s unfathomable. I just hope that gentleness will be one of the feelings people respond with.”

And will this project at least give the isolated Vezzoli a greater sense of human contact?

“Oh yeah!” he exclaims. “Even just this interview is making me feel more human, more alive again! It’s been very healthy for my brain and for my heart.”