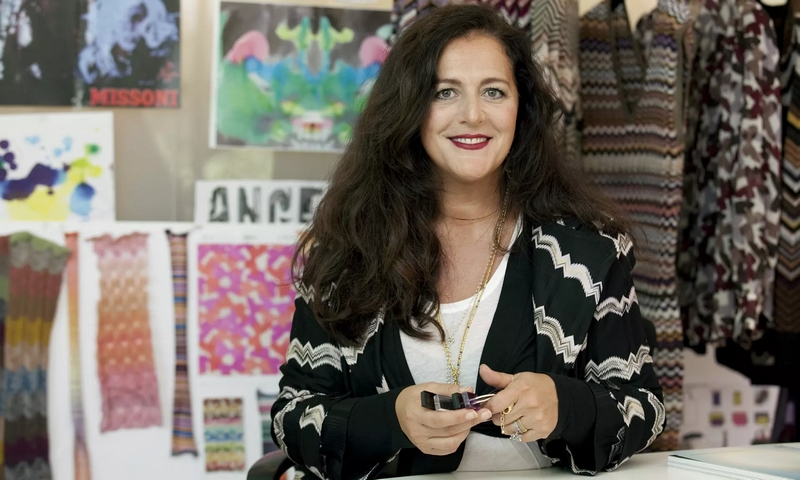 This article titled “Italy’s Missoni survives 65 years in fashion as a family affair” was written by Jess Cartner-Morley, for The Observer on Saturday 22nd September 2018 20.30 UTC

To many people, the Missoni name stands for zigzags. But to Angela Missoni, who for 21 years has led the label her parents founded in 1953, the first word that springs to mind is “survival”.

“It feels like a miracle that we are still here,” said the designer in her Milan showroom, where she was finessing looks for a catwalk show and gala dinner on Saturday night to celebrate Missoni’s 65th year in fashion. “In my career, I have seen so many names come and go, including some that I thought would be around for ever.”

In their anniversary year, the Missonis took the radical step of relinquishing family control, selling a 41.2% stake to a private equity firm for an investment of €70m. Over the past decade, the consolidation of power in the fashion industry in the hands of luxury firms such as LVMH and Kering has made it increasingly difficult for smaller brands to compete for a viable market share. The Missoni deal was finalised in June, the same month as designer Dries Van Noten announced the sale of a majority stake in his eponymous label to the Spanish group Puig.

Italy’s proud tradition of family-owned fashion labels is struggling to hold back the tide of change. In 2014, the Versace family sold 20% of their company to Blackstone. But it is Missoni’s future as a family business that Angela Missoni believes she has safeguarded by partnering with the Italian state-backed FSI investment fund. “I am the bridge between my parents, who founded this company, and the third generation. I always knew that my goal was to leave this company alive and healthy for the children,” she said.

Her two grown-up daughters, Margherita and Teresa, are both working in the fashion industry. “So far, I feel helped, I feel supported,” says Angela of the new business structure. “Also, you know, we still own a majority stake.”

The family suffered a tragedy five years ago when Angela’s oldest brother Vittorio, marketing director for the company, was killed along with his wife and three friends in a plane crash off the coast of Venezuela. Angela and Vittorio’s father, Ottavio, died a few months later at the age of 92. “My father never wanted a big company,” said Angela. “He used to refuse orders when too many came in. He would say to my mother [Rosita], ‘Why take all this money and have no time to spend it? What is the point of a life that is only work?’ But we are in a different world now, and as a business, you don’t have the choice to stay small. Either you grow or you die.”

FSI spotted a business opportunity at Missoni, which has global brand recognition but remains a comparatively small business. In 2016 profits stood at €8m. “Our name is bigger than our company,” says Angela. “With investment, we can distribute more product, we can develop more menswear, more lifestyle.”

A Missoni cookbook of family recipes and photographs, published this summer, suggested a healthy appetite among consumers for Missoni as a lifestyle brand. “People think the cookbook was marketing, but it was a personal project for my son Francesco. There is a long tradition of food in our family. Some of us have passion for cooking – and all of us have passion for eating and for being together. There is no fashion in the book, just food and our life together, and it has shown me the affection of people for us as a family. On Instagram, someone wrote that they wanted the Missonis to adopt them! I thought that was so touching.”

“My parents did something very rare, which is that they actually invented a style” is how Angela explained the enduring appeal of Missoni. The label was a mood, she said, as much as a look, and “I guess it stands for freedom”. Since she took over artistic direction she has worked free of what she once referred to as “the zigzag cage” in which Rosita, who conceived the Missoni style, eventually found herself stuck.

The iced coffee fuelling the pre-show frenzy at the Missoni headquarters on Saturday was being served in jewel-toned goblets, in keeping with the colourful history of the house, but for the anniversary collection Angela “went looking for neutral colours that weren’t beige”, taking inspiration from vintage fabrics she photographed on a visit to Peru earlier this year. She has put together a soft blend of sand, pale blue, pearly white and dusky pink for the catwalk.

“Sometimes I do something and people tell me that it’s not Missoni enough,” she said. “But I know what Missoni is and was and can be, and I know that being courageous enough to explore is part of it.”