From rucksacks to despatch boxes, Birkin bags to Louis Vuitton luggage, Bags: Inside Out exhibition at V&A in London will explore the style, function, design and craftsmanship of the ultimate accessory. 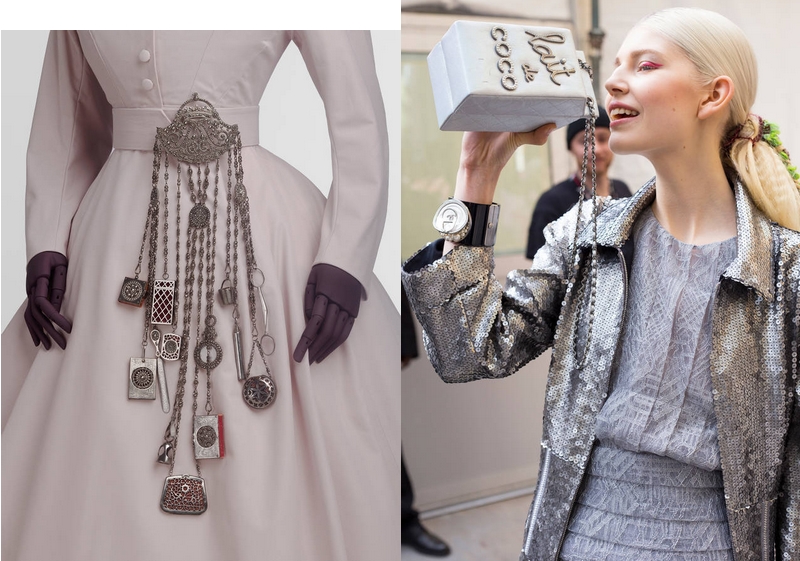 This article titled “Inside story: handbags that made history” was written by Emma Cook, for The Observer on Saturday 7th March 2020 15.00 UTC

I am running along the river, earbuds in, lungs burning, heart racing. No birdsong, thank you very much. Only curated noise and introspection. Then I see her. A woman walking towards me, her dog a little way ahead. We smile, briefly, and as we cross one another she pauses for a moment. I do, too, my eyes caught. The way it dangles from her shoulder, the double gold chain glinting in the sunlight. It is exactly like the one I have at home and yet… so not. Reflexively she flicks her bag back and it grazes her hip. I slow to a walk to get a better look. This version is newer and smaller. So much smaller than mine. It is shinier, too, infinitely covetable. Undeniably superior in every way. It speaks of lightness, of newfound freedom, of being out in the morning sunshine with few possessions (I calculate there’s no room in there for more than an iPhone and keys) except, of course, the possession itself. In comparison, my older and bigger version is grounded at home, bloated, out of time, a lumbering dinosaur. Old bag.

How could I have got it so wrong? I speed up again, start to run in sync with my shuffle, but the moment has gone. The dark pull of material desire has intruded again. I try to switch off, but it is difficult not to notice. A tote here. A micro bag there. A crossbody bag everywhere. Handbag envy. Often it is admiration, sometimes, if I’m honest, there is pity. Michael Kors, Kurt Geiger. Really? But how swiftly admiration turns to envy when there is flawless gold hardware involved. Can I really be this shallow? Do I even need to ask? Lusting after something like this makes you a fool. An unfeminist fool.

Last week in a toy shop with my eight-year-old daughter I saw a “My First Handbag for two-year-olds and up”. The packaging proclaimed, “Little ones will love taking this pretty pink handbag on a shopping trip and pretending to be just like Mum! Take a peek in the mirror and chat on the phone. Playing pretend will boost your child’s imagination and encourage them to talk and learn new words.” Like: “Mummy, buy me a Gucci!” But obsession is never this simple. I suspect my interest in handbags was more a small act of rebellion than social conditioning, a reaction against my mother’s infinitely sensible handbag choices: natural leather, functional, unembellished. Her modest choice of accessory was far more successful in fuelling my false need than any marketing campaign.

But it took until my 50th birthday to really follow through and invest in the Only One. It is blingtastic. Italian. Intimate blush suede concealed beneath tooled black leather and, oh, the inimitable clunk of an expensive gold clasp as it snaps open and shut. Je ne regrette rien.

I may look and yearn but, when I commit, it’s for life. It has to be for the price I paid. My husband is still appalled; it will always be a purchase that baffles him. He likes to remind me that my bag cost more than his beloved bike (surely the Gucci of bikes, with a custom-steel Italian Dedacciai frame, he tells me) that gets him to work each day – as if this is a clear win in the battle for most functional possession.

I explain, slowly and patiently, that mine is not just a thing of beauty, but a practical form of transportation, too, for my possessions; my way of navigating the world and getting what matters most to me from A to B.

You see, to truly appreciate a handbag, you have to look beyond its surface, challenging though this can be, to what’s inside and how that shapes and defines you.

It is reassuring to see that the argument I hone for my husband is now the focus of a V&A exhibition next month. Bags: Inside Out, from Margaret Thatcher’s Asprey to Carrie Bradshaw’s Fendi, will look at what we have chosen to carry with us down the centuries. “We normally see bags when they’re closed, but I want to see the insides,” says exhibition curator Dr Lucia Savi. While much attention is paid to the exterior – its design, status and, inevitably, its price tag, less scrutiny is paid to this rich and complex internal life and the tension between the two. “It’s only when you leave home that you decide what is important to you – those things you choose to carry with you define you,” she says.

When a woman stepped out in the 1740s, her private belongings would have included a watch, a snuff box, money, jewellery and perhaps some food, according to Savi. These are what she chose to take from her domestic sphere into the world thanks to detachable pockets that were tied around the waist, accessible through openings in the seams of petticoats.

By 1863, she may have included scissors, a purse, a thimble, a miniature notebook and a magnifying glass. These she would have worn in the form of a chatelaine: a series of small purses that were suspended from the waist and highly visible. “It was symbolic of status,” says Savi. “Along with that there were reports of pickpockets who would cut the ribbons and steal them. It’s the first signs we see of the attention paid to women carrying belongings.”

“The content is so crucial,” says Savi. “As bank notes came in, handbags had to be compatible, at least bigger than a £5 note.” Now we carry cards, it is the phone that dictates design. “No one will create a bag that doesn’t fit the largest phone on the market.” Hard currency has shaped bags more than any other single possession, epitomised in 2018 by the appearance of the micro bag. There was no more potent symbol of a cashless society than the shrinking bag, although Savi is unconvinced by this connection. “It’s nothing new. The frog purse, dating back to the 1600s and intricately made in silk and glass beads, is the same size as your hand. It’s really the micro bag of today.”

More surprising, she says, is how the most ordinary of bags can communicate something about us. “It’s a blank canvas that can tell us all sorts of things: your status, your beliefs.” One of her favourite pieces on show is an “anti-slavery reticule” produced in 1825 by the Female Society for Birmingham. It is white silk with an image of a black woman breastfeeding while still a slave – displayed on a bag it was a powerful and very public way for a woman to convey her political beliefs at that time. “That tells you so much; how women were proclaiming their beliefs and it carries on with examples like Anya Hindmarch’s I Am Not A Plastic Bag.”

Savi is keen that the exhibition embraces bags in all their glory, not just the female handbag. Which is why Churchill’s despatch box is on show, as well as other bags used by men. Baggage began with men, says Savi, and was mainly for the train. “Louis Vuitton started with luxury travel, transferring their leather-making skills from horses to trains and then aeroplanes. Hermès started with saddlery and they still use those techniques in their stitching.”

Now we’re going full circle. According to Mintel, a quarter of men aged 16-24 buy manbags. But even if the manbag achieves parity, it is difficult to imagine it will be quite as iconic, as rich in metaphor, as its female equivalent. Will the tension between public and private space, that Savi explores, ever apply to men in quite the same way?

As Dr Alison Bancroft, fashion theorist and author of Fashion and Psychoanalysis, says: “The very fact that we have to prefix it with ‘man’ means it’s not the same. It is something different.” She tells me how a male friend of hers recently asked for a paracetamol and when she told him it was in her handbag, he wouldn’t look inside. “Instead he brought the whole bag to me. The handbag is about a degree of intimacy not everyone feels comfortable with.”

A handbag can establish boundaries and respect, but the flip side is less savoury. Bancroft recalls seeing the aftermath of a mugging in her local park and the remnants of an emptied handbag on the path. “That’s when you see it as a real violation, an act of violence against a person.”

I think back to the fleeting, primal panic, when my brain calibrates an absence, a lack of weight in what I’m carrying – I have left my handbag somewhere. In those moments I feel unmoored, as if I have lost part of myself. As Bancroft says: “How many times have you heard a woman say, ‘It is part of me. My life is in there?’” Maybe that is too much power to invest in a single object. Wouldn’t we feel freer relying on pockets, or just carrying less? But then Savi tells me about another highlight in the exhibition – a beautiful, battered Louis Vuitton trunk from the 1900s that belonged to Emilie Busbey Grigsby, an American socialite. Her trunk was a symbol of freedom, covered in travel labels of the places she, and it, had spent a lifetime visiting.

A bag can be whatever you want it to be. It can offer the promise of a sleek, well-ordered better version of yourself, a superior mini-you or, like Emilie, a wonderful souvenir of your travels. As my friend, who never knowingly underpacks, says: “A bag isn’t a burden but rather a ticket to ride.”