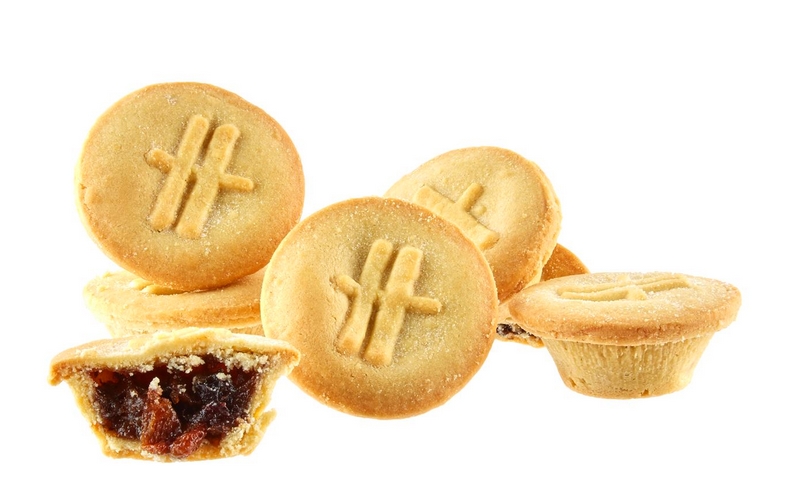 This article titled “How to eat: mince pies” was written by Tony Naylor, for theguardian.com on Friday 7th December 2018 13.22 UTC

In 1733, the Gentleman’s Magazine carried a short reflection on mince pies – née Christmas pyes – that, among other observations, noted how puritanical Quakers swerved them on the basis that they are an “invention of the Scarlet Whore of Babylon, an Hodge-Podge of Superstition, Popery, the Devil and all his Works”.

Sounds exciting, right? But, in 2018, the mince pie, subject of this month’s seasonal How to Eat (HTE), lacks that transgressive edge. We may buy a staggering 370m every Christmas but we also throw a shameful 74m away, indicative of how innocuous they now are. Any tingle of forgive-me-father-for-I-have-wolfed-four excitement has gone. Mince pies are mundane. We take them for granted.

Part of the problem is that most shop-bought mince pies are clumsily spiced, collapsing air-pockets of disappointment. But this is a treat of diminishing returns for other reasons, too. We routinely abuse the mince pie. We fail to treat it with reverence. Which is where HTE – the series identifying how best to eat Britain’s favourite dishes – can help. Merry Christmas!

As regular readers know, HTE is less a food column and more an examination of the misfiring engine in the once luxury saloon that is late capitalism. This supposed purring motor of perennial growth is now an old banger running on empty. Endless novelty is its only method of distracting us from its rusty, clanking malfunctions and the smoke belching from its exhaust. Nowhere is this truer than in mince pies. A 13th-century invention, their ideal form was established hundreds of years ago, but supermarkets must endlessly reinvent them in order to part a jaded, gullible public from its hard-earned.

Iced pies, sloe gin-spiked pies, chocolate chip and/or orange and cherry pies, crumble- or hazelnut-topped pies, plum, cinnamon and ginger pies, cranberry-mined pies: this is but a fragment of the long list of “mince pies” clearly created in an attempt to sell mince pies to people who do not like mince pies – spawning myriad culinary disasters in the process. Likewise, from brownies to baklava, magazine recipe writers redeploy mincemeat in endlessly ludicrous ways to offer us a twist on this classic. To paraphrase that great Salfordian sage, Shaun Ryder, it is twisting HTE’s melons, man.

Repeated attempts to doughnut-ify or deep-fry the pie are also unnecessary, once we think past our drooling Pavlovian response to the words “deep fry”. In terms of foodie affectation, such splashy attempts to reinvent this wheel are topped only by those poseurs who insist you should be putting real meat in your mincemeat. These nose-to-tail outliers talk enthusiastically of blurring the distinction between sweet and savoury, a concept as reckless as crossing the streams in Ghostbusters.

Even the supposed shortcrust versus puff pastry debate is overhyped, given that all reasonable people know that (unsweetened) shortcrust pastry is the correct casing.

HTE tries to maintain a relaxed attitude to cooking and baking your own … anything. It is not always possible or preferable. But when the chef Jeremy Lee told the Independent in 2011 that commercial mince pies are “generally unspeakable”, he had a point. A point reinforced by this year’s Which? survey of Christmas foods, which found that, while there are diamonds in the rough (Asda’s Extra Special mince pies took its top spot), the general standard of pies is on the slide. The cost of butter and dried fruit is rising and manufacturers are increasingly stingy with these star ingredients. If you haven’t already been seduced by Iceland’s unlikely palm-free hook-up with Selfridges, home-baking your mince pies is a wise move. Go easy on those spices, though. A mince pie should not smell like the perfume counter in Boots.

If you cannot heat your mince pie, it is better not to eat it. HTE is so adamant on this point that, for once, it will even license use of the microwave. It will heat your pie to thermonuclear temperatures, requiring ninja-like self-discipline as you allow it to cool to edible over three hours (timings approximate, individual appliances will vary). But at least you will not have to eat a cold, stodgy puck of a pie, its pastry dry and brittle, its filling claggy, its aromas and flavours as faint as the chances of Theresa May’s Brexit deal passing in parliament.

Heat transforms even the most half-arsed mince pie: butter and fats melt, pectin softens, scents are liberated. The whole thing takes on an almost supernatural lightness, as if the mince pie has been borne aloft by the oven’s hot draughts.

Like Kendrick Lamar or Scott Walker, a great mince pie speaks for itself. It stands alone. It does not need any embellishment, no backing band, no guest verses on big pop hits. But there are a lot of middling mince pies out there, which can get monotonous over Christmas, and which need a little lubrication or, for the sake of variety, an added inflection of flavour. But tread carefully.

Single or double cream Either will grease the wheels, so to speak.

Custard There is something magical about the contrast between hot mince pie and cold cream on the same plate. Custard, however, particularly in the first phases of Christmas, before gout sets in, can take the mince pie in an altogether gutsier, stickier, self-indulgent direction.

Squirty cream “It’s better than nothing,” says your mum. She is wrong. This artificial abomination ruins anything it comes into contact with.

Rum or brandy butter The only time alcohol works in food is when that alcohol is first cooked off, modulating the drink’s flavour. Raw alcohol is an aggressive, incoherent presence in any dessert, and particularly in the thick, creamy context of rum and brandy butters (top-shelf concoctions often made with rock-bottom brands), it creates a truly nauseating mouthful.

Ice-cream Sounds good, in theory, but unlike cream (which we instinctively add judiciously), you will always add too much ice-cream until the whole thing becomes too sickly and too filling.

Natural yoghurt It’s Christmas. Treat yourself. Keep this all-too-tart interloper away from your mince pies.

Clotted cream Cream at its most extreme and proof that you really can have too much of a good thing.

Blue cheese A slice of stilton with HTE’s mince pie, you say? Clearly this is something made up by mischievous internet trolls to fool innocent readers into trying it. It will ruin mince pies for you, for ever.

The mince pie is the season’s emergency snack standby, frequently served ad hoc as friends, neighbours and relatives drop in. According to that hilarious satirical comedy creation and/or renowned etiquette expert “William Hanson” (trigger warning: links to the Daily Mail), each guest should be given a napkin to catch their crumbs because, of course, nothing says: “Relax, make yourself at home,” like someone passive-aggressively warning you not to drop any mince pie on their carpet. If you are that uptight, hand plates around. Better still, go with the traditional serve, where everyone eats their mince pies with the little foil cup perched under their chin (useful to catch any major pieces of debris, but not too prissy), and then put the Hoover round later. What are a few crumbs between mates?

Such informality is an alien concept to Hanson. For instance, rather than decline a second mince pie, he advises you take it home in a napkin so as not to offend your host. Should you come across anyone that easily offended, the better course of action is to decline that pie, bite that bullet and expunge that person from your social circle. They clearly have issues that it would take a lifetime of expensive therapy to unpack.

Hanson further advises you should always eat a mince pie in your left hand. Not due to some ancient chivalric knights’ code (something about always being ready to defend yourself against killer ravens or dragons, HTE is imagining), but so that you can still shake hands with people. Key HTE tip: do not linger where people would expect you to prioritise polite mingling over a eating a pie.

Of course, if serving your pie with cream you will require a side plate and a fork. A greater volume of liquid (eg custard) needs a bowl and a spoon. Do not try to cup it in your hands. That way madness lies.

When unexpected visitors drop in (the horror!). In those moments of mid-afternoon peckishness between Christmas and new year, when your daily calorific intake has plateaued at a steady 6,000. As consolation when you arrive home from work at any point in December, wet, cold and thoroughly miserable, in desperate need of a little bump of sugar and self-care. On that blessed day, when – having spent the last week being dragged around Britain, including three days of high psycho-emotional tension at the in-laws – you can slump down on your own sofa and actually start to enjoy Christmas. The only bad news? You are back in work tomorrow.

Champagne and mince pies is instant heartburn; sherry and mince pies is too saccharine; but good brandy is a fine foil for all that rich fruit and spice. Is alcohol really necessary, though? There is something about a good mug of strong tea, its tannins cleaning your mouth like a stiff-bristled brush on a patio, that – particularly when you are on a three- or four-pie bender – is the most effective way of resetting your palate for the next assault.

So, mince pies, how do you eat yours?