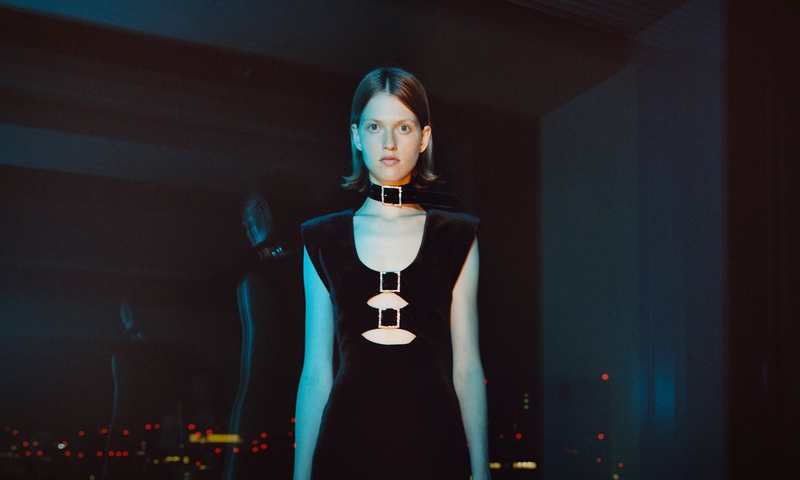 This article titled “How to dress for Christmas 2018: hope, loveheart earrings and the perfect winter skirt length” was written by Jess Cartner-Morley, for The Guardian on Tuesday 20th November 2018 17.36 UTC

‘Tis the season to be jolly. This is literally the whole point of Christmas. OK, not literally – but pretty much, since in this chapter of late capitalism the tale of Bethlehem effectively functions as the backstory to Elf and outdoor skating rinks. The point of Christmas is merriment, togetherness, gratitude and hope. And the point of party season is to get the festivities started as soon as possible, via the squad’s Secret Santa and annual drinks tradition.

This is why a Christmas party requires extra-special dressing-up – because a Christmas night out with your friends is the equivalent of a Valentine’s date for your group chat. You are gathered here tonight, in this freezing pop-up gin bar on a Thursday, to honour the bonds of friendship by renewing your vows of love for each other. (And yes, in this scenario, drunkenly totally counts.) Even if two out of six of you bail on the day with flu, and you decide at the last minute to relocate to the pub – because have you seen the cocktail prices? And Christmas is so expensive as it is – they still matter. In sickness and in health, for richer for poorer, right?

But looking hot is never the whole story of party dressing, and certainly not at Christmas. When, in years to come, you are looking back on the memories you most treasure, you are not going to be reminiscing about your arm definition. The point is to bring the vibe. A great Christmas-party look makes getting ready fun, puts you in a good mood, adds interest and/or glamour to every room you walk into, and doesn’t otherwise cross your mind again until you take it off.

Each Christmas has a particular mood. Some years are all about novelty jumpers and Pie-Face games. At the beginning of this decade, Christmas was urban and minimalist, all twig trees and brown-paper wrapping, until hygge came along and suddenly it wasn’t Christmas unless you were curled up on a sheepskin throw with a pottery mug of cinnamon-scented hot chocolate. This time last year, the mood was set by Melania Trump’s bleak decor scheme: a Blair Witch Project combination of spiky trees and harsh uplighting. But Christmas 2018 calls for wilful, full-bodied optimism and reaching for the positives, such as the Michelle Obama book and another summertime football tournament – the Nations League finals in Portugal next June. (The last one was fun, right? Could the heatwave-and-Harry Kane summer of love be repeated?)

Christmas is the most hopeful, the most wonderful time of the year. And the fun starts with dressing up.

Four looks for this year’s parties

Joy is the new protest

Dior’s We Should All Be Feminists T-shirts made eye-catching slogans a high-fashion statement – and this Christmas, joy is the new woke. Top of my list is Christopher Kane’s More Joy slogan T-shirt. (It’s £175, but I think I have been good.) The font is from the iconic 1972 book The Joy of Sex, which Kane took as inspiration for his autumn/winter collection, and the statement, taken literally, is super on-trend for the new age of sex-positive feminism. As Kane says, “it’s become my daily mantra. Don’t we all need a little more joy in our lives?”

I love how its fierce optimism feels almost surreal against a backdrop of what can seem like endless bad news – like Santa dropping down a suburban chimney. Wear with J Crew Highest-Rise Toothpick jeans with button fly, £125, and you have a party-worthy jeans-and-T-shirt.

You may know that Alessandra Rich is the designer behind the polka-dot contender for dress of the year recently worn by the Duchess of Cambridge, but what you really need to know about her is that she is the queen of earrings. The outsize heart-shaped dangler is the new tassel (which was the new chandelier – do keep up) and it all started on her Paris catwalk. The real thing comes in triple-drop crystal this season, but the trend has hit the high street in a major way. H&M has pleasingly enormous faux pearl beauties for £9.99, while Zara has golden ones in beaten-metal. At this most optimistic time of year, wear your heart on your lobe.

We all still love a midi-length skirt. In fact, that’s exactly the problem. Sometimes it seems as if eight out of 10 women wear that just-below-the-knee length every day, meaning it feels like a less daringly elegant eveningwear option than it did when everyone else was still in knee length. Floorlength, however, is still a bit more ‘charity ball’ than is appropriate for most of our social lives.

The midaxi, as showcased at Maria Grazia Chiuri’s recent dance-inspired Christian Dior show at Paris fashion week, hovers a couple of inches above the ankle with a ballerina-ish elegance and an easy, fluid line. (It is also, handily, the length that most designer skirts are on an average height woman like me, since they are cut on the assumption that we are 5ft 10in.) The midaxi does away with the tights issue (really no need – if it’s not actually snowing, I’m not even discussing it) and makes shaving your legs irrelevant. It is especially good in a swanky fabric. Mango has a white sequin gown that is £149.99, but a real show-stopper. For £120, Boden has a navy sequin skirt that is more midaxi than midi, if you ask me, and looks excellent with a simple T-shirt or sweater.

There will always be a special place in my heart for a flimsy, completely impractical, all-out party dress. Always. But there is something about a teeny-tiny dress that right at this moment feels a teeny-tiny bit like you missed the memo of 2018, you know? Dressing up by getting as naked as possible is perhaps, right now, just a little gauche. Besides, my fellow weather app fanatics (hello, comrades) will know that the long-range forecast is for below-average temperatures in the coming weeks. Baby, it’s cold outside – so a dressed-up but covered-up option is practical. This year has been a stellar one for elegant options that take their cue from men’s black tie. Meghan Markle at Hamilton in a tuxedo dress; Cara Delevingne in a top hat and tails at Princess Eugenie’s wedding, and Claire Foy in a Stella McCartney tuxedo suit at the Golden Globes. The Ness dress by Ba&sh (our new favourite French haute-high-street import to join Maje and Sandro) is as cool as it is cosy. Which is just as Christmas should be.