Like so many other electronics (think smartphones, flat panel T.V.s & gaming) Japan has been an early adopter of the bidet toilet seat as well.  According to the Cabinet Office of Japan, as of 2009, penetration of the bidet toilet seat in Japan was 72%.  This is comparable to personal computers at 75% and digital cameras at 72%.  Even tech novices in Japan are bidet toilet seat savvy.  Here in North America, penetration has begun to show a spark of the explosive growth that is possible.  In the United States alone, there are 220 million residential toilets.  A 1% penetration rate equates to a potential $1 billion market.  This would be the size of next year’s projected Social Gaming industry.  Think of Brondell as the next Zynga.  That’s what caught the imagination of founders Dave Samuel (co-founder of Freestyle Capital, Spinner.com and Crackle.com) and Scott Pinizzotto (former Product Engineer with Sony in Japan) as well as investor Mark Cuban (owner of the Dallas Mavericks, founder of Broadcast.com and consummate entrepreneur). 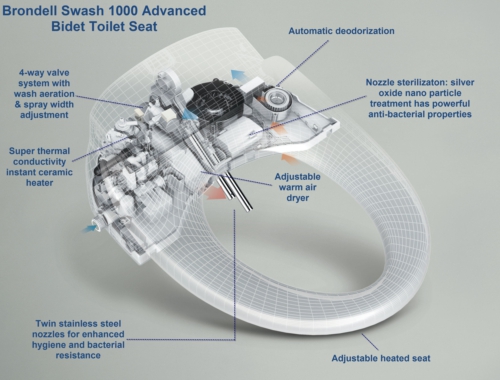 Based in San Francisco, California, Brondell is a privately held company that develops innovative, quality bathroom products. Brondell currently sells the Swash line of advanced bidet toilet seats, the Breeza line of deodorizing and heated seats, and the FreshSpa bidet toilet attachment. All products reflect Brondell’s commitment to quality design with an environmentally conscious focus. The company’s offerings deliver comfort and cleanliness to young and old alike, setting a new standard for luxury and personal hygiene in the bathroom.