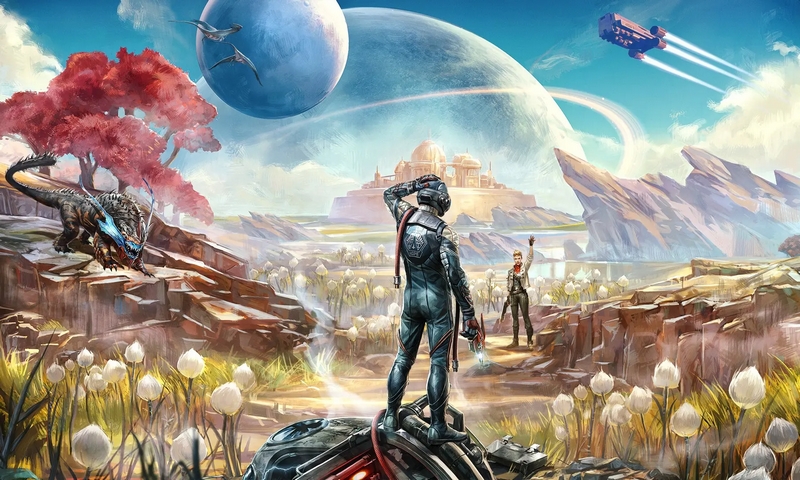 This article titled “From Cyberpunk 2077 to The Outer Worlds: are role-playing games getting too predictable?” was written by Alex Hern, for theguardian.com on Tuesday 20th August 2019 08.30 UTC

It might be set in space rather than on an Earth ravaged by nuclear war, but there is a strong argument that The Outer Worlds, a forthcoming first-person role-playing game (RPG) by storied developers Obsidian, is spiritually a Fallout game. Not only is it directed by Fallout creators Tim Cain and Leonard Boyarsky, it shares a lot of DNA with Obsidian’s Fallout: New Vegas – a spin-off with a reputation as the best in the series. New Vegas earned particular praise for its dialogue, and a world-building background that makes it feel like more than a thin justification for firing mini-nukes at super-mutants.

New Vegas was Obsidian’s first and last game set in the Fallout universe, but The Outer Worlds places similar importance on freedom of choice in dialogue and gameplay. In this world, where mega corporations are starting to take over alien planets, you can act like a hero, an opportunistic mercenary, or a total idiot. The writing is sharp, snappy and funny, the world exciting and vibrant, and there’s a classic New Vegas interplay between factions of characters, any of whom the player can help or hinder.

The genre of choice-based, do-what-you-like narrative game that The Outer Worlds inhabits – sometimes called “immersive sims” – is one I love. But it has ossified so much that a 2019 game can build on the legacy of one from 2010 without needing to change much.

This year’s E3 games expo was a stark reminder of how formulaic games in this mould have become. Showing off The Outer Worlds for the first time, Obsidian had the player arriving on a new planet and heading off obediently to infiltrate a facility on the ask of a quest-giver. Depending on whether the player’s character is created for intelligence, stealth, strength or whatever else, they can go in guns blazing; sneak around without being noticed; or use a combination of charm, intimidation, persuasion and hacking to waltz in as if they own the place. But on meeting the head of the facility, there’s a twist: they offer to double your fee if you go back and kill the person who sent you.

Related: E3 2019: the future of video games is complicated

When I went to see the near-future action-RPG Cyberpunk 2077, Polish developer CD Projekt showed the player arriving in a new part of the game world, heading off to meet a quest-giver and being told to infiltrate a facility. You can take three broad approaches, we’re told: go in guns blazing; sneak around; or chat your way inside. But once again, on meeting the head of the facility, they offer to double the fee if you go back and kill the person who sent you there in the first place.

In tone and style, Cyberpunk 2077 and The Outer Worlds are different: one is a gritty, violent, urban affair, the other colourful sci-fi. But the fundamental skeleton the games are built on is so constricting that, given an hour to show off everything they could be, both developers independently converged on a near-identical script.

Genre conventions like this have their advantages. Film has embraced the three-act structure for years; pop songs have settled on a rhythm of verse-chorus-verse-chorus-bridge-chorus. They provide creators with structure and familiarity on top of which innovation can occur without fear of alienating audiences.

But every now and again, a game comes along which shows that innovation can happen without putting people off and revives a genre in the process. The Ubisoft model was once to open-world games what the Fallout model is to first-person RPGs. The blueprint: climb towers to unlock new areas, sprinkle a map with icons representing mini goals to reach, make progress at your leisure. It underpinned Ubisoft’s Assassins Creed, Far Cry and Watch Dogs series, Warner Bros’ Batman and Middle Earth franchises, and many others.

Then came The Legend of Zelda: Breath of the Wild, in 2017. It’s got the towers, the open-world, and the plethora of smaller activities to distract you from the main noble quest. But it quietly revolutionised that stale old structure. Nothing in Breath of the Wild is gated. If you wanted (and you were extremely skilled) you could simply walk to the final boss and finish the game, though you would be far more likely to be lasered to death by guardian robots on the way up to the castle. The icon-filled map is almost entirely gone: only fast-travel points and the occasional quest-line show up. The rest is there for you to discover with your eyes and ears, rather than following objective markers like an orienteering enthusiast.

I’m looking forward to The Outer Worlds and Cyberpunk 2077. But their genre needs its Breath of the Wild moment: an outsider to toss out the conventions, and build something beautiful from what is left. Surely choosing between shooting, stealthing or sweet talking can’t be the only options that the next generation of virtual worlds have to offer.