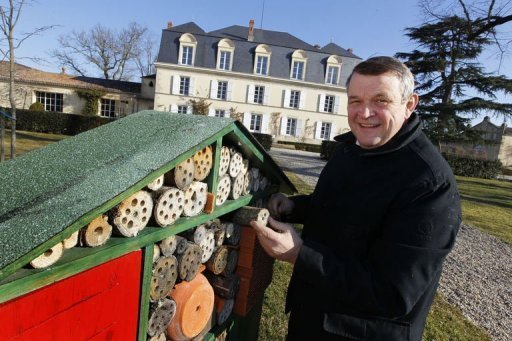 Chateau Guiraud 2011 will be the first of the region’s top Sauterne wines to carry the logo, some 15 years after one of its owners, Xavier Planty, first started to experiment with organic farming.

While Chateau Guiraud was the first organic Bordeaux “grand cru”, Chateau Fonroque, a Saint-Emilion “grand cru”, was first to win the organic label in 2006.

“Illnesses such as mildew (a mushroom which nearly wiped out French vineyards in the 19th century) are closely monitored, and with weather conditions known up to a week in advance treatment can be giving preventively,” he said.

The Aquitaine region, around the Garonne river, is today the France’s third largest region with organic vineyards, behind
Languedoc-Roussillon and Provences-Alpes-Cote-D’azur, respectively in southwest and southern France.

Aquitaine now has 300 organic-certified vineyards and 400 working their way to it, even though few of these include top wines.

“For us, it’s not marketing, it’s our philosophy. We want as many people as possible to follow suit,” said Caroline Blondeel, in
charge of customer relations at Chateau Fonroque.

Chateau Fonroque offers advice to all wine growers who want to try their hand at organic farming “not only to protect the environment, but to protect people who work in the vineyards”