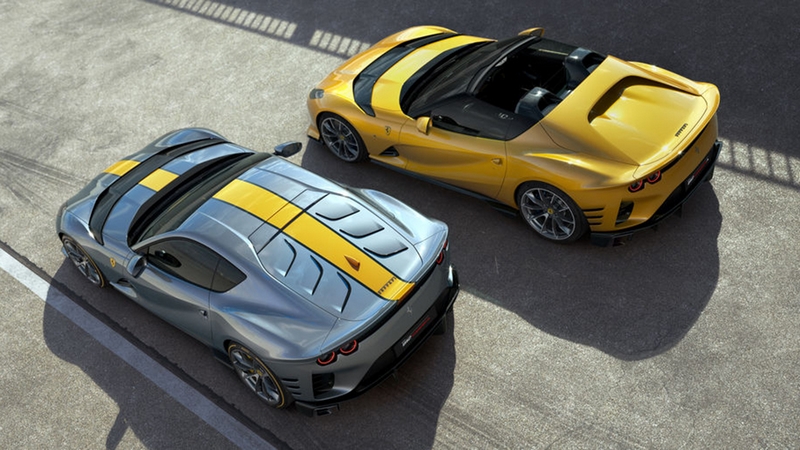 This duo of sports cars is dedicated to a very exclusive group of car collectors and enthusiasts.

The 812 Competizione, the new limited-edition special series car derived from Ferrari 812 Superfast, was presented this week to media, clients and fans all over the world. In the course of the event, which was broadcast live on Ferrari’s social media channels, the wraps were also whipped off the 812 Competizione A, a spectacular Targa-top version, again a limited-series and an homage to the Prancing Horse’s glorious open-top tradition.

The presentation took place in a very special venue, the recently-opened GT Sporting Activities Department located
alongside the Fiorano track, further strengthening the inextricable link between Maranello’s road-going sports cars
and the peerless racing DNA developed as a result of over seven decades of success on the world’s circuits.

The launch began with the 812 Competizione completing several laps of the circuit to give viewers a full appreciation of the car’s forms in this dynamic and high performance context in addition, of course, to hear the unmistakable sound of Ferrari’s iconic naturally-aspirated V12. After the hot laps Enrico Galliera, Ferrari’s Chief Marketing & Commercial Officer, officially presented the car and then unveiled the 812 Competizione A.

Ferrari isn’t revealing any pricing details for the time being and we’ll also have to wait to learn about how many
coupes and convertibles will be built, but expect an extremely high price and low production numbers, wrote
motor1.com. 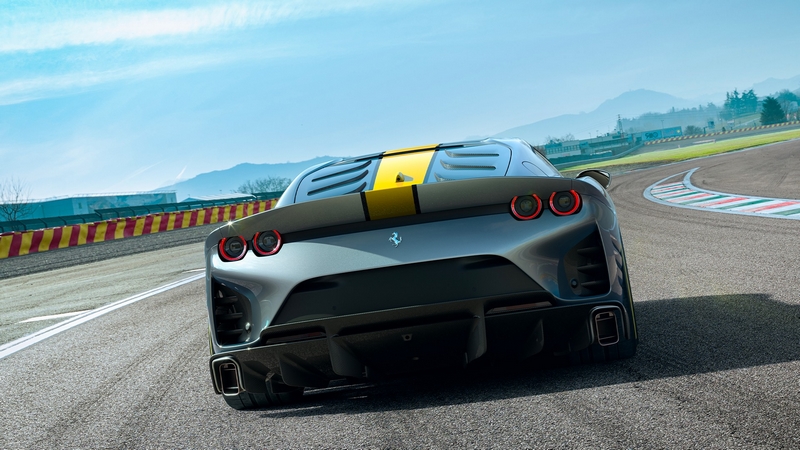 The most noticeable aspect of the 812 Competizione’s aesthetic is the replacement of the rear screen by an all-
aluminium surface. The vortex generators on the upper surface that boost the car’s aerodynamic efficiency
simultaneously create a backbone effect that underscores the car’s sculptural forms. Together with the carbon-fibre
blade that traverses the bonnet, this motif changes the overall perception of the car’s volume: the car seems more
compact than the 812 Superfast, accentuating its powerful, fastback look. Not having a rear screen also creates a
textural continuity between roof and spoiler, providing owners with the opportunity to personalise the car even more with a whole new single continuous graphic livery that runs unbroken its entire length. 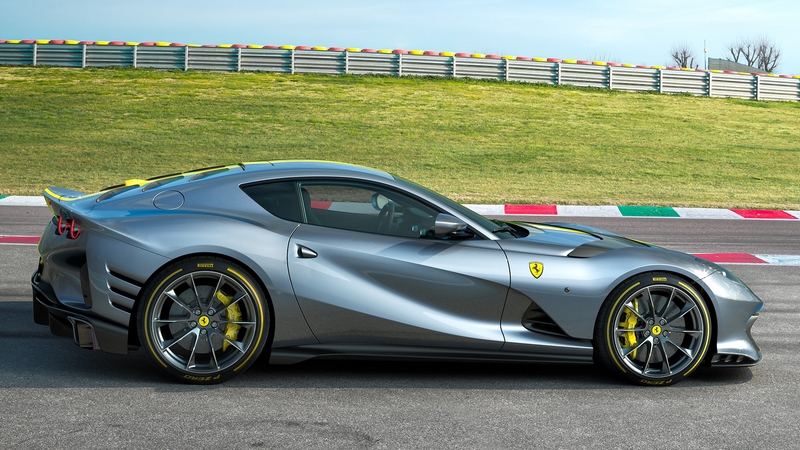 The result is a naturally-aspirated 830 cv engine that pairs impressive power with electrifying delivery and the inimitable soundtrack that Ferrari V12 purists know well. To boost the output of the engine, which has the same 6.5-litre displacement as the 812 Superfast’s V12, several areas have been significantly re-engineered to achieve a new record red line while optimising the fluid-dynamics of the intake system and combustion, and reducing internal friction.

The fact that the car is faster into corners demanded an improvement in braking power. Brake cooling is
fundamental to avoiding compromising on either downforce generation at the front of the car or on the weight of the
brakes themselves. Compared to the 812 Superfast, the brake cooling concept was completely redesigned around
the new front “Aero” calliper which debuted on the SF90 Stradale and which has an air intake integrated into its
casting.

Like on the 812 Superfast, the front diffuser is equipped with a passive mobile aero system which opens over 250
km/h. When the panel rotates it completely stalls the diffuser allowing the car to reach its maximum speed.

The 812 Competizione debuts many innovative components and contents, which have ensured it delivers on its
vehicle dynamics performance targets. Specifically, these include the first use of independent four-wheel steering,
the evolution of the Side Slip Control (SSC) system to version 7.0, and the development of the dedicated new
Michelin Cup2R tyres.

In terms of its interior architecture, the 812 Competizione has remained faithful to the 812 Superfast, retaining the same general parameters and main dash and door panel interfaces, including the latter’s signature “diapason”
motif. The door panel itself has been lightened overall both formally and in terms of actual weight to underscore the sportiness of the cockpit. 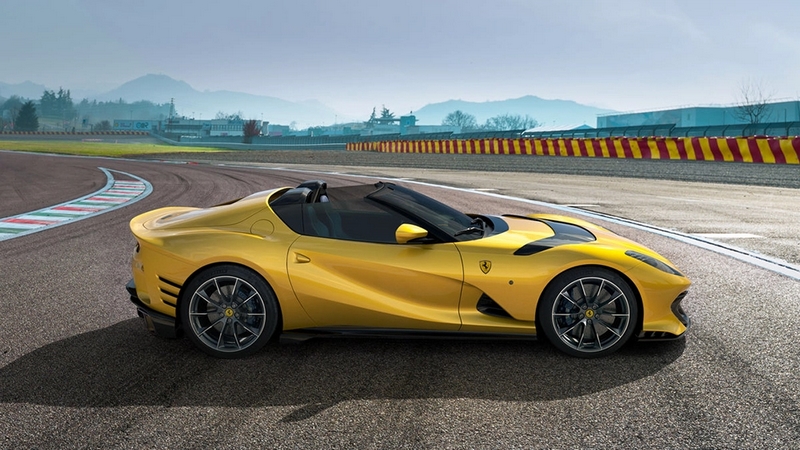 The 812 Competizione A provided the Ferrari Styling Centre with the opportunity to use the modifications required
for the rear of the car to create a truly unforgettable architecture. The flying buttress concept, which has long been a much-loved part of Ferrari tradition, harmonises effortlessly with the arrow theme of the front created by the blade and lends a sense of forward thrust to the car’s body, but also gives it a completely different connotation to the coupé.

The car’s centre of gravity appears lower, particularly when seen from the side, not only because of the roof and
wraparound windscreen that flows into the side windows, but also because the flying buttresses at the rear are lower than in the 812 Competizione. With the Targa top stowed, the roll bars partly jut out above the rest of the bodywork but because they are carbon-fibre, they become secondary visual elements and so do not compromise the broader, more squat stance created by the flying buttresses. This amplifies the visual lowering of the side view.

In the closed configuration, the roll bars connect perfectly with the roof structure forming a seamless unit. The targa top is made from carbon-fibre to create a sense of aesthetic continuity with the roll-bars. In the open-top
configuration, it is stowed in a compartment with the same design shape as the targa itself. Being able to stow the
top at any time means the car can be enjoyed to the full, whatever the weather. 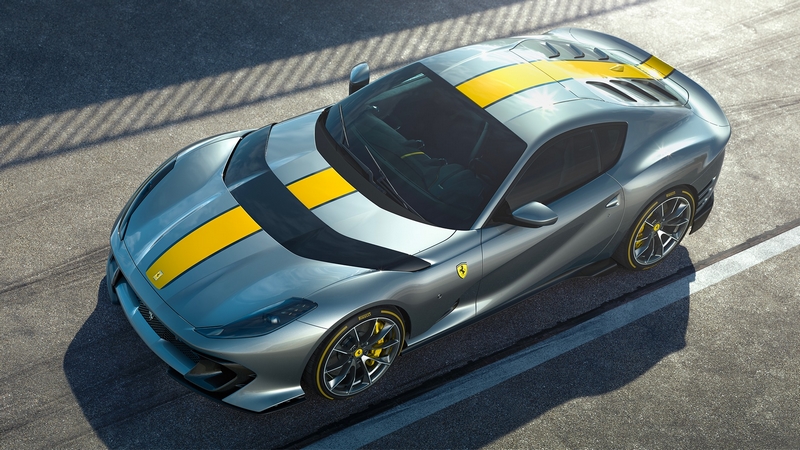 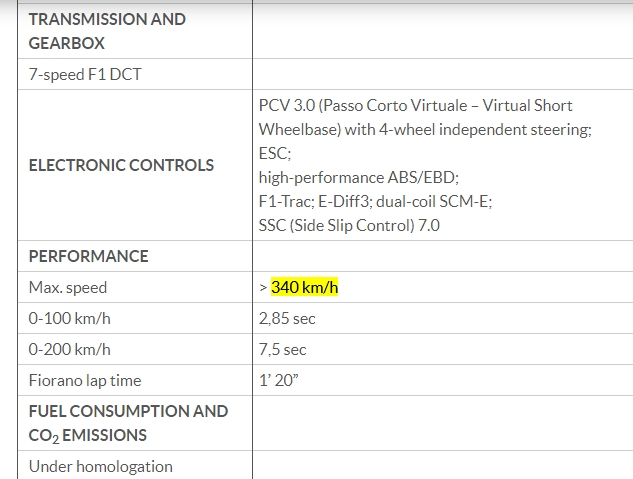 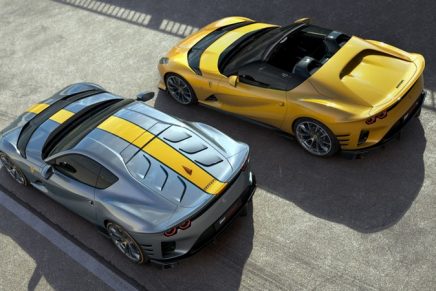 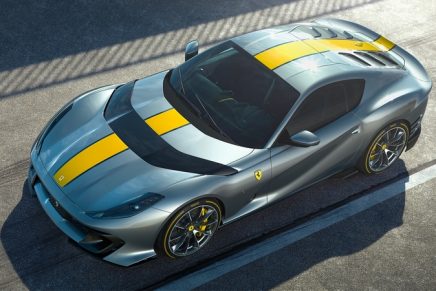 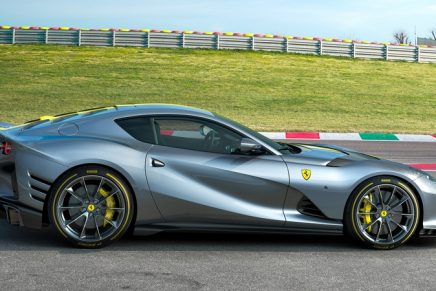 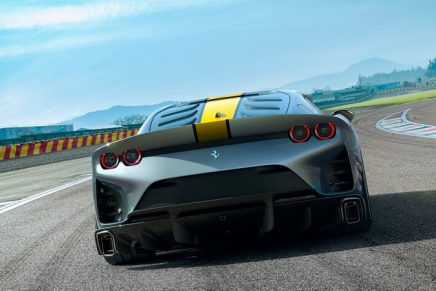 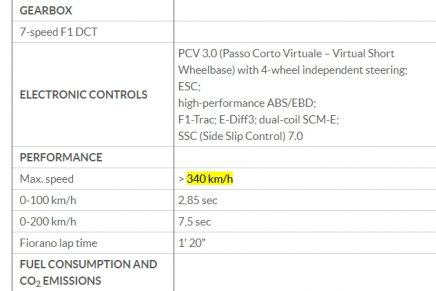 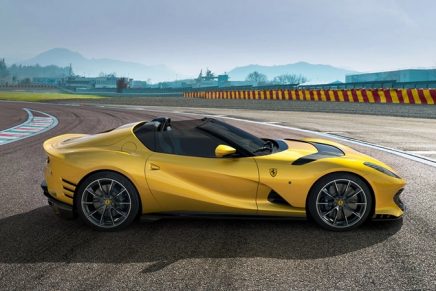