From Chanel backstage to a wintry setting — Chanel ambassadors and friends of the luxury French house were gathered at the Grand Palais in Paris to discover Chanel Fall-Winter 2019/20 collection by Karl Lagerfeld and Virginie Viard. 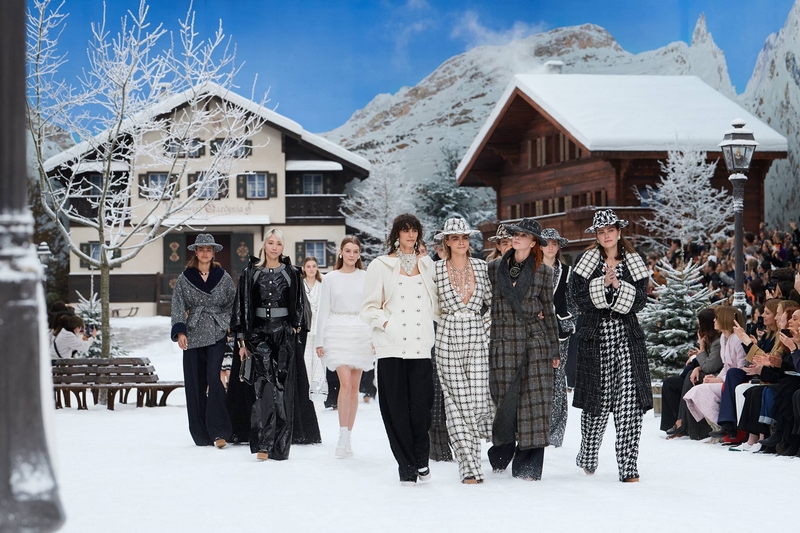 This article titled “Fashion bids farewell to Karl Lagerfeld at his final Chanel show” was written by Jess Cartner-Morley in Paris, for theguardian.com on Tuesday 5th March 2019 17.19 UTC

At Paris fashion week, there was only one show in town. Karl Lagerfeld’s final collection, designed shortly before his death last month, was both Chanel catwalk show and a moment at which the fashion world said goodbye to the designer.

There was a painted backdrop of bright blue sky inside the Grand Palais, transformed for this show into Tyrolean village of 12 Alpine chalets. As always with Lagerfeld’s Chanel shows, a set had been realised with movie-location precision. Each chalet had carved shutters, lace curtains and wooden balconies. Smoke drifted from chimneys, and powdery snow banked in drifts against the long rows of wooden benches, settling on the birch and pine trees dotted between.

The picture-perfect scene set a mood that was celebratory rather than mournful. Claudia Schiffer wore a cream blouse embroidered with camellias, the house flower; Anna Wintour a pale pink bouclé suit. Lagerfeld, who never liked to admit to feeling unwell – it was one of the many things he considered common – detested funerals. “I just want to disappear like the animals in the virgin forest. It is awful to encumber people with your remains,” he told French television four years ago.

On each of the 2,658 seats for this show was a gift of Chanel No 19 fragrance, a bottle of classic Rouge Noir nail polish, and a reproduction of Lagerfeld’s sketch of himself walking side by side with Coco Chanel, inscribed “The Beat Goes On”. The house of Chanel intends to hold a memorial event for Lagerfeld, although neither details nor date are known. Meanwhile, the message is that Karl may be gone, but Chanel lives on.

The show began with a minute of silence, brought to an end by a recording of Lagerfeld holding court on the art of the fashion show. The doors of Chalet Gardenia opened, and out strutted Cara Delevingne in wide windowpane-checked wool trousers with matching silk skirt and trilby, under a tweed houndstooth coat. The theme of the collection was chalet chic; the mood was the irrepressibly bumptious power-dressing that Lagerfeld perfected at Chanel in the 1980s and never strayed far from.

There were twinsets with Alpine-themed intarsia design, sheepskin moonboots, ski goggle sunglasses and sporty tweed jackets that zipped to the chin. For a finale, the actor Penelope Cruz, who has attended Chanel shows since 1999 and recently became an ambassador to the brand, wore a snowball dress with an 1980s-style puffball skirt of feather and chiffon, and carried a single white rose.

Lagerfeld brought to Chanel a run of prestige almost unheard of in fashion. All eyes in the fashion industry will now be focused on discovering whether this can be sustained without him. Virginie Viard, his right-hand woman in the studio, was swiftly handed responsibility for “the creative work of the collections”, but a more formal and detailed statement issued by Chanel last week named not one but two successors. Viard becomes artistic director of fashion collections, while Eric Pfrunder, longtime director of image, is artistic director of fashion image.

The appointments quell – for now, at least – the long running rumours that Lagerfeld’s successor would be an internationally famous name such as Phoebe Philo or Christopher Bailey. But the division of what had been Lagerfeld’s role is significant. Lagerfeld’s success at Chanel was as much about brand image as it was about the clothes themselves, so Pfrunder’s role is key, although Viard seems likely to take over as a front-of-house figurehead.

Viard began her career in fashion as a costume designer before joining Chanel in 1987 as an intern. She was promoted to head of embroidery and then to director of haute couture, and began working on ready to wear in 2000. Her role alongside Lagerfeld was to develop his sketches into samples, which would then be shown to him at fittings. “I try to please him, but I like to surprise him too,” she said in 2017.

Like Lagerfeld, she is known for a strong work ethic and for being a voracious reader. In last year’s Netflix documentary about a Chanel haute couture show, Lagerfeld described Viard as “the most important person, not only for me but also for the atelier, for everything. She is my right arm and even if I don’t see her, we are on the phone all the time.”