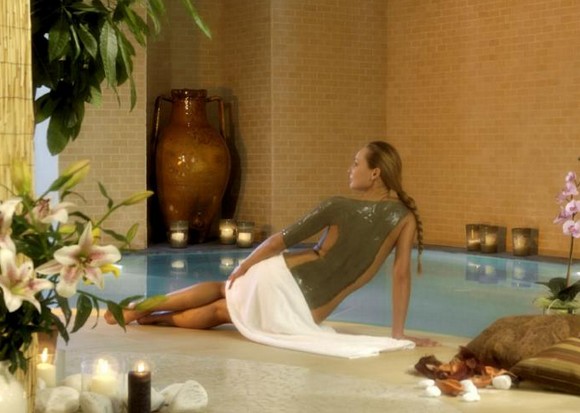 This article titled “Fangotherapy – a mud spa near Venice” was written by John Brunton, for The Guardian on Friday 20th July 2012 21.45 UTC

I always think of spas as something for an exotic Asian holiday – a relaxing Thai or Balinese massage or a zen Indian retreat – so the idea of a detox weekend wallowing in hot mud did not exactly grab me with excitement when we picked up the hire car in Venice and headed out to the ancient Roman spa towns of the Euganean Hills.

Abano and Montegrotto Terme nestle at the foot of rolling volcanic hills just outside the grand university town of Padua, less than an hour’s drive from Venice. I was warned by Venetian friends not to expect fashionable cosmetic mud treatments that are par for the course in any trendy spa, as the Euganean Hills are famed throughout Europe for the regenerative effects of their unique “fangotherapy”, mud and algae that are aged in special tanks for more than two months, bubbling away in thermal water that springs out of the earth at a scorching 87C.

This is popular with spa-fanatic Russian and German tourists, and Italians who can often get most of the treatments reimbursed by their equivalent of the NHS. I had been put off coming here before as the hotels used to push for a lengthy six- to 12-day full-board stay of intensive fangotherapy, but with the recession, I discovered now that most places – from luxury five-star to budget three-star – are ready to offer well-priced B&B short stays, perfect to see just what all the fuss is about.

So we are set for a long weekend to try out the dreaded fango, enjoy the fabulous pools, Jacuzzis, saunas and hydrotherapy, and drive around the surrounding Euganean countryside exploring renaissance abbeys and castles, Palladian-style villas and, if the detox gets too much, gourmet trattorias, rustic agriturismos and some excellent winemakers.

While Montegrotto and Abano are just a couple of kilometres apart, they are very different resorts. Abano has the bulk of luxury hotels, including the palatial Grand Hotel Terme Trieste & Victoria, which is celebrating its centenary this year. Much of the town is pedestrian-only and the pace of life can be a little sleepy. Montegrotto is closer to the Euganean Hills themselves, and we’re checking in at the Hotel Terme Apollo, a family-run three star.

The exterior may resemble 1970s Costa del Sol, as do most of the hotels here, but the surprise comes when Stefano Bernardi, the owner, shows us round the spectacular swimming pools and landscaped gardens that sit right at the edge of rolling hills covered with thick woodland. There are four huge pools in all, waterfall showers to relax head and shoulders, and amazing underwater tiled beds with jets that shoot up to hydromassage the back and legs. We walk through the grand dining room, and the guests staying here on half- or full-board are certainly not looking to lose weight, as both lunch and dinner run the full gamut of antipasti, pasta, hearty main course, dessert and even cheese!

Stefano explains that the spa towns of the Colli Euganei are different from many others in Europe as there is no central, municipal thermal centre. Instead, each hotel – and there are roughly 200 – has its own hot thermal spring and is responsible for preparing the fango itself, all under the supervision of the Italian health authorities. Regardless of how many stars it has, each hotel has similar facilities when it comes to the fango treatment.

Before trying out the magical mud, I have to make an appointment with the hotel’s resident doctor for a check-up, as certain heart and kidney problems mean you can’t have a full-body fango. Everything proceeds smoothly, though the medic crushes my illusions of wallowing in a mud bath, explaining that 20 minutes is pretty much the maximum anyone can stand being covered in 40C fango.

The treatment centre resembles an upmarket private clinic decorated with Roman columns and tropical palms. It turns out the mud treatments begin at four or five in the morning, with the last ones at 9.30am, which I’m booked for, and this early schedule is to ensure you experience the treatment before the digestive system kicks in after breakfast. The worker who prepares the fango tanks at the back of the hotel has already trundled in two large buckets of mud and plastered it down on the bed in a curtained-off compartment. And as I gingerly squelch myself on to it and lie back, the smiling fango lady, Giuliana, starts sculpting me with what feels like hot clay. Also, she keeps liberally spraying me with an “aromatherapy” that smells more like Glade, obviously to mask the pong of the fango. After I’m pretty much encased in mud, she starts wrapping me up in various blankets, with just my head sticking out and one single hand left free – something between an Egyptian mummy and a butterfly wrapped in its cocoon.

And so the minutes start ticking by. With beads of perspiration slowly trickling down my nose, it feels like a Chinese water torture until, miraculously, Giuliana pops her head round the door and comes in to dab me down. I’m unable to move my arms, fingers or feet. In fact, it is almost like being buried alive, and thoughts run through my head like, “What happens if there is a fire alarm?” and “This would have been a great scene for a James Bond movie with Jaws playing the role of the nurse.”

The other weird thing is that every so often there is a gurgling sound as the fango releases air like some fetid swamp, and after 20 minutes I’m really quite relieved when Giuliana tells me it is time to get hosed down and then slip into a warm Jacuzzi of bubbling, ozone-enriched thermal water. She hasn’t finished yet though, as she pats me down with a cloth, paints my body with a cooling menthol gel, and finally wraps me in a tight towel-toga, declaring, “Ecco Julius Caesar.”

Time to sit down for a while and relax over a cup of ginger tea before walking over to the massage room, where Signor Oscar proceeds to pummel me for the next 50 minutes. By the time I come out, there is hardly anyone around, as the staff have all started in the early hours of the morning and are already on their way home for a well-earned siesta.

At the end of our weekend stay, the effect of the fango is really quite something; a feeling of total, utter relaxation, and after a couple of hours each day in the pools and hydromassage, you can see why most of the regular guests head off each afternoon to their rooms, just reappearing in time for dinner. Maybe this is what a spa holiday should really be about – not hip or designer, not new age or holistic, just an old-fashioned terme, little-changed from Roman times.

• Accommodation provided by Hotel Terme Apollo (4 Via San Pio X, Montegrotto Terme, +39 049 891 1677, termeapollo.it), which has a special three-night B&B package for €186pp, including full use of pool and spa facilities but not fango, which is €25.50 a session. Fly to Venice Marco Polo or Treviso airports. For car hire, see carrentals.co.uk. For further details on visiting the Euganean spas, see turismotermeeuganee.it, consorziotermeeuganee.it, and abanomontegrottosi.it