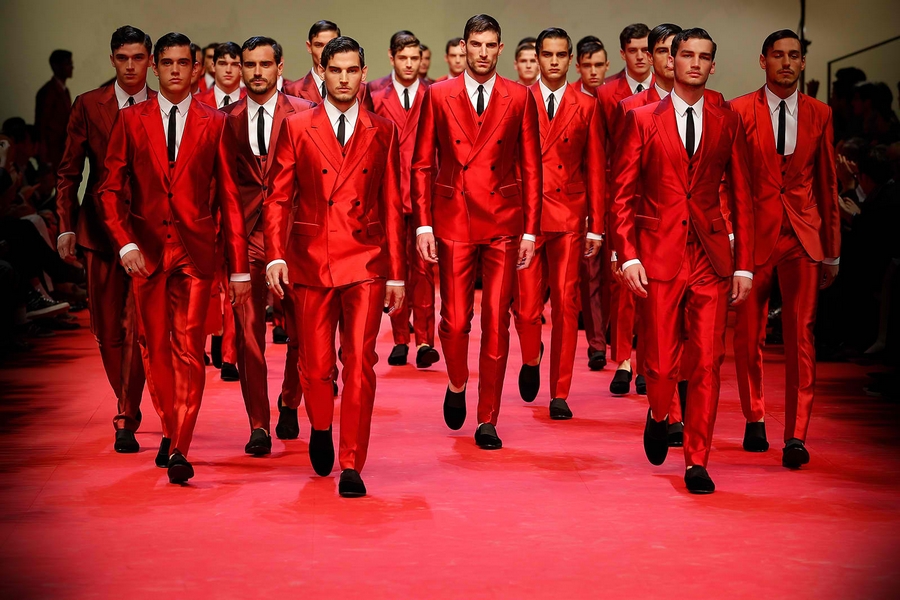 This article titled “Does wearing red really make you dominant, charismatic and sexy?” was written by Stuart Heritage, for The Guardian on Wednesday 13th May 2015 17.18 UTC

And this is exactly where I have been going wrong. A Royal Society journal has published a study where subjects were shown identical images of a man wearing different-coloured shirts. When they saw him in red, they claimed he looked more intimidating, aggressive and dominant than in any of the other images.

It doesn’t stop there. When athletes wear red, they gain a psychological edge over their competitors. When women wear red, they are suddenly seen as sexier. When Ed Miliband wears a red tie … actually, no, that’s a bad example.

Still, if you want to be seen as an aggressive, dominant and sexy, you need to wear red. As someone who realistically is none of those things, I took this study as an opportunity to go shopping.

Unfortunately, I live in a relatively small town and all the good places are quite a long way off. So I did my shopping at a charity shop, spending £8 on a too-small T-shirt and an ill-fitting cardigan that came up on the till as “Ladies knitwear”.

But the garments themselves didn’t matter. What mattered was the colour. People would see me hurtling towards them in a fiery blaze of red, and throw themselves at my feet. They would plead for forgiveness, or declare their undying love, or vow to dedicate the rest of their lives to fulfilling my every berserk whim.

So, naturally, my first stop was Caffè Nero. After all, big-chain coffee shops are known for their tendency to reward the attractive with free drinks and, dressed in my lovely cardie and never-worn freebie hat, I was the walking definition of attractive. A free drink was the least I should expect.

That is the lesson I’m taking from this. Sure, to the casual observer, it might have seemed as if I was being widely ignored by every single human being I saw, and that this study is a massive crock of crap. But I knew. I knew that I was simply dominating them to such an overwhelming extent that I caused them to in effect shut down. I was too charismatic and sexy, that was the problem. I was a weapon, and they didn’t stand a chance. Maybe I should wear less red from now on.