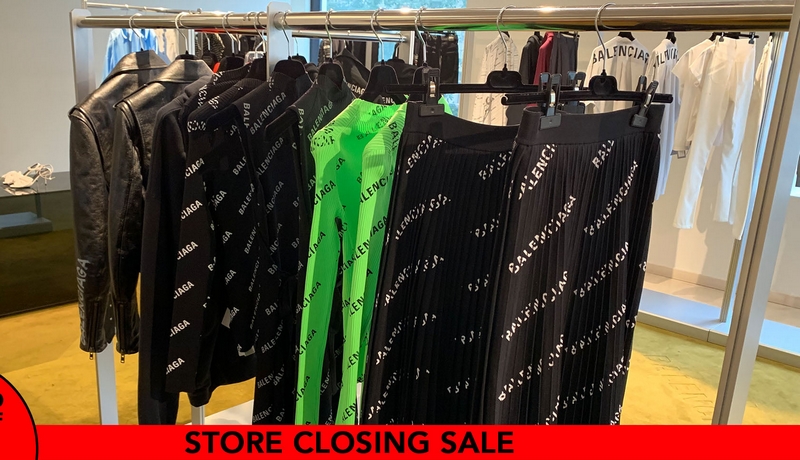 This article titled “‘Death of an icon’: the downfall of Barneys New York” was written by Edward Helmore in New York, for theguardian.com on Sunday 22nd December 2019 08.00 UTC

“EMS – Every Thing Must Be Sold,” read the signs plastered all over Barneys New York – an unprepossessing welcome to what was once New York’s premier fashion store as it enters its last days before closing after almost 100 years in business.

The red-and-yellow sale signage is certainly an affront to the luxury industry’s fastidious, and constantly refreshed, exercise in product desire. The 35% discounts on brands such as Prada and Bottega Veneta are rare to an industry that fiercely guards its exclusive aura.

But this is the sorry fate of Barneys, the Fifth Avenue department store that was once a supportive partner for new designers – introducing Americans to Armani, Azzedine Alaïa and Comme des Garçons among others – and the haunt of millions of credit card-wielding Sex and the City types, actual and wannabe, devoted to shopping as a purpose in its own right.

Luxury lives on. Bernard Arnault, the chief executive and owner of the French luxury conglomerate LVMH, recently snapped up Tiffany & Co for the relative bargain price of $16.7bn and paid himself $39bn, making him easily Europe’s wealthiest man.

According to the Altagamma Worldwide Luxury Market Monitor by Bain & Co, published last week, the global luxury market is expected to reach €1.26tn ($1.4trn) this year, up 8% on 2018, with shoes, mainly sneakers, and jewelry becoming the fastest-growing categories at 12% growth.

But signs of fracture have nonetheless appeared as the privileged rules of “old luxury” have been supplanted by more inclusive ideals of streetwear epitomized by brands such as Supreme and by Instagram influencers.

“There’s no center to fashion,” says stylist Tom Guinness. “The internet is unfocused and murky, brands are unmediated and direct-to-consumer, and stores, where they still exist, are for communication and messaging, not sales.”

In 1923, Barneys introduced its own kind of revolution when the founder, Barney Pressman, pawned his wife’s engagement ring and used the cash to open a 500 sq ft men’s discount clothing store on Seventh Avenue. His slogan? “No Bunk, No Junk, No Imitations.”

It was not until 1993 that the family contracted the celebrity architect Peter Marino to open the flagship on Madison. The timing was auspicious: endorsed by reigning supermodels – who also put their names to a nearby restaurant – the owners called in Barry White to perform at the opening party. New Yorkers arrived in droves, oversize black Barneys shopping bags like heraldic shields.

At its new height Barneys operated five flagship department stores across the US and half a dozen in Japan.

Many of those original customers were last week sifting through Barneys inventory of luxury brands appeared as graverobbers on an archaeological dig. Some said their friends were too downcast to visit, and few appeared to leave the store with much in the way of merch.

“It’s sad to witness the death of an icon,” said a visitor from Texas who, as if aware of the scavenger nature of his endeavor, offered his name only as George.

The slow-motion collapse of the retailer, once a pillar of the US fashion industry, is widely read as a sign that the former gatekeepers of the business are being turned out after a decade of upheaval.

New owner Authentic Brands Group, which completed a $271m deal to buy the retailer out of bankruptcy last month, plans to exploit Barneys’ name recognition in the Middle East and east Asia, but has yet to reveal what, if anything it has planned for the US home market apart from transforming its flagship store into a “a pop-up retail experience”.

“My clients are in a mourning period and don’t want to shop anywhere else,” said Joey Ruggiero, a 13-year Barneys employee and one of more than a thousand workers she described as a “family” now set to be laid off.

Ruggiero predicted that many would switch over to longtime Barneys rival Bergdorf Goodman. “As time goes on they’ll find a different sense of direction, but it will never be the same,” she added.

The cause of the store’s demise is straightforward – a massive 72% rent hike on its nine-floor Madison Avenue headquarters – and more subtle: the changing habits of consumers and a business model that required an excessive 275,000 sq ft of retail space, and the costs of maintaining a huge inventory of seasonal product from suppliers who often complained of late payment.

Regular Barneys visitor Monica S, checking out handbags, said many of her friends from the Sex and the City generation of New York women were refusing to come to the sell-off because they found it too sad. “They don’t want to see it this way; they want to remember the way it was,” she said. “It’s a sign of the times.”

As sad as Barneys’ closing is for her and her generation, she said the store’s failure to modernize was apparent. Online rival Net-a-Porter shows “the whole outfit on a model, and how to put the outfit together. Here, they just show you the thing they’re trying to sell,” she said.

Against a backdrop of national retailer pain – more than 9,200 store closings were announced this year, 59% higher than in 2018, according to the global marketing research firm Coresight Research – New York, the self described “shopping capital of the world” has been hit especially hard.

Along Madison Avenue north and south of Barneys, the vacancy rate increased 5.3% to 23.5% this year, causing the real estate website the Real Deal to announce “a retail vacancy epidemic” in the area it said is doing worse than in any other part of the city.

The loss reflects broader changes for brands struggling to keep up with a rapidly altering luxury market. If Barneys helped usher in the shopping as a cultural activity of the last quarter century, its collapse is a signal changes that have put the consumer back in control, with brutal results for the industry.

Despite the opportunity for customers to touch the merchandise, bricks-and-mortar stores created little opportunity to converse with customers, unlike Net-a-Porter, the RealReal, Farfetch and StockX, and have been brutally punished for that refusal to innovate.

As the Business of Fashion, in a review of a decade, noted: “Fashion’s gatekeepers – from brands to publications – can no longer afford to maintain a one-way conversation with their customers. Culture moved on, without their approval.”

The publication went on to warn: “The next Anna Wintour won’t be a single editor. It will be, and already is, the hundreds of thousands of people online, seeking and finding the products they want and the people that inspire them. Approval be damned.”

Brittany Locke from Virginia said she was a rare holdout for hands-on shopping while her friends, she said, buy 90% of their clothes online. “I like to go in stores, feel it, touch it, try it on,” Locke offered. But she conceded that the obvious disadvantages of online – no opportunity to check fit or seams, were outweighed by convenience and ease of returns.

But as the era of Barneys turns to dust, others are returning. Balmain, Celine, Christian Dior, Tom Ford, Delvaux, the Japanese streetwear fashion firm Bape and Balenciaga are all opening standalone stores nearby.

“This was the place to come, and it’s a shame its going, but these huge places don’t make sense,” said Cary Solidad, working her way through the accessories department. “Barneys was the place for the younger crowd, and [now] people don’t shop the same way.”