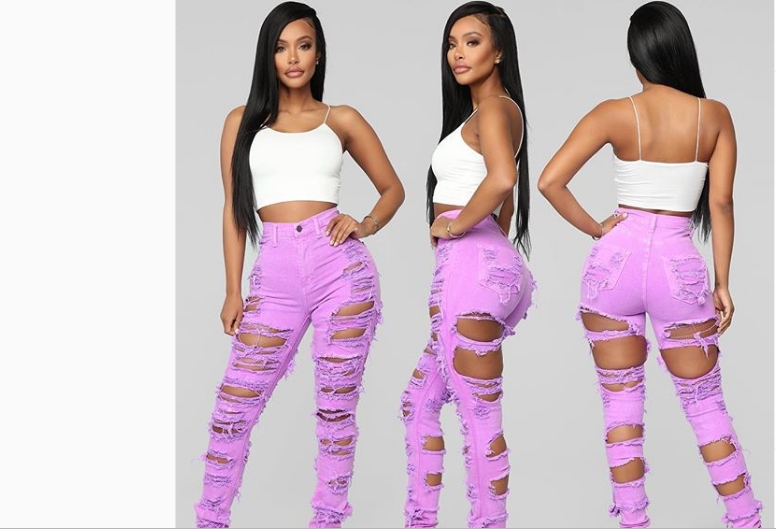 fashionnova- Every Color You Could Imagine; @instagram.com/fashionnova/

This article titled “Clickbait fashion! You won’t believe what brands are doing now” was written by Lauren Cochrane, for The Guardian on Wednesday 15th May 2019 07.00 UTC

Earlier this month, the US fashion brand Fashion Nova posted a picture on its Instagram account of a model wearing a pair of pink jeans with extreme rips. The image has had almost 20,000 likes and lots of comments – and not all of them the fire emoji. One follower wrote: “Do you have these in a ‘no thank you’”, while another compared the rips to “another DREADFUL bear attack”.

This isn’t just Instagram banter. Not long after the brand posted the image, the Sun picked up on the jeans, bringing them to the attention of a demographic that gets its news from more traditional sources than Instagram. Forget trends such as gingham or pastel gently trickling down from the catwalk on to the high street, the fashion pieces now most likely to make the news are the work of brands attempting to outdo one another with more and more attention-grabbing garments. Welcome to the world of clickbait fashion.

And it’s a strategy that is working. You may not have heard of Fashion Nova – and are even less likely to have bought anything from it – but it is the fifth biggest brand in the US among teenagers (for context, Amazon is number one). Brands such as Asos and Topshop, as well as high-end labels such as Balenciaga and Y-Project, have all been the subject of much-shared news stories where a single item is ridiculed for being – delete as appropriate – unwearable/ugly/ludicrous/laughable. See Topshop’s PVC see-through jeans, a croptop for men from Asos that skims the top of its wearer’s nipples, Balenciaga’s bootcut jeans for men, Y-Project’s now infamous denim high-cut knickers (the Janties); and, in the past week, Fashion Nova’s “see-through coverup chaps”, on sale for £19.

The world of clickbait fashion even has that modern measure of success: its own satirical Instagram. Asbos_sos highlights all of Asos’s supposed sartorial fails. In one recent post, a red PVC zipped T-shirt is compared to an outfit Britney Spears wore in 2000’s Oops! … I Did It Again video. In many ways, this is the next phase of the fashion meme – and another example of the internet having a good laugh at fashion’s expense. Over the past five years, everything from Rihanna’s Met Ball “omelette dress” to Balenciaga’s Joey Tribbiani-style layered jackets have been turned into social-media fodder.

If that sounds like a negative for brands, don’t be fooled. This is a case of all publicity being good publicity. Janties endured a comprehensive take down on Twitter at the start of April. But, by the end of the month, there was a 2,250% increase in searches of the design according to the global fashion search platform Lyst, which tipped them as the jumping off point for festival trends this year, and they had sold out on the retail platform Ssense. “Hype is real,” says Lyst’s vice-president of communications, Katy Lubin. “If a product goes viral for any reason, whether that’s because people think it’s incredible or people think: ‘Oh my God, I’d never wear that thing,’ what we see is that it causes this dramatic, often 1,000%-plus spike in searches for that particular product.”

Anastasia Denisova is a lecturer in journalism at the University of Westminster and has written about viral culture. She thinks part of the reason social media users like these kinds of posts is down to “the debate” and how it can increase your online status. “You can make fun of ridiculous fashion choices or outfits and get several benefits at once,” she says. “The reputation of a witty person who makes others laugh; a feeling of being part of a community as others join in the mockery and the chance to defend your own identity and fashion choices, which may not be that exciting but may, nonetheless, be more sensible – especially in contrast to see-through plastic jeans.”

As much as these products promote ridicule, they are being bought by a growing band of more experimental consumers. The see-through jeans are a case in point – they sold out. Topshop’s global design director, Anthony Cuthbertson, says they were a “limited-edition run for our early adopters who like to experiment – we like to give them things they can have fun with”. Cuthbertson is also on board with the reaction that comes with such items. “[The transparent jeans] got discussed extensively in the press and on social media and we loved the debate they sparked,” he says.

The tension between the extreme end of fashion and the rest of society is far from new. Designers have always enjoyed creating things that shake up the status quo and scare the squares. Claude Montana’s collections in the 80s had the look of an S&M club, while Alexander McQueen’s bumsters brought the young designer into the public eye, due to the low cut design that revealed the top of the wearer’s bottom. Mainstream culture loves nothing more than mocking the madcap world of high fashion. In an interview with a young Vivienne Westwood on Wogan in 1988, Sue Lawley asked “if people were supposed to laugh” when looking at her clothes.

The difference here may be that fast fashion brands – traditionally less madcap than the catwalk – are now involved. Topshop et al are arguably following the example of the biggest disrupter in the current fashion landscape, Demna Gvasalia, the founder of Vetements and creative director of Balenciaga, famous for the £185 T-shirt Vetements made with the DHL logo, the £1,600 version of the Ikea Frakta bag and the original Dad sneakers, the Balenciaga Triple S. The brand’s bootcut jeans for men – reminiscent of the kind worn around 2002 typically with smart shoes – had the clickbait treatment in December after an article on GQ.com proclaimed “bootcut jeans are making a comeback”. Typical responses on Twitter ranged from “our society is crumbling” to “thank u, next”.

Tyler Watamanuk is the journalist who wrote the article and says it is the most shared piece he has written for the site. He sees this development as symptomatic of bigger trends. “I think this current era of fashion is heavy on maximalism and big ideas,” he says. “Designers are taking bigger and bigger swings at new designs so there are bound to be some misses. And those misses just happen to be excellent fodder for memes.”

Whether or not brands are creating pieces specifically for memes is unclear, but it would make sense. “I would imagine there’s a certain amount of being provocative and meme-baiting going on,” says Lyst’s Lubin. “As with any customer behaviour, smart marketers will be looking for ways to engage and resonate with those customers.”

Watamanuk argues that Gvasalia is a pro at this: “He’s built his career on this type of nonsensical grabby design,” he says. It’s a model that works: for 2018, Balenciaga has been the fastest growing brand in the luxury conglomerate Kering.

A sense of community is something that social media will always have in its favour – it is where we can unite in outrage over a politician’s controversial remarks, a Game of Thrones plot fail and, yes, what might be deemed questionable fashion. “There is this playground community feeling in these episodes,” says Denisova. “Mockery and satire have always been around, for centuries, it is an outlet that permits us to laugh at ourselves, see life a bit less seriously.” For Watamanuk, “as a writer, it’s a little disheartening to see a short news article of yours get this much attention … but you can’t control the internet.”

Plus, he says, “any chance to spark a day where we all roast bootcut jeans is OK with me”.