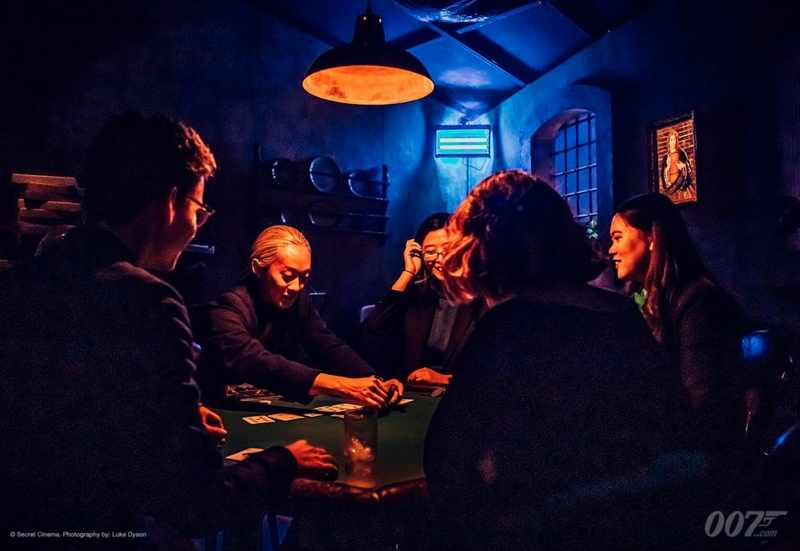 This article titled “Casino Royale is a busted flush. Five better Bond films for Secret Cinema” was written by Graeme Virtue, for theguardian.com on Wednesday 29th May 2019 12.14 UTC

When it comes to de luxe site-specific film screenings with steeply priced cocktail menus, nobody does it better than Secret Cinema. So it was only a matter of time before the pre-eminent curator of immersive movie experiences would tackle the world’s most famous agent provocateur. Its imminent Bond summer blockbuster will be a Casino Royale experience at a classified London location, promising glamour, intrigue and colour-coded murder-mystery party-style interactions.

But after building an entire 1950s US town square and a frozen Rebel base – as Secret Cinema previously for its Back to the Future and Empire Strikes Back events – hosting a casino-themed VIP martini party almost seems a little vanilla. Daniel Craig’s glowering debut as 007 might strike a useful note of artistic self-seriousness but would it have killed them to have gone a bit more bonkers with Bond? Here, for your eyes only, are some alternative suggestions.

You Only Live Twice

Looking back over the classic Connery Bonds, some would be easier to turn into immersive experiences than others. Thunderball probably features a little too much scuba-diving, but Goldfinger – where an unusually passive 007 gets kidnapped and then just lounges around drinking mint juleps – certainly has potential: a round of mini-golf with Oddjob, anyone? For sheer kiss-kiss-bang-bang-for-your-buck spectacle, though, the chance to hang out in a re-creation of the imposing volcano lair designed by Ken Adams for You Only Live Twice would be hard to beat. Free rides on Blofeld’s monorail to anyone who brings their own overalls and hardhat.

On Her Majesty’s Secret Service

Bond is unflappable, gliding frictionlessly through high-status gatherings on a slipstream of sexual energy. The rest of us are more like Johnny English, liable to pratfall through even the most basic interaction with a femme fatale or henchman. That makes things tricky for the plucky actors tasked with bringing Secret Cinema’s theatre of the real to life. So why not lean into all that awkward energy by doing On Her Majesty’s Secret Service? It’s the only Bond movie where our hero – in the strapping form of George Lazenby – seems a little confused at what’s happening around him, but just bumbles on regardless. (An added benefit: the alpine setting practically demands fondue as a food option.)

Proving that Roger Moore could still effortlessly raise an eyebrow even when experiencing heavy G-forces, Moonraker remains one of the most enjoyably daft Bonds. Who wouldn’t want to be shuttled to a lovingly reconstructed replica of Hugo Drax’s space station to method-act as one of the fusspot industrialist’s global collection of “perfect human specimens”? Throw in free-flowing caipirinhas to tie in with Bond’s Rio carnival trip and set up video game pods that challenge attendees with zapping all of Drax’s nerve toxin globes before they reach Earth’s atmosphere. The only downside would be everyone making jokes about re-entry.

Casino Royale is still viewed as a necessary back-to-basics corrective to 2002’s Die Another Day, the biggest and baggiest Bond. Pierce Brosnan’s final 007 outing remains painful to watch – but its overblown production design would lend itself to reimagining as an interactive experience. Secret Cinema could thriftily recycle some of their old Hoth sets to construct Gustav Graves’s ridiculous ice-palace base, and save even more money by putting up a “Please do not touch the invisible Aston Martin” sign next to an empty parking space. And perhaps most importantly, Die Another Day was also absolutely stuffed with gadgets … because what’s the point of staging an immersive James Bond experience if you don’t let punters wander through a recreation of Q Branch while men in lab coats test boombox missile launchers behind bulletproof glass?

Quantum of Solace … or The Bourne Ultimatum?

With 2008’s Quantum Of Solace, Craig was suddenly channelling Jason Bourne via crunching close-quarters combat that seemed a million miles away from Moore’s debonair karate chops. So why not skip 007 entirely and adapt Bourne instead? Admittedly, turning the amnesiac assassin’s globetrotting story of self-discovery and redemption into an interactive experience would present plenty of staging challenges. But I’d cough up £150 if it meant being the VIP tasked with walking into a bustling simulacrum of a Langley operations hub, pointing to a CCTV freeze-frame and delivering the closest thing the franchise has to a Bond catchphrase: “Oh my God, that’s Jason Bourne!”