‘Cars: Accelerating the Modern World’ exhibition at V&A Museum London explores how the car as a driving force has accelerated the pace of change over the past century. This automotive exhibition brings together 15 diverse cars to tell extraordinary stories about design and the car’s impact on the broader world. 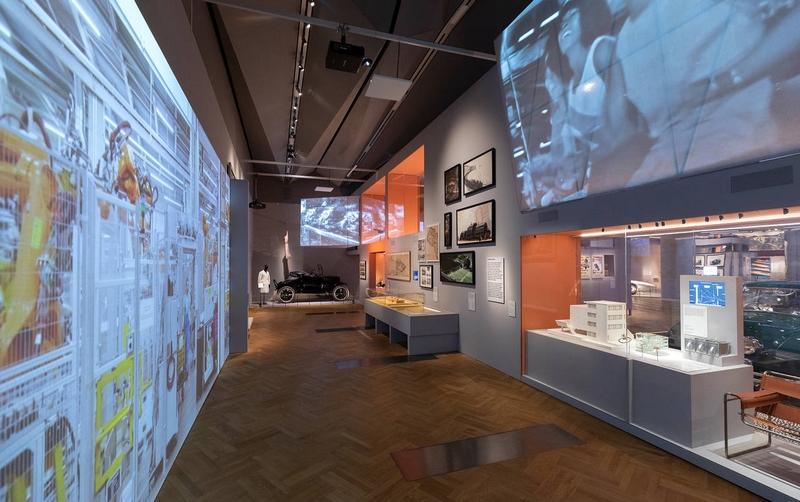 This article titled “Cars: Accelerating the Modern World review – revolutions behind the wheel” was written by Rowan Moore, for The Observer on Saturday 23rd November 2019 17.00 UTC

Cars. What? Cars, yes cars, planet-eaters and child-killers, climate-chokers and city-wreckers, antisocial, aggressive, exclusionary, tools and symbols of a world of consumerist selfishness. Un-woke. A subject that the Victoria and Albert Museum, currently under fire for taking money from the opioid-selling Sackler family, might want to avoid. In, though, it has plunged, with Cars: Accelerating the Modern World, a major exhibition on these motorised demons.

The exhibition has been a long time in the offing, with Norman Foster at one point involved, whose preference (one might guess) would have been for a celebratory parade of shining technology. Foster is still credited as an inspiration behind the show, but in the hands of the curators Brendan Cormier and Lizzie Bisley it is something nuanced and multifaceted. The idea, says the assistant curator Esme Hawes, is to show both the original promises of the motor car and its unintended consequences.

So it treads a path between Jeremy Clarkson and Greta Thunberg, a broad-enough terrain but a fraught one. There are cars – gleaming, drool-worthy objects such as the Czech Tatra T77 of 1934, a pioneer of streamlining, or an opulent Hispano-Suiza custom-built for Suzanna Deutsch de la Meurthe in 1922. There are also film clips, documentaries, trade union banners, advertisements, car-related clothing and artefacts, science-fiction comics. Specially commissioned films show the grassroots sport of car-spinning in South Africa and of the highly ornamented vehicles – great rolling palaces of glitter and electric light – of Japanese truckers.

The dark side of cars is included – the conditions of assembly-line workers, the death toll from accidents, the effects on climate – though doesn’t dominate. There is a compelling section on the ways in which Henry Ford learned from the production lines for dismembering pigs developed in the state of Ohio; a certain spirit of ruthlessness was carried over from the process of taking animals apart to that of putting cars together. A breathtaking 1970s advertisement for the Humble energy company, shocking and ironic at once, is displayed: “Each day Humble supplies enough energy to melt 7 million tons of glacier!” A photo of such a glacier appears above the strapline.

You see Jimmy Carter speaking from the Oval Office, with some of the downbeat tone that helped to make him – for all his many virtues – a one-term president. “Tonight,” he said, “I want to have an unpleasant talk with you.” The bad news he had to impart was that the United States was going to have to change its relationship to the artefact it had made its own, that defined its industrial might and its version of freedom. Americans, he said, would have to be more careful with their fuel consumption because the world was running out of oil.

Like some other recent and current shows (the Design Museum’s Moving to Mars, the Barbican’s AI: More Than Human, the V&A Dundee’s Hello, Robot) the exhibition has to demonstrate why it would not be more at home in the Science Museum. It is not just about technology, is the point, but about culture. The aim is to show how profoundly cars have changed almost every aspect of human life: social life, geopolitics, gender politics, city building, tourism, economics, ecology, landscape, industry, art, to name but 10.

For, if cars are all the bad things listed above, they have also been emancipating, energising, socially and economically transformative. They inspire devotion. They are objects of intense invention and creativity, as seen both in Henry Ford’s production lines and in the iridescent greens and yellows of Tipsy/Guardian Angel, a 1962 Chevrolet Impala convertible customised by a Latino Angeleno called Tomas Vasquez. A short distance from the glum Carter clip is a map annotated by his fellow Democrat Franklin Roosevelt, a little more than 40 years previously, on which lines of blue pencil denote the freeways that were to sweep across the United States. For FDR, during the depression, cars were signs of hope.

A recurring theme, indeed,, indeed, is the attachment of national significance to cars. There is the Paykan, a variant of the British Hillman Hunter, which in the time of the Shah became an unlikely symbol of Iranian identity. There is the Delahaye Type 145 of 1937, the successful outcome of a patriotic campaign to build a French car that could win races against the then-mighty products of the Nazi-backed German car makers.

With cars, fantasy and function have always been entwined. On arrival at the show you are greeted with a 1950s film envisaging a future in which a uniformed official in a control room – a sort of inefficient prototype of Google Maps – radios to drivers the best routes for them to take. Nearby you can see a drawing by a Soviet design student that, as early as 1928, proposed a car-like, bubble-shaped living pod of a kind that is still a popular version of what the future will look like. Next you see the Firebird 1 concept car of 1953, which set out to look like a jet fighter.

There’s an arresting section on the ways in which General Motors, in seeking to compete with the efficient monotony of Ford, started styling mass-production cars. Later they wanted to appeal to women, who, their research showed, had the “final say” in the majority of car purchases, with such things as pearls stitched into the seats and compartments for makeup. The exhibition touches on the ways in which, following the world of fashion, car manufacturers started restyling the product range every year to stimulate the appetite to keep buying new models. It shows the reaction against the imposition of corporate taste by, for example, customisation.

Cars now are on the brink of becoming something different – driverless, electric, networked – which may or may not make them more benign. The V&A show touches on this, with a final room showing a hypothetical car of the future, but the main aim is to show how the car got to be what it is now. The material is mostly from before 1980 – just as well, as the subject is already vast enough. Given that almost everything about life has been touched by cars, it would be possible to mount 50 different exhibitions on the theme, each with its own set of exhibits, each equally valid.

This one does a good job of navigating the difficult territory between piston-engine porn and climate apocalypse. It doesn’t try to draw conclusions or give lectures – in which respect its retrospection makes its avoidance of contemporary controversy easier. The viewer is allowed pleasure at the beauty of some of the creations, fascination with the human brilliance and human foibles at work, and recognition of the accompanying destruction. It’s not agitprop, it’s arguably a touch complacent, but it provides a valuable and arresting set of insights into one of the makers of the modern world. Which, in fact, is quite a lot for one exhibition.