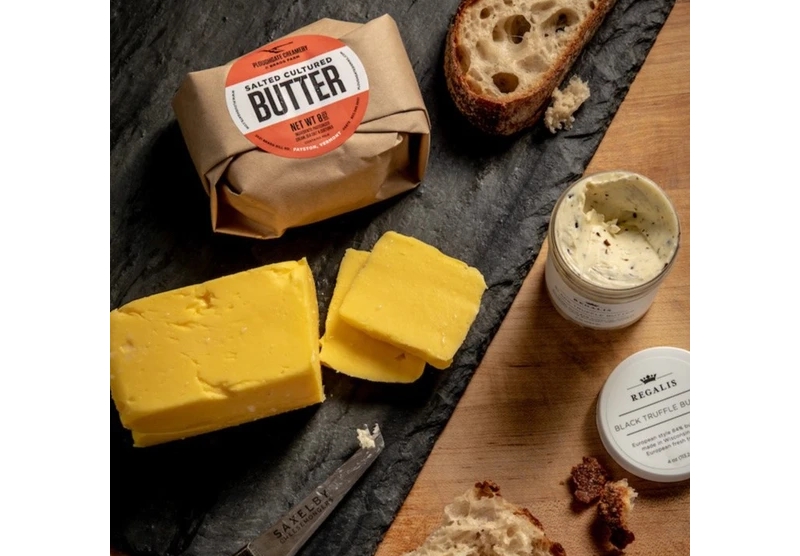 This article titled “‘Butter makes anything taste amazing’: why Michelin-starred chefs dollop it on” was written by Laura Martin, for theguardian.com on Friday 4th December 2020 12.24 UTC

When things started to go a little … awry this year, I retreated to my kitchen. Alongside the understandable increase in our consumption of alcohol and chocolate, I soon realised that our household was flying through packs of butter like, well, a hot knife through a block of the stuff.

Related: ‘In Ireland we’ve been making butter for thousands of years’: meet the farmer with dairy in her genes

It quickly became apparent why it was disappearing so fast. Think glistening golden trails tracing the crevices of sourdough toast (shop bought, after my homemade attempts were swiftly binned); great dollops to make a rich and creamy mac‘n’cheese; the double helpings in banana bread – a hefty dose melted into the sweet batter, and even more dotted on top of each toasted slice. Roast chicken massaged with a herb-infused butter; little blueberry pancakes cooking in a beurre noisette; tortellini resting in a shimmering, sage-flecked puddle … you get the picture.

I craved comfort; simple yet decadent pleasures and flavours – and it was butter, the most glorious of ingredients, that served it up in big spoonfuls, like balm for the soul.

If it sounds as if I’m placing it on a pedestal: absolutely. After all, butter was literally deified at the time of its discovery. After Neolithic man first realised that a container of animal milk, when left to slosh about on the back of a trekking animal resulted in strange yellow globules, it was spread thick with spiritual and medical significance.

“Across so many cultures, there were mystical superstitions around butter,” says Elaine Khosrova, who spent four years researching her book, Butter: A Rich History. “It was deemed sacred by the Druids, the Sumerians, the Vedic Aryans; all sanctified butter. It was a precious and mysterious food, and due to its delicate temperament, it was said to be controlled by the gods.”

The advent of the industrial age led to a boom in butter production, without divine intervention. Today it’s still a heavenly ingredient for home cooks and professional chefs.

The late Anthony Bourdain gave away the chef’s biggest secret in his book, Kitchen Confidential, when he revealed one of the linchpins of French haute cuisine: “Believe me, there’s a big crock of softened butter on almost every cook’s station. In a professional kitchen, it’s almost always the first and last thing in the pan.”

Some 20 years on – or 120 years since Auguste Escoffier, the legendary French chef, first loosened the grip on the butter knife by adding swirls of dairy to many of his dishes – it’s still industry standard. Marcus Eaves, executive chef at The Shard’s Oblix, says: “My first ever head chef told me the difference between a good dish and an exceptional one was a healthy dollop of butter. The first few years of being in the kitchen I didn’t believe him but now I’m 100% sold on it.”

Let’s take mashed potatoes, an easy side-dish that when made at home never quite matches the restaurant version. This is down to the (borderline unbelievable) golden ratio of 2:1 that restaurants use; half the weight of butter to the weight of potatoes. As it happens I do actually know this, I regularly lose a whole block of Kerrygold in seconds when mashing at home. “It’s what Anthony would want,” I whisper, scraping the last dregs from the shiny wrapper into the steaming saucepan.

Ricky Payne (AKA @whyte_ rushen), one of the chefs at Brat in east London, also knows the allure of a dish that guest-stars butter. His swoon-worthy recipes regularly grace Instagram – from pumpkin ravioli sliding through brown butter, to miso-butterscotch caramelised bananas, pretty much every idea gets added to my “must cook” list.

He says the likes come flying in when he posts an obscenely fancy dish: “If it’s dripping in butter, everybody loves to see it. They’ll slow down for butter, they’ll stop and observe it … glistening, salty, mouth-coatingly tasty.

“People associate it with richness, with luxury and flavour,” he adds. “And to be fair, butter makes anything taste amazing. It’s the great eraser and it’s the great enhancer. In Michelin-starred kitchens it’s used just like tap water, and our number one rule is: do not run out of butter.

As we move into what’s set to be a highly unusual Christmas, dishes that invoke a hefty whack of nostalgia will soon start appearing, which will be another source of joy to me. Flavoured butters, made with Kerrygold’s rich and creamy offering, are a treat for the tastebuds. Whether sweet and dosed with brandy or Cointreau, or savoury, with tarragon, rosemary or thyme, the result is little flavour bombs that burst into a mouthful of glorious technicolour.

My favourite of all has to be whipped anchovy butter, served with radishes for dipping; a sort of chilled, British take on the Italian bagna càuda. This salty-umami mix also tastes incredible melted through cooked veggies such as broccoli, or even just stirred into a bowl of plain linguine.

Curries are going to power my house all winter long, and by clarifying butter (melting and removing the milk solids) and making ghee, you have the greatest starting point for cooking onions, garlic and spices to create an epic post-Christmas turkey or tofu curry. I also serve ghee in a spicy, hot- buttered rum, and once again am reminded why it is such a gleeful addition to food or drinks: it’s a warm hug for your insides.

Payne’s words are still ringing in my ears, though. I must not run out of butter. It’s going to be a long winter – let’s keep things delicious.

Going for gold
Push the boat out this Christmas with a buttery feast of flavoursome treats. Stuck for ideas? Discover what a difference creamy Kerrygold Pure Irish Butter makes by whipping up a few of the treats at kerrygold.com/recipes