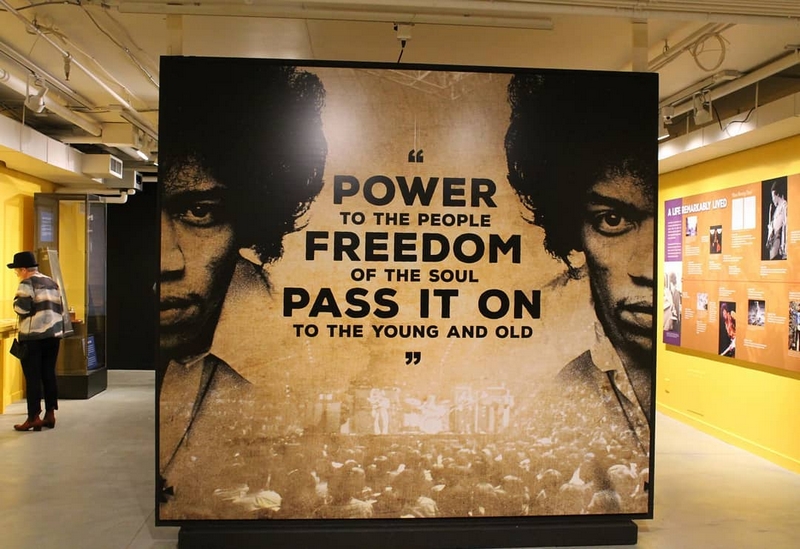 His famous words will sit alongside a great deal of impactful art this Black History Month, all through February. Alongside the more blockbuster events (Black Panther will be screened free of charge at selected theatres), expect to find a Harlem renaissance-style speakeasy, vintage photos of a black sports icon and artworks by Jimi Hendrix.

On the heels of the success of the Soul of a Nation: Art in the Age of Black Power, an exhibit at the Brooklyn Museum that just ended, here are seven must-see exhibits to catch through February.

Classic photos of the civil rights leader Martin Luther King Jr are everywhere, but the lesser-known, more intimate moments are scarce. Some of these rare shots are on view at the Schomburg Center for Research in Black Culture in Harlem, featuring shots of his travels across the world, on view until 6 April. From his trip to India, where he learned about non-violent resistance, to his trip to Norway to accept the Nobel peace prize, this exhibit marks the 60th anniversary of the first biography written about King, Crusader Without Violence by Lawrence D Reddick in 1959.

The center is also hosting a pop-up exhibit to celebrate the 118th birthday of the Harlem renaissance poet Langston Hughes. The lobby will turn into a Harlem speakeasy-style salon to celebrate the works of writers such as Hughes, Zora Neale Hurston, Canada Lee and Hilda Simms.

Harlem has always been a hub of black art and culture and remains vital to this day. A selected number of local artists working uptown are featured in Harlem Perspectives II at Faction Art Projects. Showcasing artists who live and work above 110th Street in Manhattan, there are works by Elan Cadiz, who crafts family portraits from fabrics, to marble sculptures by Kennedy Yanko. There are also abstract paintings by Patrick Alston, who lives – and finds his inspiration – in the neighborhood.

“Harlem is an essential place for understanding the essence, resilience and brilliance of black culture,” said Alston. “Black history month is a time to reflect on the significance of black achievements and there is no better place to understand this than through the mecca of black excellence that is Harlem.”

In the Dugout with Jackie Robinson: An Intimate Portrait of a Baseball Legend

In 1947, Jackie Robinson made history when he joined the Brooklyn Dodgers as the first African American major league baseball player. Robinson’s legacy is remembered on the year of his 100th birthday at the Museum of the City of New York, which runs until 15 September. On view are rare photos of Robinson in the clubhouse with his team-mates and at home with his family. Whitney Donhauser, the director of the museum calls Robinson “a true American icon”.

“Robinson’s trailblazing years as a Brooklyn Dodger captivated the country,” she said, “and these photographs offer an intimate glimpse of a defining period in American sports history.”

Black Refractions: Highlights from the Studio Museum in Harlem

The Studio Museum in Harlem was founded in 1968 as a space for black artists to shine. Now, as the museum undergoes a renovation, slated to reopen in 2021, this touring exhibition, co-hosted by American Federation of Arts, will visit six venues across the US. It kicks off at the Museum of the African Diaspora in San Francisco. As part of Harlem’s prized art collection of African American art, a number of artists are brought to the spotlight, including Faith Ringgold, Kehinde Wiley and Juliana Huxtable.

“The exhibition will add to an expanded view of American art history,” said Pauline Willis, the director of the AFA. “Many are not fully aware of the tremendous contributions artists of the African diaspora have made to American art.”

The famed AfriCOBRA art movement co-founder Jeff Donaldson takes the spotlight at Kravets Wehby Gallery in New York, showing his intricate paintings, watercolors and collages from the 1960s through the late 1990s. Some of his most iconic works will be on view, including Donaldson’s last painting, a portrait of three trombonists. A critical voice to the Black Arts Movement of the 1960s and 1970s, Donaldson created historic artworks such as Aunt Jemima and the Pillsbury Doughboy, a painting of a black woman being battered by a white police officer. Donaldson started this painting after the civil rights March on Washington in 1963. The exhibit opens 28 February.

The Chicago photographer Dawoud Bey has traced the Underground Railroad path to freedom in his latest exhibition at the Art Institute of Chicago. Night Coming Tenderly, Black is a series of black-and-white photos that follows the fugitive pathways from the south to Canada, which helped enslaved African Americans to freedom in the 19th century. “All across the globe, people are moving across the landscape in pursuit of freedom, an opportunity to live their lives in freedom,” said Bey. “Their flight is as imperative as the flight of those enslaved and seeking their freedom during the antebellum era of the Underground Railroad.”

Photos of the psychedelic rock star at home in the 1960s are on at the Northwest African American Museum in Seattle, which was Jimi Hendrix’s hometown. A number of rare family photos are shown alongside artworks made by Hendrix and his personal artifacts, offering a window into his inner world.

“There is always a need to document, support, elevate and recognize the contribution of African and African Americans to provide visibility, agency and a collective voice for a culture,” said Hasaan Kirkland, the museum’s curator. “It’s a culture that does not always receive national, regional or local acknowledgement that leads to an outward societal measure of respect and revered significance of worth, purpose and magnitude in this society.”