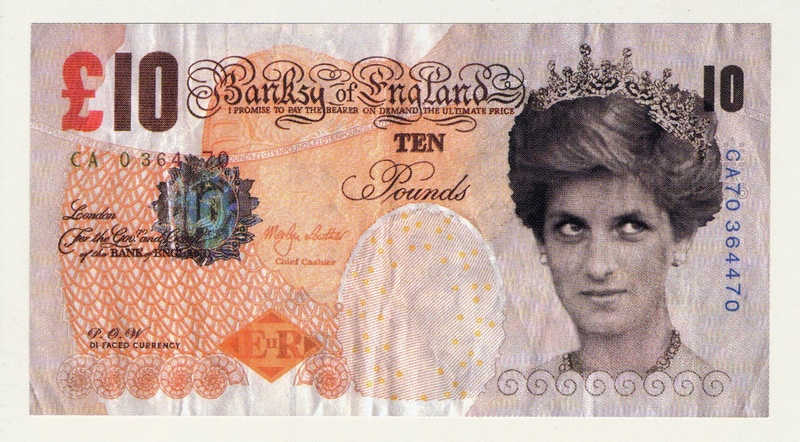 More than a decade after he cheekily stuck a fake artwork to the wall of one of its galleries, Banksy has officially joined the collection of the British Museum for the first time.

The museum has acquired its first work by the anonymous graffiti artist, a fake £10 banknote depicting Diana, Princess of Wales, which will join its collection of coins, medals and other currency.

The work, entitled Di-faced Tenner, was one of thousands of copies produced by the artist in 2004 as part of a planned art stunt. Unlike the other artwork, a fake cave painting on concrete, which was loaned again to the museum for a recent exhibition on dissent and protest, the note has been donated to the museum by the artist’s representative Pest Control.

Tom Hockenhull, curator of modern money at the museum, said he had been trying for years to get hold of a genuine Di-faced Tenner to add to the museum’s collection of “skit notes”, or parodies of real banknotes. “The problem is, because [Banksy] was effectively producing them as photocopies, anyone else could do that as well, so there was no way to really verify whether they were from Banksy or not.”

The artefact would complement other objects held by the museum, he said, such as the bank restriction note made in 1820 by the celebrated caricaturist George Cruikshank, which depicted 11 people being hanged to illustrate the human cost of Bank of England policy at the time.

Contacted by the Guardian, a spokesperson for the artist said the banknote had been donated by “someone who runs Banksy’s currency exchange”.

As well as showing Diana’s face instead of the Queen’s, the note has been altered to read “Banksy of England” and the motto: “I promise to pay the bearer on demand the ultimate price.”

“There is a long history of political and social discourse through this type of protest which made us keen to acquire it,” Hockenhull said. “Also, it’s a Banksy – why wouldn’t we want it? It’s an opportunity for us to have a work by an artist of that stature as part of a collection that people might not consider the typical respository for a work by Banksy.

“From our perspective, it joins a long list of artists who have created, adapted or destroyed currency for the purposes of their work.”

The artist described the origin of the Diana £10 notes in his 2010 Oscar-nominated film Exit Through the Gift Shop, saying he had made £1m pounds worth, planning to throw them off a building. He had handed some notes out at Reading festival, but realised the stunt was backfiring when people started taking them to the bar to spend. “It was like, holy shit, we just forged a million quid, and obviously for that you’d go to jail for ten years.” Distribution was speedily halted.

Banksy made the headlines in 2005 when he surreptitiously hung the small piece of concrete, daubed with a stone age hunter and a shopping trolley and accompanied by a fake note calling it the work of “Banksymus Maximus.” Although the artist stuck it to the walls of the museum, where it went unspotted by staff for several days, “legal title was never transferred,” said Hockenhull. “For legal purposes we had to treat it as lost property, effectively.”

The work, called Peckham Rock, was loaned to the museum last year for an exhibition curated by Ian Hislop called I Object, which explored the history of dissent, but returned to the artist when it concluded. “I’m sure we’d love to have that in the collection but I don’t think that’s an offer that’s forthcoming,” Hockenhull said.