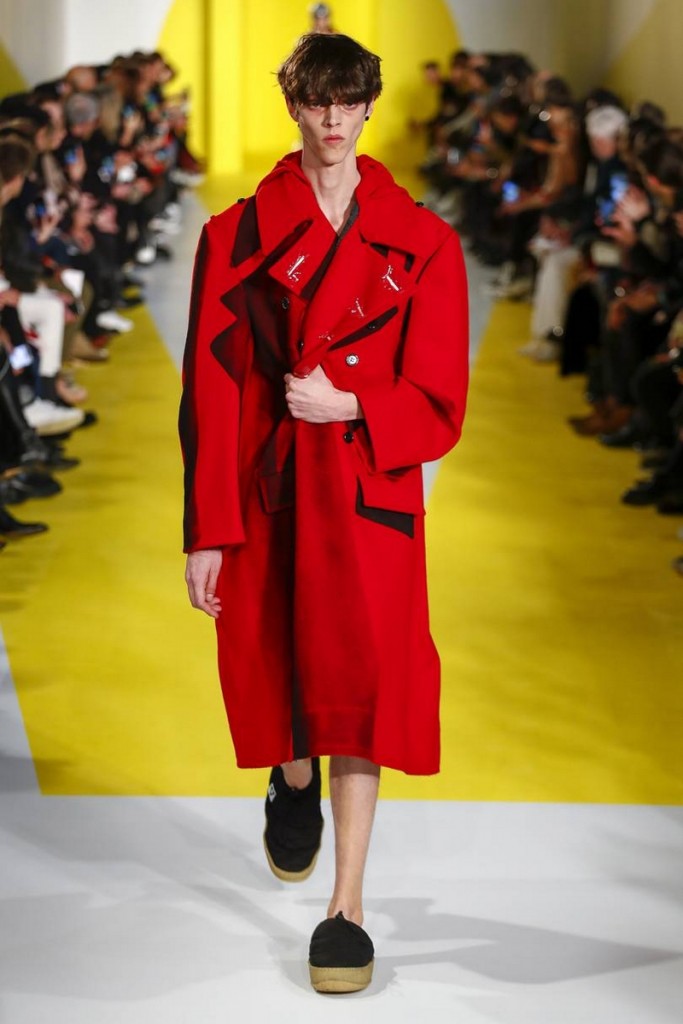 This article titled “Be bold or don’t bother: eight definitive autumn menswear trends” was written by Simon Chilvers, for The Guardian on Wednesday 10th October 2018 06.00 UTC

Coats this season have gone somewhat directional: think volume and oversized or something punchy and bold. I’m calling the former the “drown me” coat and can confirm it’s brilliant for layering. There’s a fabulous example in the new film American Animals of a too-big trench that showcases perfectly the breeziness of this shape. Meanwhile, Topman has an abundance of coats prefixed with the word “oversized”. It also has a red double-breasted below-the-knee coat, which if you squint is not a million miles from the delicious ketchup overcoat that opened the Maison Margiela autumn/winter men’s show. Basically, be bold or don’t bother.

Brown rather than black

The Italian label Marni opened its show with a silver-haired model in a super-long, brown double-breasted coat. It looked divine. Note: brown clothes and grey hair are a winning combination. Haider Ackermann’s Berluti collection teamed brown with duck-egg blue; I’m proposing this as colour combo of the season. Brown is also being championed by Dr Klemperer in Luca Guadagnino’s Suspiria remake – the trailer is enough to make the most seasoned fashion fan require a lie-down. Uniqlo U (the line designed by Christophe Lemaire) has an extremely pleasing brown chesterfield coat for £129.90 alongside other brown pieces worth investigating. And brown actually works brilliantly with, yes, black.

Tate Modern’s forthcoming retrospective of the German textile artist Anni Albers should be a fantastic showcase of more than 350 objects. But what is the fashion connection? Well, there are whiffs of Albers’ trademarks rippling through some of the best knitwear this autumn. For inspiration, look at knitwear designed by Raf Simons for Calvin Klein, in brown, which features a floating jacquard design with loose strands artfully hanging from it, or Saint Laurent’s monochromatic crew neck with intarsia stripes, which resembles the artist’s woven designs. This look can also be found at Zara in a grey multi-thread number, or an ecru-and-black drop-shouldered jacquard jumper, both just under £50.

Small bags may be out for women, but, for men, teeny-tiny accessories (an evolution from the bumbag trend) are all the rage. Jason Hughes, the fashion editor at Wallpaper* (who has a mini Prada bag in blue), concurs: “It’s very freeing and liberating, a refreshing antidote to carrying a cumbersome tote with all that everyday junk in it.” Understandably, a small bag may seem a bit useless. Unless you’re heading out straight from work, in which case leave that cumbersome tote at the office – for more leg room at the theatre etc. Travelling? Much easier to locate your passport in your minuscule bag than that hulking rucksack – also easy to sneak it on the plane as an extra bag if you wear it around your person. Prada’s is about £300, but you can get decent variations on this theme from Cos.

What to do about Insta-fashion, clothes designed for your feed rather than for looking chic. There are signs of a shift brewing. Vogue Hommes Paris addressed this notion with the cover line: “Chic is back.” The Row, the women’s label by the Olsen twins, known for luxury minimalism, is launching menswear, while Riccardo Tisci’s first Burberry show last month featured a series of very restrained looks built around clean lines and tailoring. The concept of chic to me is the French actor Louis Garrel in an overcoat, vintage Jil Sander or an “easy suit” look. The latter is achievable via Arket (sizes come up small) and Cos, which both offer modern versions of tailored jackets that feel relaxed rather than stuffy. And after all, ease is surely the epitome of chic.

I’ll keep this brief. There is nothing exciting to say about Chelsea boots or cult flashy sneakers. Instead, buy some shoes or boots that have a chunky sole – something that makes you walk as if you’re taking part in a Rick Owens show. The brand Marsèll is very good at this, as is Prada. My latest stompers are from Grenson’s collaboration with Craig Green. The high street is full of Dr Martens-inspired treads from Office to Asos. That’s all.

Designers at all price levels are making this area of menswear more interesting. There are lashings of cropped trousers: still relevant. Wider shapes are also making waves. Fantastic Man has an entire feature dedicated to the return of high-waisted slacks, while Stella McCartney and Wales Bonner are making a case for combats – chic ones. There’s a lot going for this idea: if your bag is minuscule, you can put your wallet in your trousers, and they look sublime with a stompy shoe and an Anni Albers-style knit.

More of a sidenote, as it’s not for everyone, but the talking point this season is the balaclava. Inspired by Calvin Klein’s version, it is admittedly niche, but will see you through a blizzard with full fashion reputation intact. Alternatively, you could go headscarf (Gucci), bucket hat (Prada) or even gimp mask (Moschino) – each claims to be runway-approved. But if I were to argue the case for a playful hat this season, it would the bobble beanie. See Acne Design for fancy, or River Island for a bargain. I’m sure there is an age limit on this, but age limits are always very last season.