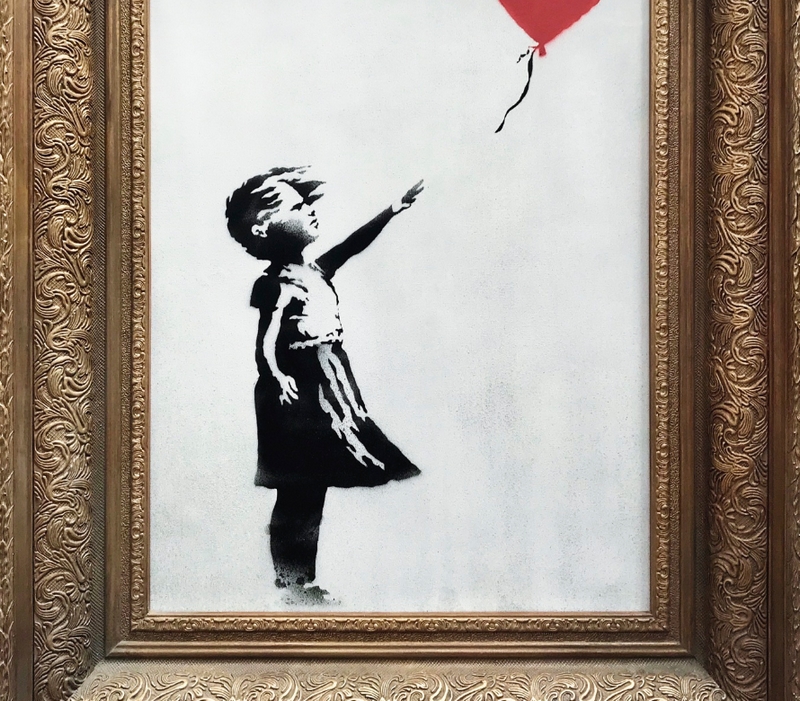 This article titled “Why putting £1m through the shredder is Banksy’s greatest work” was written by Jonathan Jones, for The Guardian on Monday 8th October 2018 15.44 UTC

The moment I love most in the video Banksy has released of his latest art stunt is when a bespectacled man with the well-groomed air of an art-world professional puts his hand to his forehead in apparent disbelief at what he is seeing: a million quid being shredded. He looks genuinely frightened that the revolution has reached Mayfair and that activists are about to storm Sotheby’s, where Banksy’s framed picture Girl With Balloon has just mechanically self-destructed – shortly after going under the hammer for a little more than £1m.

If this moment of artistic terrorism last Friday really had been – as at least one member of the audience appeared to think – the sign for all the collectors and dealers assembled at yet another big-selling night in the art industry to be dragged out of the auctioneer’s and shot, there would be VIP blood in the gutters of New Bond Street. For Banksy put his artwork through the shredder at the climax of the busiest week in the London art market, when international collectors fly in for the Frieze art fair and its satellite parties, private views and purchases. “In the spirit of Frieze week, the October contemporary art evening auction is led by a selection of outstanding works,” enthused Sotheby’s about its sale. Apparently, it had no idea that one of these modern treasures was booby-trapped.

Yet, by the next morning, self-proclaimed market insiders were claiming to be the first to get Banksy’s joke. (Others say the stunt is a hoax.) One, Joey Syer, an online art broker, was offering bullish “insight” to the media: “The auction result will only propel [Banksy’s prices] further and, given the media attention this stunt has received, the lucky buyer would see a great return on the [£1.042m] they paid last night. This is now part of art history in its shredded state and we’d estimate Banksy has added, at a minimum, 50% to its value, possibly as high as being worth £2m-plus.” Despite Syer offering no evidence for this claim, it got into the media. After all, such cynical savoir-faire sounds plausible if you have followed the freakonomics of art. Of course Banksy doubled the value of Girl With Balloon by destroying it. The art market always wins.

I beg to differ. I am not exactly Banksy’s biggest fan. I walked around his anti-theme-park Dismaland with a frown on my face, not because I was part of the performance, like the grim and sulky greeters, but because I found it truly dismal. But the rush for knowing insiders to say Banksy’s art is more valuable now is beside the point. Yes, rebellion is always being reclaimed. Yes, everybody knows the dice are loaded, everybody knows that the good guys lost, as Leonard Cohen observed. But come on. For once, an artist has genuinely pissed all over the system that reduces art to nothing but a commodity. What happened at Sotheby’s is Banksy’s greatest work. He has said something that needed to be said: art is being choked to death by money. The market turns imagination into an investment and protest into decor for some oligarch’s house. The only real rebellion left is for works of art to destroy themselves the moment they are sold.

Banksy’s Million Quid Artwork Destroying Itself – as perhaps we should call this masterpiece of radical performance – belongs to a tradition of destruction in art that is only just 100 years old. In 1917, a porcelain urinal, titled Fountain and bearing the signature “R Mutt” in crudely daubed black paint, was submitted to a New York art exhibition. Marcel Duchamp, the man behind the stunt, is often seen as a dry, ironic wit whose “readymades” are dissected reverently as philosophical conundrums, but that does an injustice to the anger and contempt in his gesture. To call a pissoir Fountain was to urinate on high culture – and that could not be a neutral gesture in 1917. Duchamp was part of the dada movement. This deliberately reductive and primal movement – the name imitates baby talk – was begun by pacifist German draft dodgers in exile in Switzerland in 1916 and spread to Berlin, Paris and more cities by the end of the first world war.

The dadaists hated the European culture of fine art and self-conscious sensitivity that could slaughter its youth by putting them through the giant human shredder that was the western front. All sides in the first world war claimed to be defending “civilisation”. The dada generation spat on that civilisation. In his 1919 work LHOOQ (which sounds like the French for “she’s got a hot arse”), Duchamp drew a moustache and small goatee on a reproduction of the Mona Lisa. He also said he wanted to “use a Rembrandt as an ironing board”.

The problem with the anti-art tradition that started with dada’s violence against the very idea of culture is that, over the past 100 years or so, it has been assimilated into the mainstream of modern art. The sassy and slick smart alecs who are claiming that all Banksy has done is add value to his work are the latest in a long line of art-world insiders who have turned dissidence into art history. As an older man in the 60s, Duchamp was embraced by the establishment. Replicas were made of his lost Fountain. There is one in Tate Modern today.

The Young British Artists saw the commercial potential of Duchamp’s ideas. You could put a shark in a tank and call it art, then turn it into money. The result is what Banksy’s video of the crowd at Sotheby’s shows: an international community of the well-heeled spending their money on art that has an aura of dadaist danger. As well as Banksy’s Girl With Balloon, the auction included a slashed white canvas by Lucio Fontana and a painting by Piero Manzoni, whose most notorious masterpiece is a can labelled Merda d’Artista (Artist’s Shit).

Looking at these lots, the game being played at the auction is not that subtle. On the one hand, the collectors were being offered the thrill of anti-art. On the other, they were being sold nice paintings to hang at home. Beauty with just a whiff of the urinal, the artist’s merda, the street. Banksy’s Girl With Balloon seemed to fit this shallow Janus-faced aesthetic perfectly. He is an artist famous for working in the street, painting, with the help of stencils, images of kissing coppers, cheeky rats and flower-throwing anarchists on walls all over the world. Yet Sotheby’s was selling a finely framed version of one of his most famous graffiti images – literally domesticating his art by turning it into a luxury painting, a modern Mona Lisa.

Perhaps they should have wondered why an artist known for rebellion would create something so posh-looking. But no one guessed that Banksy had been studying modern art history. For hidden inside his painting was a device inspired by one of the most stubbornly subversive offshoots of the dada tradition. The Britain-based artist Gustav Metzger invented auto-destructive art at the start of the 60s, just as Duchamp was being assimilated as glossy pop. In his most spectacular demonstration of the idea, he “painted” a sheet of white nylon with acid in front of an audience on the South Bank in London. The act of making this artwork also destroyed it.

Metzger had reasons to be angry. As a Jewish child in Nuremberg in the 30s, he witnessed some of the Nazis’ biggest rallies. He was saved by the Kinderstransport, but lost his family in the Holocaust. For him, auto-destructive art was part of a lifelong refusal to be part of the capitalist system. One of his keenest disciples was a young art student who met him at Hornsey School of Art and went on to become a rock star. Pete Townshend saw his regular smashing of guitars in Who concerts as auto-destructive art.

Auto-destruction is one of the hardest acts for the commercial art world to assimilate. When Michael Landy destroyed everything he owned as an artwork, it was a conscious farewell to the commodity art of the Hirst generation to which he belongs. When the K Foundation burned a million pounds, their gesture was so far outside the ethos of mainstream art that it was barely recognised as art at all – more like a bloody stupid waste of money.

When the auctioneer’s hammer came down at Sotheby’s and a “modern masterpiece” began to eat itself, the stage was set perfectly. Here was the art world’s moment of truth – however theatrical and multifaceted it may prove to be. Of course, this revolt will be assimilated. Of course, the market will smile and the cash tills will go on ringing. Yet for once the commodity bit back. Art turned on the hands that feed it.

In principle, all artists should do the same until the market is cut down to size and stops defining the art of our time. Most won’t, of course, for good reasons such as the need to make a living. Yet Banksy has let a little light into a very claustrophobic room – and proved he is the artist who matters most right now.