In November, Sotheby’s concluded a month of worldwide sales spanning New York, Geneva, London, Paris and online, with 1,675 lots sold over twelve auctions for a total of more than $1 billion. Across the auctions, nineteen lots exceeded $10 million and ten lots exceeded $20 million. From 20th- and 21st-century art to magnificent jewels and rare watches, auction history was made throughout the month and around the globe. 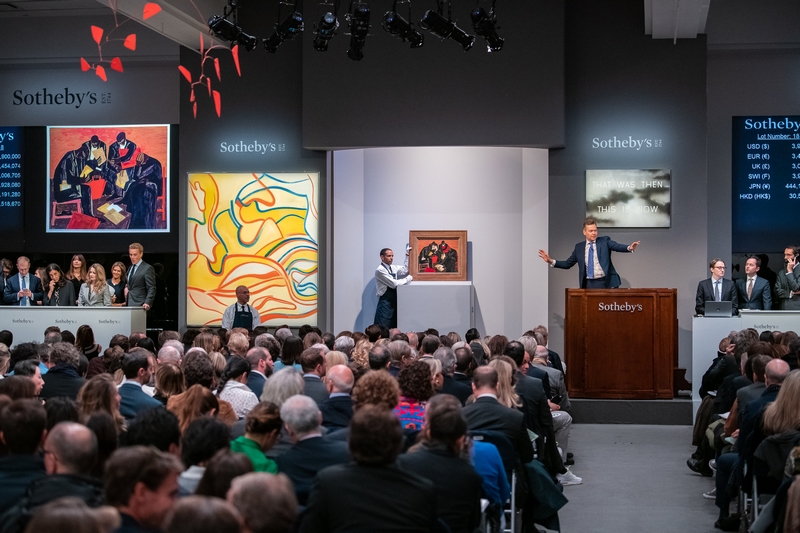 Sotheby’s Contemporary Art Sales totaled $463 over two days, up 12% over November 2017. The Contemporary Art Evening Sale boasted an exceptional sell-through rate of 97%. Eleven records were set for Contemporary artists across the series, led by benchmark prices for Jacob Lawrence, Jack Whitten, Dana Schutz and Henry Taylor. Sotheby’s worldwide auctions of Contemporary art are up 22% year-to-date over 2017, announced the auction house.

Sotheby’s Impressionist and Modern Art sales totaled $373 million over two days, an increase of 20% over November 2017. The sales saw a new world auction record for icon of Surrealism René Magritte, whose portrait of patron Edward James sold for $26.8 million. A number of recently restituted works also exceeded expectations, with stellar results for Egon Schiele, Ludwig Kirchner and Oskar Kokoschka. There was bidding and buying from Asian clients on 25% of the Impressionist & Modern Art Evening Sale. Sotheby’s worldwide auctions of Impressionist Art are up 13% year-to-date over 2017.

Sales of Watches and Jewelry totaled $125.1 million this week at Sotheby’s Geneva, with 70% of sold lots exceeding their high-estimates. The series saw participation from 1,500 clients spread across 68 countries. The week was highlighted by a white-glove sale for the historic Bourbon-Parma family collection, as 100 lots all found buyers with many selling for high multiples of pre-sale expectations – setting a new record for an auction of Royal Jewels at $53.1 million. As part of the collection, Queen Marie Antoinette’s Pearl sold for $36.2 million, achieving a new world auction record for a natural pearl.

Sotheby’s Watches sale saw the most valuable wristwatch ever sold in Sotheby’s history, as “The Asprey” soared to $3.9 million – also breaking the record for a Patek Philippe Reference 2499.