Given in recognition of a lifetime’s work, RIBA Royal Gold Medal is given to a person or group of people who have had a significant influence ‘either directly or indirectly on the advancement of architecture’

Given in recognition of a lifetime’s work, the Royal Gold Medal is approved personally by Her Majesty The Queen and is given to a person or group of people who have had a significant influence ‘either directly or indirectly on the advancement of architecture’. 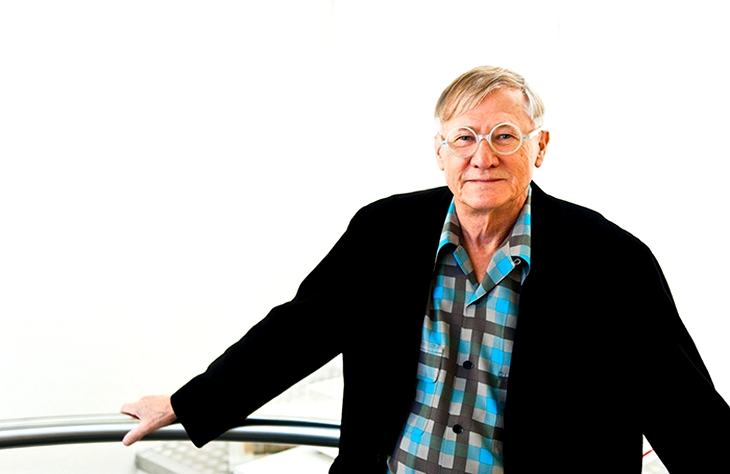 Architect of the Eden Project and leading proponent of the British “high tech” movement, Sir Nicholas Grimshaw has been named as the 2019 recipient of the RIBA gold medal, the UK’s highest accolade for architecture.

Grimshaw made his name with a series of lightweight industrial buildings in the 1970s and 80s, developing a style that celebrated the way these utilitarian sheds were made. It was an approach that he went on to deploy at ever more theatrical scale in grand infrastructure projects, from the serpentine glass vaults of Waterloo station’s international terminal in 1993 to the soaring steel trusses of Zurich airport in 2004. But this master of Meccano has always defied being labelled.

“I’ve never like the term ‘hi-tech’,” he told the Guardian following the medal announcement. “It sounds like a stylistic movement. We see ourselves as very solidly grounded in Paxton and Brunel, with a clear line of development. We’re not just picking up a fashion here and there.”

For the last 50 years, Grimshaw, now 78, has been the most single-minded of the hi-tech architects, pushing the functionalist dream to the last. While Norman Foster, Richard Rogers and Michael and Patty Hopkins have variously dabbled with historical allusions or experimented with form, Grimshaw’s architectural language has remained fundamentally the same since the beginning, wedded to the purity of the girder and the appeal of naked aluminium. His doggedness was perhaps an obstacle to recognition: his aforementioned peers all received the RIBA gold medal in the 80s and 90s. He’s had to wait.

Architect Simon Allford, who nominated Grimshaw for the medal, worked in his office in the early 80s. “The focus then as now was on how buildings should be designed from the outset to respond for the need to change over time in use,” he said. “Nick always understood that the life of a building begins once the architect’s engagement ends.” In a fitting story of adaptation, Grimshaw’s firm is currently converting his breakthrough 1976 factory for Herman Miller into a design school for Bath Spa University. “We’ve had an agonising time with the heritage people,” said Grimshaw. “‘Aren’t you wrecking your own building?’ they asked, without realising it was always designed to be adapted.”

Born in Hove, East Sussex, to an aircraft engineer father and art teacher mother, Grimshaw studied at Edinburgh College of Art and the Architectural Association in London, where he was taught by experimental thinkers Peter Cook and Cedric Price. He embarked on a 15-year partnership with Terry Farrell in 1965, which saw them build the groundbreaking apartment tower of 125 Park Road on the corner of Regent’s Park, London, where Grimshaw lived for six years.

Clad in streamlined corrugated aluminium panels, with ribbons of factory-made bus windows, it borrowed from the principles of commercial office floor plans, with lifts at the centre surrounded by open-plan living space, allowing more than 70 different apartment layouts. It was a dream of factory-made, co-ownership housing that never progressed beyond this one-off. “We’ve barely moved on since then,” said Grimshaw. “There’s been no progress on housing in this country since we retreated to the Thatcherite bungalow world.”

As Farrell began to embrace postmodernism – an idea that remains anathema to Grimshaw – the two parted ways and Grimshaw set up his own firm in 1980, pursuing his vision for buildings as akin to boats, trains and planes. “I see the practice of architecture as similar to boat-building,” he said. “It’s about materials and structures doing real things, as opposed to decorative things. You won’t find any redundant members on a yacht: every screw has had its load calculated.”

Grimshaw’s Camden Town Sainsbury’s, built in 1988, stands like a great chunk of machinery among the Georgian terraced streets, flanked by a row of canal-side homes that have the look of detachable space pods. His Berlin Stock Exchange, built a decade later, stands on a row of robotic-looking legs, as if ready to walk off at a moment’s notice. Like a diver’s watch on a City banker, his architecture is often made to look as if every element is performing a heroic technical function, even if that may not always strictly be the case.

In the UK, Grimshaw is best known as the architect of the Eden Project, the Millennium Commission extravaganza that saw a redundant Cornish clay pit transformed into a sci-fi scene of inflatable “biomes”, housing 5,000 varieties of plant life. It remains a thrilling sight today, the cluster of geodesic domes bubbling out of the valley like a futuristic fungus. He used the same technique of ETFE plastic pillows on the International Space Centre in Leicester in 2001, enveloping a pair of rockets in a mysterious translucent cocoon. But the project of which he remains most proud is the now-redundant international terminal at Waterloo station, London, a great snake of blue steel and glass that leaps over the tracks in a shimmering 400-metre long vault.

“It seems run-of-the-mill now,” he said, “but it was a huge emotional thrill at the time, to be connected to Europe like this. I suppose it’s particularly ironic now, given the absolutely crazy decision to leave the EU.”

He thinks there is still “something heroic” about railway stations that airports don’t have, “with the excitement of departure and the exhilaration of arrival”. Passengers using some of his structures haven’t always agreed. Grimshaw’s Newport station in Wales, designed with Atkins, was nominated for the Carbuncle Cup in 2011, its curvaceous silver bulk accused of “clunkiness” and “leaden banality”. The following year he won the hated gong for his Cutty Sark conservation project, which trapped the precious vessel in a clumsy glass and steel carapace. It was described by the judges as putting the “ship in a throttle”, “tragically defiling the very thing it set out to save”.

It may not be surprising that some projects slip through the net of this corporate giant, given Grimshaw’s practice now employs 600 and has offices in Los Angeles, New York, London, Doha, Dubai, Kuala Lumpur, Melbourne and Sydney.

The practice’s latest addition to London thankfully shows them working at the top of their game: the platforms of the central Crossrail stations are elegant factory-made essays in utility, efficiency and delight, as Grimshaw’s best work has always striven to be.