Floating Cinema by Ole Scheeren.
Constructed in the most unlikely of places: right on top of the water 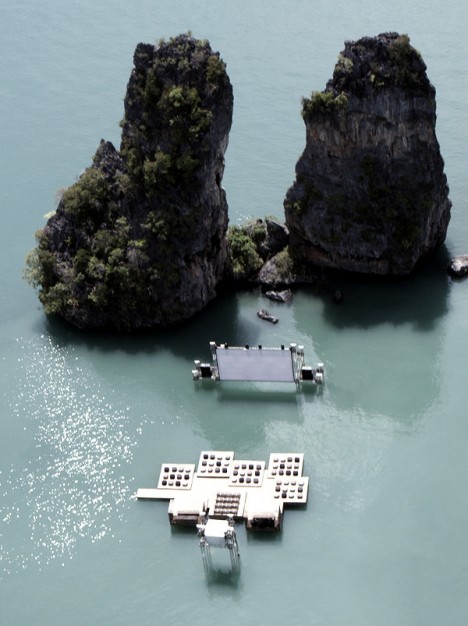 Beijing-based architect Ole Scheeren constructed an outdoor temporary floating cinema designed to be the stage for the final night of the “Film on the Rocks Yao Noi” new film festival in Thailand (9th- 12th March 2012). The floating auditorium was built in the most unlikely of places: in a lagoon with calm waters surrounded by towering island rocks. Two smaller rocks stood like teeth out of the water, forming a porous enclosure, inscribing an almost circular space.

The thought of watching films here seemed surprising, according to arhchitect Ole Scheeren: “A screen, nestled somewhere between the rocks. And the audience… floating. Hovering above the sea, somewhere in the middle of this incredible space of the lagoon, focused on the moving images across the water. A landscape of pieces playfully joined together. A sense of temporality, randomness. Almost like drift wood. Or maybe something more architectural. Modular pieces, loosely assembled, like a group of little islands. A congregation of rafts as an auditorium.”

Crafted out of recycled materials, The Archipelago Cinema has a modular flexible construction  that allows future reuse.