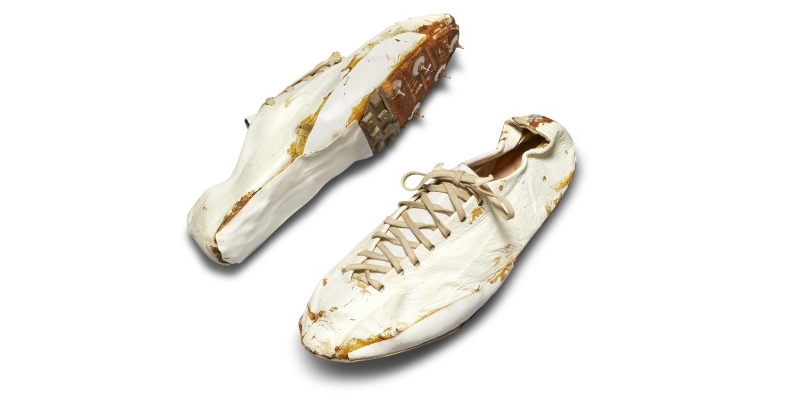 This article titled “£450k for trainers: why vintage fashion is the new smart investment” was written by Alice Fisher, for The Observer on Sunday 28th June 2020 06.30 UTC

If you’ve ever complained about the cost of new trainers, consider this. On Friday night, a pair of running shoes sold $162,500 (£132,000) at auction at Sotheby’s in New York. Though these unique spike shoes were handmade in the early 1970s by Bill Bowerman, co-founder of Nike, they’re not even the most expensive trainers in the world. Those were sold at Sotheby’s last month: a pair of Michael Jordan’s Air Jordan 1s from 1985 fetched $560,000 .

These sales are part of a growing trend for traditional auction houses to sell fashion and streetwear. Many now sell skateboards as well as Picassos, and are setting up handbag departments alongside those for antiquities and old masters.

According to data analysts GlobalData, the secondhand market for luxury goods is set to be worth $51bn by 2023, compared with $24bn in 2018, and while plenty of this will be through dedicated fashion resale websites, venerable auction houses are getting in on the act.

Bonhams, founded 1793, holds its inaugural handbag sale in July. The lots include a Perspex handbag designed by Virgil Abloh for Louis Vuitton in 2018 and a 2019 Hermès Birkin. Meg Randell is head of the handbag department, set up at Bonhams this year, and she says the luxury secondhand market grew four times faster than the primary market this year. “Pre-loved luxury goods are huge in all sectors from auction houses to online,” she says.

According to Randell, secondhand sales are driven by two factors. “Some bidders want items you can’t get new. For example, you can’t go into a Hermès boutique and buy a Birkin. Hermès doesn’t run a waiting list anymore, they only make them for friends of the fashion house. So there’s a huge resale market.

“For others, they’re looking for cheaper bags on the secondary market or bags from the last 20 years. At the moment, you see a lot of influencers on Instagram with Fendi Baguettes – the It-bag of 2000 – so there’s a big market for those.”

A report by Art Market Research published last week said that in 2019, 3,700 designer handbags sold for £26.4m at auctions around the world. Birkin handbags increased in price by 42% on average last year, while the average value of Hermès Kelly bags have risen 129% since 2010.

While Christie’s and Sotheby’s also have established fashion and handbag departments, the latter has cornered the market on trainers since 2019. Their first auctions broke world records. Brahm Wachter, director of e-commerce Development, says Sotheby’s identified that the sneaker resale market was expected to grow to $6bn by 2025, and also noted how many collectors were out there. “We wanted to try something unique, but stay true to our brand with our first sneaker auction,” he says. “In partnership with online streetwear platform Stadium Goods, we sold 100 of the rarest sneakers ever released, and at the time broke a record for the highest price, selling the 1972 Nike Moon Shoe for over $400,000.”

Wachter says that trainers haven’t caused culture shock at Sotheby’s. In fact, two pairs are on view for sale at their New York headquarters – a pair of “What the Dunk” skate shoes with a starting price of $12,500 and a pair of Air Force 1s “Lux Anaconda”, which start at $2,500.

Trainer collectors certainly have a reputation for obsession. Jordan Geller is the American collector who sold the two record-breaking pairs of trainers at Sotheby’s recently. He made the Guinness Book of Records in 2013 for having the world’s largest collection of Nikes, and at one point owned more than 15,000 pairs. Currently he has about 300.

“It’s difficult for me to put a value on my collection as I consider them priceless,” he says.

Like all serious sneaker collectors, Geller identifies as passionate and obsessive. “I am certainly both. Collectors are always on the hunt for that next special pair. We are nostalgic, and sneakers bring back good memories for us.” He thinks it’s great that auction houses are getting into trainers. “I’ve always viewed sneakers as art, and it’s great to see other people feel the same way.”

Wachter believes trainers are culturally important. “Sneakers cover a broad range of our cultural history. From sports and art to film and music, sneakers are often a big (and popular) part of the story. All it takes is watching Back to the Future II, with Marty McFly lacing up his Nike MAGs, to see the importance that these items ,and Nike, have had on our collective culture.”

He also notes that although the first Sotheby’s skateboard sale was held only last year, skateboards decorated by artists such as George Kondo and KAWS had previously gone under the hammer – just at contemporary art auctions.

Collaborations between designers and artists is one of the modern phenomena that has meant fashion is now viewed as a collectible commodity, but more fundamental changes in the audience for fashion have come through the internet and the access it provides to blogs, influencers and Instagram.

“The landscape of fashion has completely changed in the last two decades,” says Oriole Cullen, a contemporary fashion and textiles curator at the V&A, the London museum with the largest fashion archive in the world. “The history, theory and study of fashion has become more accessible. There used to be gatekeepers who decided what fashion could be and what was important but that’s all gone.

“The idea of bidding on modern fashion has come from brands such as the streetwear label Supreme, which really sparked the trend for buying limited editions. Clever brands limit production, which feeds demand. Now auction houses hold online sales, anyone can bid from anywhere around the world. It’s a global conversation.”

As Cullen says, if there’s demand then there’s going to be a sale. Though she cautions that not all buys will hold their value. “Some of these products use experimental fabrics which do degrade – we’ve found that with our collections.”

Although the current boom in auction house and online sales causes her some professional disappointments as so many bidders are now competing for items the V&A might want, Cullen is all in favour of the democratisation of fashion.”Before the internet, many clothes would be worn and then lost for ever. Now if you want to look for dresses made by, say, Balenciaga in the 1950s, there’s a chance you’ll find them. That’s kind of magical.”

Fashion under the hammer

Trainers: Michael Jordan’s worn, autographed Nike Air Jordan 1s from 1985 sold for $560,000 at Sotheby’s in May 2020. The shoes had a reserve price of $150,000 but the sale coincided with the smash hit documentary series about Jordan, which had 23.8m viewers worldwide on Netflix.

Skateboards: Supreme is the world’s most sought-after skateboard brand at auction. A collection of 248 skateboards was sold at Sotheby’s for $800,00 in 2019. Christie’s auction dedicated to Supreme streetwear, also in 2019, featured a Supreme x Louis Vuitton skateboard that went for $30,000.