Exports of Cognac have continued their steady rise. Cognac is at the top of the major appellations. 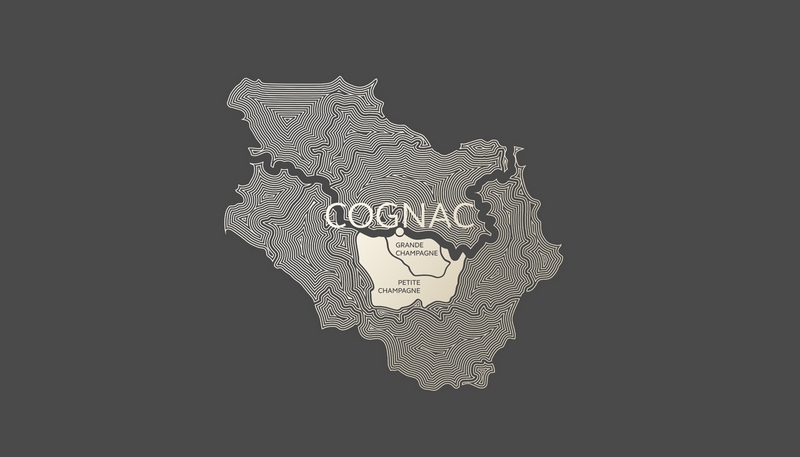 For the fourth straight year, exports of Cognac have continued their steady rise, with an increase of 8.2% in volume and 5.4% in value1. The previous record of cognac bottles shipped (200 million) has been surpassed, with 205.9 million bottles shipped between August 2017 and July 2018. With 3.2 billion euros (roughly 300 billion
dollars) in revenue, Cognac contributes significantly to France’s trade surplus in the wines and spirits sector, accounting for nearly a quarter of the total value of French wine and spirits exports and placing Cognac at the top of the major appellations. 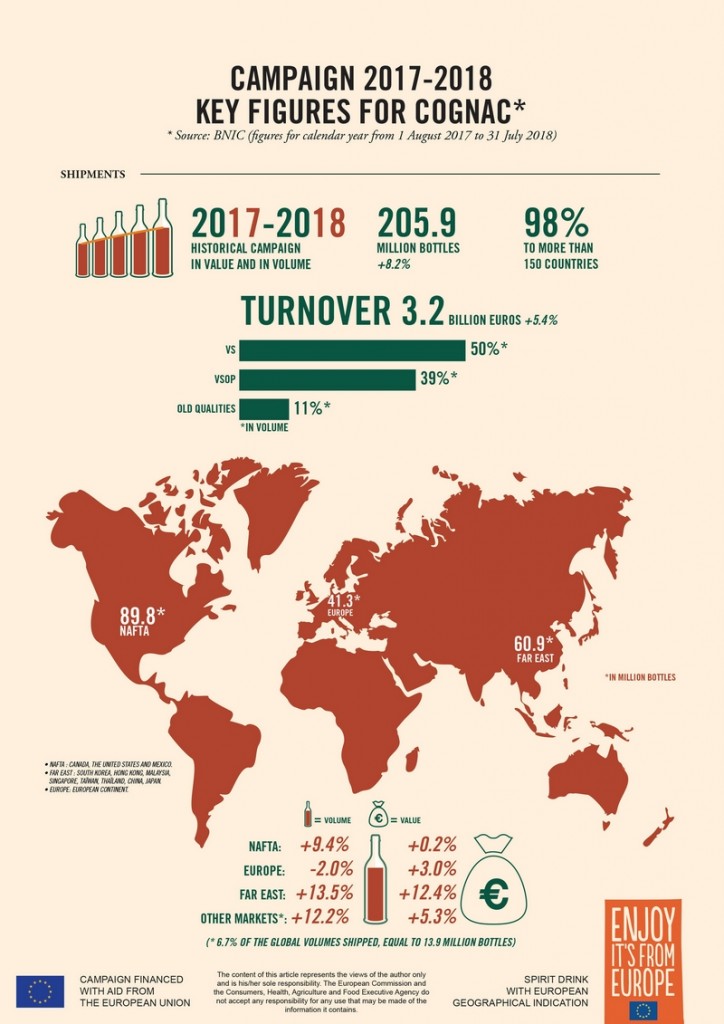 Positive results in all major markets

Cognac consolidated its position in the NAFTA zone with 89.8 million bottles shipped. This translates to an increase of 9.4% in volume and 0.2% in value, in the 9th consecutive year of growth2. The United States remains the leading market, with 86.5 million bottles shipped during the period. “The brown spirits category is
growing in the US market. The historical presence of cognac and the constant investment by the Cognac houses in this market have reinforced the performance of cognac in the U.S.,” explains Patrick Raguenaud, President of the Bureau National Interprofessionnel du Cognac (BNIC).

The East Asian cognac market continues to grow, with 60.9 million bottles shipped (and increase of 13.5% in volume and 12.4% in value)3. China is driving growth in this zone, with nearly 26.2 million bottles shipped. For Patrick Raguenaud, “these good results confirm China’s continued appetite for Cognac, even with transitions currently taking place in that market.”

Shipments to continental Europe remain stable with a slight loss of 2.0% in volume but a rise of 3% in value, for a total shipment of more than 41.3 million bottles. These results are due to a small decrease in exports to western and northern Europe and growth in Russia and Latvia. “Particularly in the United Kingdom, our largest European market, shipments remain stable, despite the uncertainties of Brexit,” says Patrick Raguenaud. 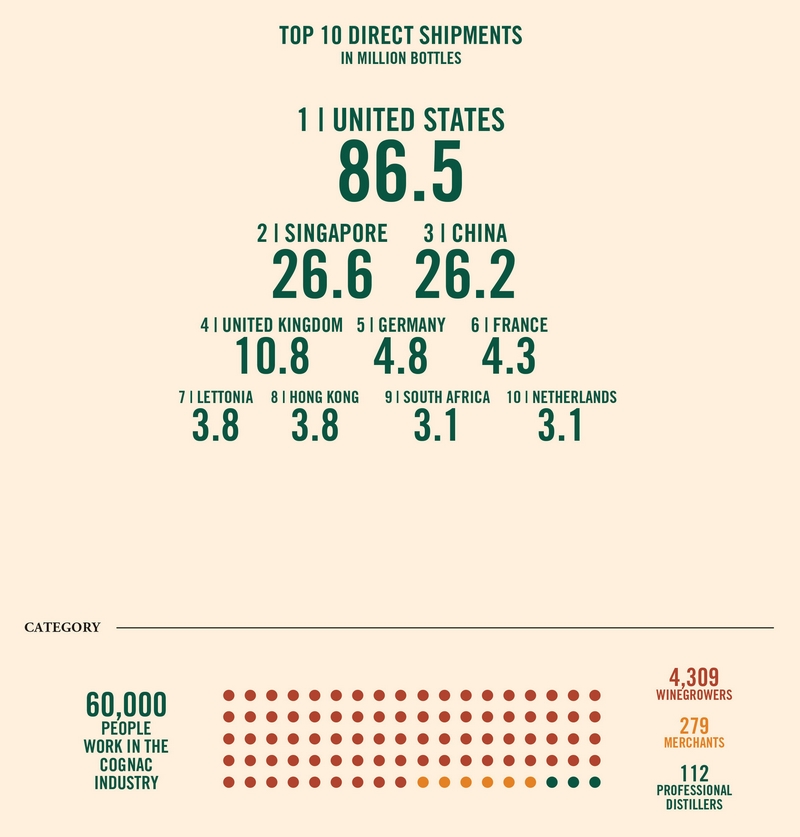 Significant potential for development in the rest of the world

Increased exports also continue in other areas, with strong potential for Cognac in countries such as South Africa, Vietnam, Oceania and the Caribbean4. Exports to these markets rose by 12.2% in volume and 5.3% in value. All together, these promising markets represent more than 6.7% of total exports, or nearly 13.9 million bottles.

According to the Fédération des Exportateurs de Vins et Spiritueux de France (Federation of Exporters of Wines and Spirits of France) and the Fédération Française des Spiritueux (French Federation of Spirits), 2017 saw French spirits exports reach new records and break the € 4 billion mark, for a total of 437 million liters (an
increase of 2.4%). Cognac, accounting for 70% of the value of spirits exports, gave a strong boost to the overall value. In addition, Cognac now represents nearly a quarter of the total value of all French wine and spirits exports. 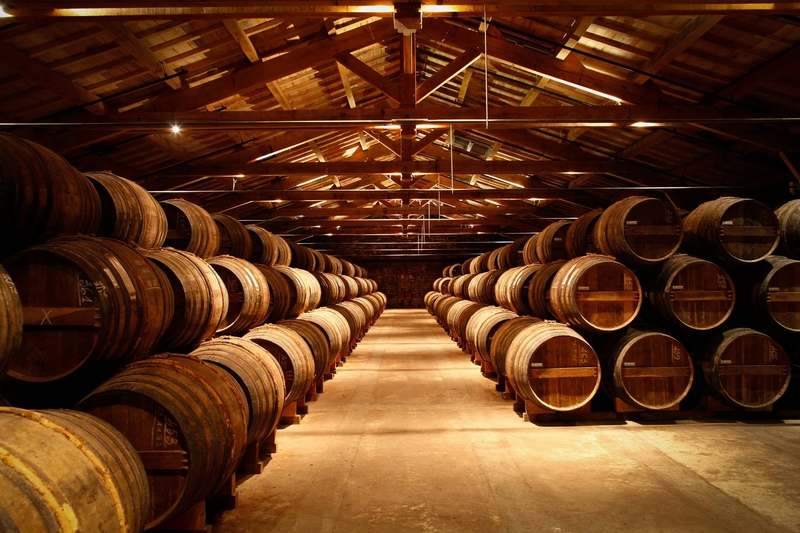 Representing 50% of total volume, the V.S., V.S.O.P. and older categories—including Napoléon, X.O. and Horsd’Âge—continue to play a prominent role in Cognac’s strong performances. The success of V.S. (minimum 2years aging) cognac continues to be driven by the North American market–which accounts for half of all cognac
shipments—growing in volume by 6% and in value by 4.1%.

Representing a little less than 40% of the production, V.S.O.P. (minimum 4 years aging) shipments increasedby 10% in volume and 2.1% in value. Napoléon (minimum 6 years aging), X.O. and Hors d’Âge (minimum 10years aging, respectively) are also experiencing significant growth with a rise of 12.4% in volume and 10.3% invalue, thanks to strong results in East Asia.

According to Patrick Raguenaud, “the good momentum we are experiencing today in these three quality-designated categories can be explained by cognac’s strength in all markets, with varied consumption patterns.” 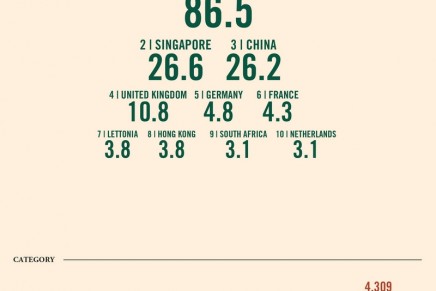 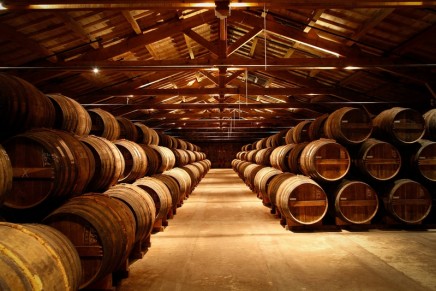 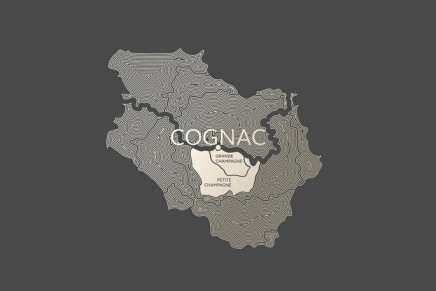 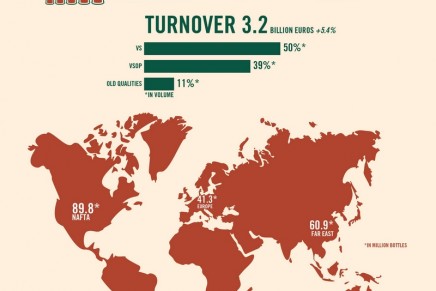