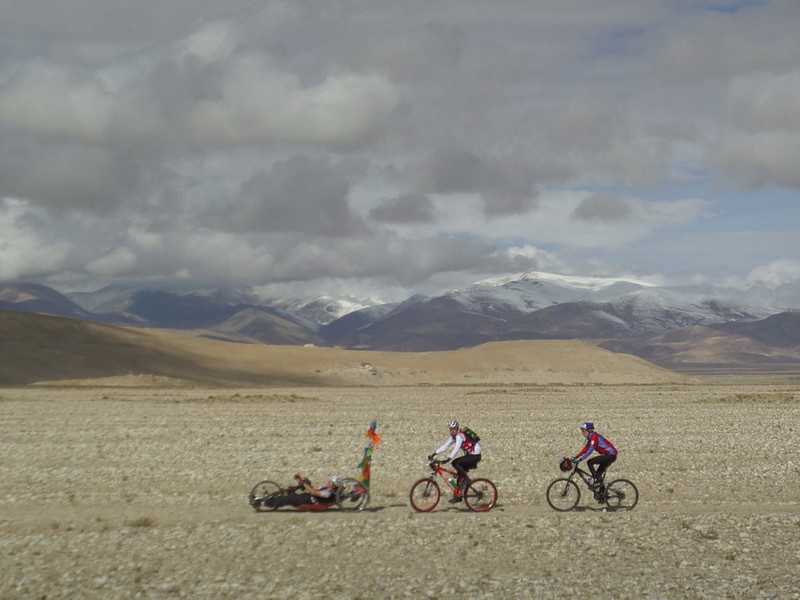 This article titled “10 of the most inspiring contemporary female adventurers” was written by Rosemary J Brown, for theguardian.com on Wednesday 30th March 2016 10.04 UTC

Journalist Nellie Bly jumped off the page at me as I was researching Victorian female travellers. The more I got to know her, the more I was intrigued by this fearless character who wouldn’t take no for an answer. Her crusades in print brought reforms in women’s asylums, orphanages, sweatshops and prisons.

The story that brought Bly the most acclaim was circling the globe in 72 days in 1890, beating the fictitious record in Jules Verne’s Around the World in 80 Days. One hundred and twenty five years later, I followed in her footsteps.

We both travelled alone with one small bag. She went by ocean liner and train. I flew. She journeyed through the Victorian age. I travelled through the information age, blogging along the way. Tracing Bly’s race around the planet expanded my own world of adventure, and I became a fellow of the Royal Geographical Society. The UK and Ireland have produced many bold female travellers. My goal is to put them “on the map” as role models encouraging us to travel out of our comfort zones.

Just start; that’s the best way to get going on an adventure, according to Anna McNuff who urges people to leave their fears at home and get outside. She would know. In 2013, she cycled seven months and 11,000 miles on a pink bike taking in every state in the US. Last year she ran 1,911 miles along New Zealand’s Te Araroa trail. McNuff calls them her mega-adventures, but she’s also a fan of mini-adventures, such as running along Hadrian’s Wall, rollerblading 100 miles around Amsterdam, and midweek camping escapades around London. She recently walked out of her back gate with a bivvy bag, backpack, and an open European itinerary to be decided by votes from her followers on social media. McNuff is also on a mission to get children outdoors and exploring. Through her endurance challenges, she’s raised awareness, as well as more than £20,000 for the charities Right to Play and The Outward Bound Trust. “I’m inspired by people who dive so deep into their personal well of self-belief that they achieve things which most would deem impossible,” she says.
• annamcnuff.com

Gosling is a time traveller: she fuses all the things she loves best – history, exercise and inspiring stories – into momentous challenges that reignite the past. She had never been on an expedition when she set off in August 2015 to travel 5,000 miles on foot and bicycle along the 15 countries bordering the iron curtain separating western Europe from the former Soviet Union. Postwar history came alive for her, an NHS physiotherapist, who was four-years-old when the Berlin Wall came down. Gosling will be closer to home, but further back in history, with a 240-mile Tudor-themed run from Bosworth Field, site of the last battle of the War of the Roses, to Westminster Abbey, final resting place of Elizabeth I. She’ll be running 12-15 miles a day over two weeks (she started 26 March) – and she wants you to join her along the way. Follow the route on Justine’s blog.
• justinegosling.com

Kirk’s quest is to get people to live more adventurously. She has walked across Nicaragua, searched for camels in China’s Taklamakan desert, so-called Desert of Death, discovered rock paintings in Lesotho and was skipper of the first female crew to row non-stop around Britain, in a punishing 2,101-mile, 51-day voyage. An expert expedition leader, she has managed remote trips for outdoor survival gurus Ray Mears and Bear Grylls. She launched Explorers Connect, a social enterprise connecting people to adventures in the UK and overseas in 2009. It’s now a community of 25,000 from total beginners to experienced explorers who can link up with adventures, team-mates and adventure industry jobs. Currently, she’s establishing Britain’s first national day of adventure, Wild Night Out, to help disadvantaged kids get outdoors. “I’ve seen adventure change people’s lives, by giving inspiration and building confidence, creativity and a reconnection with nature,” she says.

Engelkamp trekked 1,000 miles around the circumference of Wales with a headstrong donkey named Chico. The pair walked for nearly six months in 2013 starting and ending in Engelkamp’s hometown of Aberystwyth. Although the inspiration for her journey came from the fact that Wales had recently become the first country in the world encircled by a continuous footpath, she discovered, a little too late, that her donkey couldn’t manage the 964 stiles and 783 kissing gates ahead of them. With no set course and no itinerary, they travelled as close to the coast and borders as they could; mainly wild camping, and sometimes sleeping in tipis, yurts and hay barns. Engelkamp embarked on a dream and returned with a plan to capture the journey in a book and film through crowdfunding. Eight hundred and twenty nine backers pledged £35,000 to make it happen. Seaside Donkey recounts the story of Hannah and Chico’s odyssey in print and DVD. Engelkamp says: “Walking with a donkey was only strange by being about 60 years late. We were walking on green lanes and drove roads made for animal traffic – get out of your car and that history is still there, and easily revived.”
• hannahme.com

Former English and drama teacher Hill-Murphy has travelled to inhospitable places to recreate the journeys of daring female adventurers from the past. In tracking four valiant women who left inhibition at home and headed into the unknown, she pays tribute to their spirit and achievements. She has followed in the footsteps of Victorian explorers Isabella Bird, who travelled by yak across the Digar-La Pass in Ladakh, India, and Mary Kingsley – who pioneered the route to the summit of the volcano Mount Cameroon; and also Kate Marsden, who trudged from Moscow to Siberia in search of a cure for leprosy (a doctor had tipped her off about the curative properties of a herb there). Hill-Murphy also braved piranha-infested waters in a canoe to replicate the 1769 expedition of Isabel Godin, the only survivor of a 42-person, 3,000-mile expedition along the Amazon. Hill-Murphy’s travels and those of her heroines come to life in her recent book Adventuresses. She’s now writing a biography of Kate Marsden.
• jackihill-murphy.co.uk

A fall on a rock-climbing expedition in 1992 almost changed everything for Karen Darke. She thought she would rather be dead than paralysed; that her adventures were over. But with friends, creativity and perseverance, she has found that most things are possible, including becoming a Paralympics silver medallist and an irrepressible traveller. Among other astonishing feats, she has crossed Greenland’s ice cap sitting on skis, using her arms to propel her; kayaked from Canada to Alaska over three months, and handcycled over the Himalayas. She denies being an adrenalin junkie, but admits to an addiction to the outdoors. Now she’s on the Road to Rio, training with the British paracycling team for the 2016 Paralympics in Brazil. Along the way, she’s squeezing in adventures on wheels, water and snow. Darke is the author of If You Fall … and Boundless: An adventure beyond limits. She explains: “I think adventures can be anything – small or large – in your garden or on the other side of the world. It’s all about entering into the unknown and doing something that seems to some degree unachievable.”
• karendarke.com

Outen set out from Tower Bridge in April 2011 on her global expedition London2London via the World. Her body was her only engine. Four and a half years and 25,000 miles later she had rowed, cycled and kayaked her way around the northern hemisphere. Nothing stopped her; not even hurricanes, typhoons or loneliness. Outen’s first major expedition was a solo row across the Indian Ocean in 2009, where she set records as the first woman and youngest person to accomplish such a feat. She has captured her epic expeditions in the books A Dip in the Ocean: Rowing Solo Across the Indian Ocean, and Dare to Do – chronicling her world journey and due out in November 2016. She was named Adventurer of the Year at the National Adventure Awards on 16 March in Glasgow.
• sarahouten.com

She’s a runner, skydiver, bungee jumper, climber, cyclist and world traveller … and a former banker. In 2013 she swapped the rat race for marathons and other gruelling challenges and is currently training for the world’s toughest footrace, the 200-mile Marathon des Sables across the Sahara. Now an adventure aficionado, Williams’ new vocation is to motivate and inspire women and girls to challenge themselves. She’s the founder and host of the Tough Girl podcast, weekly interviews where female adventurers share their journeys first-hand. From gold medallists to grandmothers, Williams’ podcasts include celebrated polar explorers Ann Daniels and Felicity Aston, and dozens of other female adventurers.
• toughgirlchallenges.com

Timmis is a runner, cyclist and climber, she was honoured in the 2015 National Adventure Awards for physical endeavour. At 32, she’s already tackled some of the world’s toughest challenges, but takes it all in her stride. Last May, Timmis discarded her running shoes and rollerskated across the Netherlands in seven days with her friend Emily Pitts. Thanks to couchsurfing and imaginative budgeting, they only spent £245 each – proving that adventures can be created on a shoestring.
• emmatimmis.com

And one travel great who spans the 20th and 21st centuries …

A travel legend, Murphy has always blazed her own trails. Now in her 80s, she continues to journey around the world as she has for more than five decades – usually alone and mostly on a bicycle. She is Ireland’s most prolific travel writer and is best known for her 1965 book Full Tilt: Ireland to India with a Bicycle. Another 20 titles have followed, most recently Between River and Sea: Encounters in Israel and Palestine (2015). She travels with the bare minimum, counting on the hospitality of local people. Her daughter Rachel and three grand-daughters live in Italy and join Murphy on her journeys when possible. The documentary Who is Dervla Murphy? is released on 23 April. “Choose your country, use guidebooks to identify the areas most frequented by foreigners – and then go in the opposite direction,” says Murphy.
• dervlamurphy.com