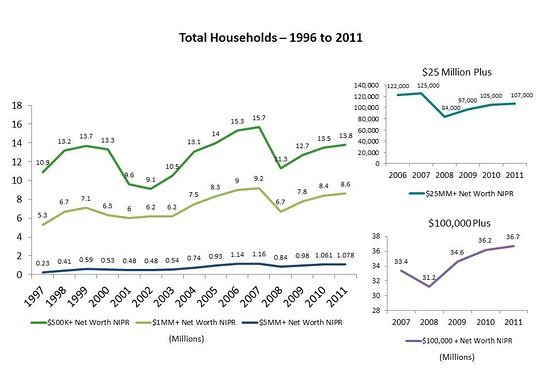 The number of millionaire households in the U.S. has increased for the third consecutive year, but remains below the pre-recession high of 9.2 million in 2007, according to the 2012 Affluent Market Insights released by Millionaire Corner.

The prolonged stock market rally has augmented portfolios and boosted confidence, but it has not completely alleviated investors’ concerns about their personal financial situation and the overall economy.

Mass Affluent investors – those with a net worth of $100,000 up to $1 million – rank retirement security as their top personal financial concern. Sixty-three percent say they worry about having enough money set aside for retirement, and fewer than half feel they have a well-defined strategy for investing their retirement savings or are “very satisfied” with returns on their retirement plan investments.

Retirement concerns are followed closely by worries about their current financial position among the Mass  Affluent. Sixty-two percent are worried about maintaining their financial status quo. The financial consequences of a medical emergency, as well as the financial security of future generations, worry close to 60 percent of the Mass Affluent.