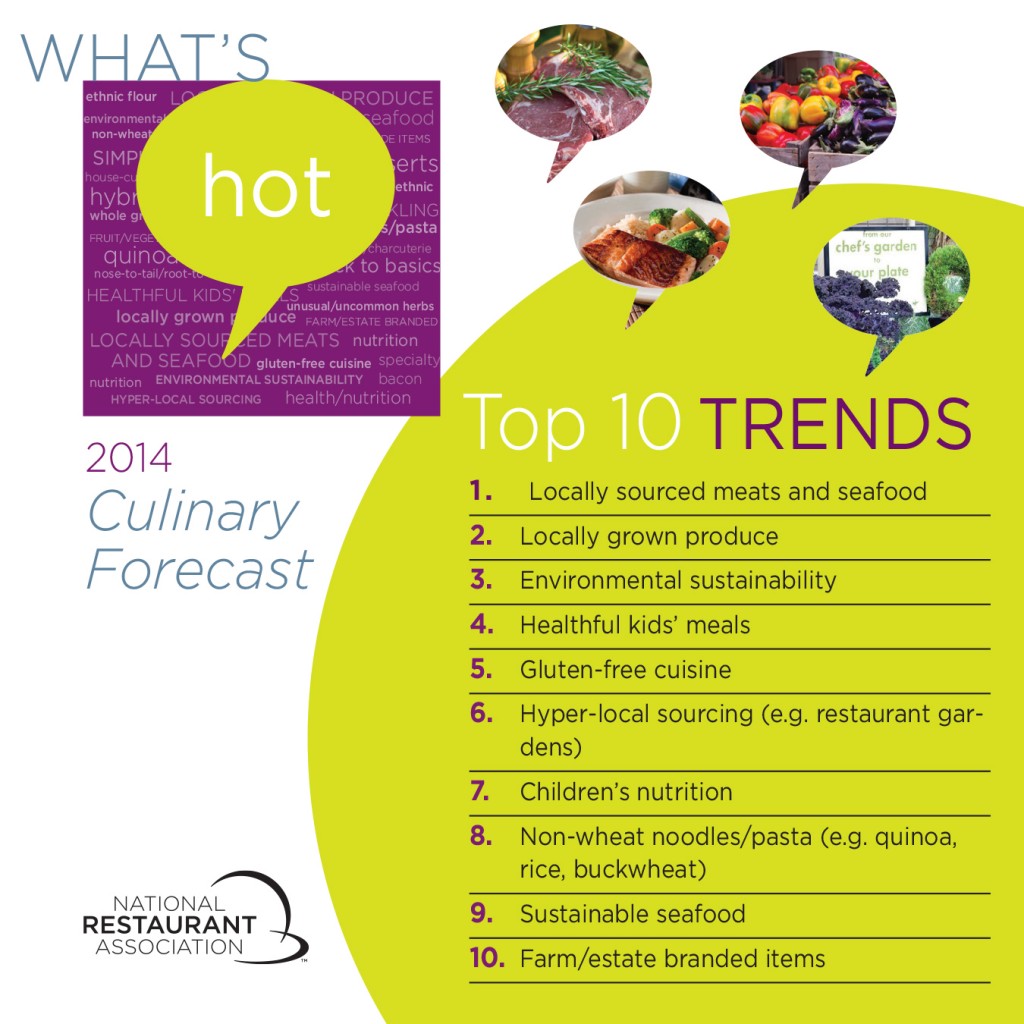 A recent National Restaurant Association survey of nearly 1,300 chefs and members of the American Culinary Federation have identified the top ten food trends for 2014 as part of a What’s Hot culinary forecast for 2014. This is an indicator of what individuals are likely to see on restaurant menus this year. Among the top ten forecasted menu trends include locally sourced meats and seafood, gluten-free cuisine and sustainable seafood.

The top restaurant menus trends for 2014 focus on local sourcing, environmental sustainability and nutrition – children’s nutrition in particular. These trends have been gaining momentum for several years, indicating that these wider themes influence the culinary scene.

“Today’s consumers are more interested than ever in what they eat and where their food comes from, and that is reflected in our menu trends research. True trends – as opposed to temporary fads – show the evolution of the wider shifts of our modern society over time, and focus on the provenance of various food and beverage items, unique aspects of how they are prepared and presented, as well as the dietary profiles of those meals,” explained Hudson Riehle, senior vice president of the National Restaurant Association’s research and knowledge group.

When asked which current food trend will be the hottest menu trends 10 years from now, environmental sustainability topped the list, followed by local
sourcing, health-nutrition, children’s nutrition and gluten-free cuisine.

The five items that gained most in trendiness since last year in the annual survey were nose-to-tail/root-to-stalk cooking, pickling, ramen, dark greens, and Southeast Asian cuisine. The five items with the largest drop in “hot trend” rating were Greek yogurt, sweet potato fries, new cuts of meat, grass-fed beef, and organic coffee.

Also included in the What’s Hot in 2014 survey were questions about other trends. Nearly six out of 10 (59 percent) of the chefs said they always make efforts  to adjust dishes and recipes to be more healthful, while one-third (33 percent) said they cook with nutrition in mind, but that not all recipes are easily  adjusted.