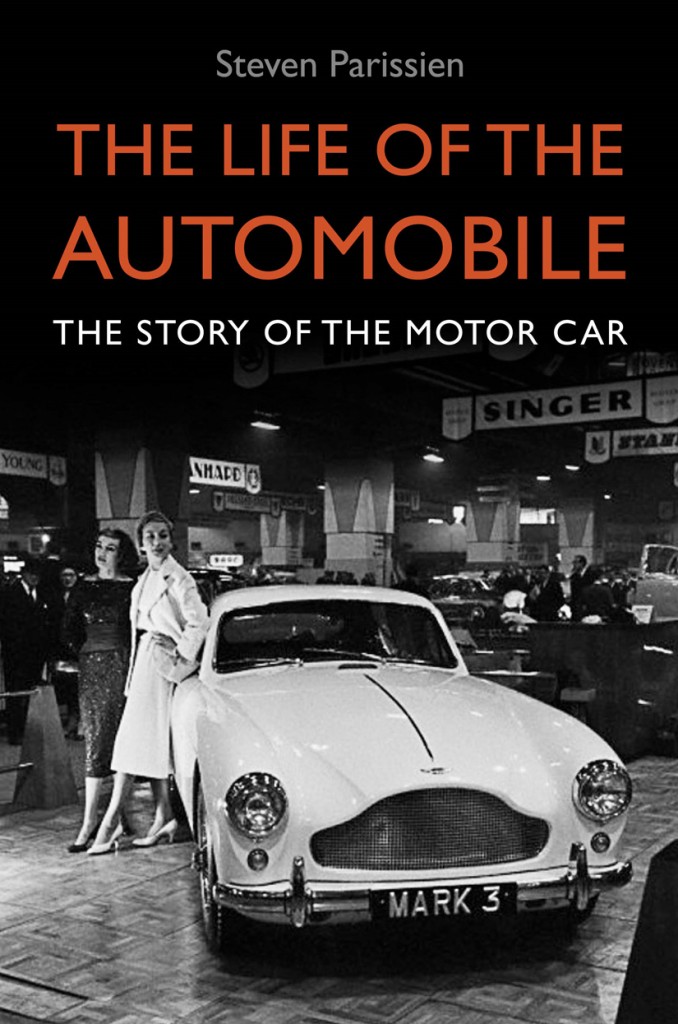 This article titled “The Life of the Automobile by Steven Parissien and Auto Biography by Mark Wallington – reviews” was written by Joe Moran, for The Guardian on Wednesday 8th January 2014 09.30 UTC

Writing in the 1950s, the French cultural critic Roland Barthes argued that cars were “almost the exact equivalent of gothic cathedrals: I mean the supreme creation of an era, conceived with passion by unknown artists, and consumed in image if not in usage by a whole population which appropriates them purely as a magical object”. Those of us who congregate for the Top Gear liturgy on irregular Sundays have noticed that church attendance has dwindled recently, but the car remains an object that invites worship. As well as being loaded with the symbolic baggage of money, status and sexual competitiveness, it is a pretext for grown men (and occasionally women) to engage in the unembarrassed sharing of esoteric knowledge and aesthetic delight. And yet, like other religions, car worship increasingly provokes anger and resentment from non-believers. In his epic anti-car poem Autogeddon, Heathcote Williams described streets as “open sewers of the car cult”. At Reclaim the Streets events in the 1990s, protesters carried mock road signs with the slogans “Fuck The Car” and “Cars Come Too Fast”. One way or another, people get worked up about cars.

The car is thus an object ripe for cultural and historical analysis, and here are two books that attempt this in different ways. Steven Parissien’s The Life of the Automobile is a global history of the motor car, from Benz to biofuels. It begins in earnest in 1891 with the French engineer Émile Levassor effectively inventing the modern automobile by moving the engine to the front and adding a front-mounted radiator, crankshaft, clutch pedal and gearstick. The book reminds us that Henry Ford created not only the mass market in automobiles but also the market in car accessories, for his Model T was so lacking in refinements that the Sears, Roebuck catalogue included over 5000 items that could be attached to it. It was Alfred P Sloan, the president of General Motors, who introduced the notion of planned obsolescence and of gradually trading up from entry-level Chevrolet to top-of-the-range Cadillac. Parissien takes us through the golden age of the car in the 1950s and 60s, when models such as the Citroën DS, the 1959 Cadillac, the E-Type Jaguar and James Bond’s beloved Aston Martin DB5 combined beauty and functionality. Then, as the car came to be pilloried for causing congestion and pollution, the automobile industry responded by forging new markets in southern Asia and China and experimenting with alternative fuels and hybrids that mostly sought to eke out the diminishing reserves of oil. But it also responded with the single-fingered salute that is the gas-guzzling SUV, the global market for which continues to grow, undaunted by either austerity or ecopolitics.

Parissien’s is mostly a work of synthesis, culled from secondary sources, but some overarching themes present themselves. You discover how much the car (like so much else) relied on world wars as mothers of technological invention and opportunities for global branding. The Rolls-Royce Silver Ghost, for instance, established itself as the epitome of luxury in the first world war when it was used to chauffeur generals to the front, and TE Lawrence granted it perfect product placement in Seven Pillars of Wisdom, describing it as “more valuable than rubies”. During the second world war, the first Volkswagen Beetles were designed with a high clearance so they could be deployed on the Russian front. Although mainly an account of the car industry, Parissien’s book offers some interesting sidelights in social history. We learn that Vermont was a remote backwater until its Bureau of Publicity began marketing the state to pioneer motorists for leaf-peeping in the fall and skiing in winter, and that in 1931 Barbara Cartland organised a race for MG Midgets at Brooklands to demonstrate the skilfulness of women drivers.

Parissien’s heroes are the resourceful and lateral-thinking engineers – the usually unknown artists – who design these magical objects. While he gives the high-end models their due, he seems equally charmed by serviceable cars such as Flaminio Bertoni’s Citroën 2CV, an “umbrella on four wheels” launched in 1948 for France’s still largely rural population and designed to be driven by a clog-wearing peasant across a ploughed field without breaking the eggs on the back seat. Not all the industry’s efforts at make-do-and-mend were so dependable and lovable. Parissien devotes much space to the tragic products of the British Leyland assembly line, such as the Morris Marina, a “skip on wheels” which arrived at showrooms with the paintwork already stippled with rust, and the Austin Allegro, whose pointlessly futuristic square steering wheel did not prevent it being nicknamed “the Flying Pig”. At least neither were as bad as the East German Trabant, made from Duroplast, an unrecyclable phenolic resin strengthened by Soviet cotton-wool waste and compressed brown paper, which released noxious fumes that made its assembly-line workers ill and killed quite a few of them.

The Life of the Automobile leaves you with the sense that the car is both an extraordinarily sophisticated object – made from tens of thousands of component parts, capable of delivering its occupants long distances in extreme comfort, and now fitted with stop-start engines, voice-activated controls, automatic parking systems and radar technology to read road markings – and a surprisingly primitive one. After all, its basic technology, the internal combustion engine, is a 19th-century invention and it remains, as the Japanese say, “a third-class machine”, needing a reasonably skilled human to work it properly. Parissien sees the automobile’s contradictions already encapsulated near the start of its life in the personality of Henry Ford – “daringly innovative, yet at the same time intrinsically conservative; brashly aggressive, yet apprehensive and hesitant; socially progressive, yet politically reactionary”.

Mark Wallington’s The Auto Biography is more personal and idiosyncratic, his idea being to tell the story of the last 60 years of British motoring through his own encounters with cars. The book begins in 1953 with his father’s purchase of a Ford Popular – a “biscuit tin on wheels”, which has only a single windscreen wiper – to bring his son back from the maternity ward. Wallington’s narrative runs from the excitements of the early motorway age to the disenchantments of the present, symbolised by his father turning road protester when a bypass is built at the back of his house. The book ends bathetically with the author’s purchase of a charcoal-grey Ford Focus, “a car that specialises in not being noticed”, although “perhaps it’s got a little more grey over the last two years”.

This convivial book is hard to dislike and there are some nice vignettes. Wallington’s father, who plans journeys along the virgin motorways of the 1950s and 60s with the same meticulousness he brought to his role as an RAF navigator in the war, warms his car’s spark plugs in the oven on winter mornings, so that breakfast smells are “offset by the piquant aroma of engine oil”. In her first trip on the M6, his mother buys a postcard of it at a service station to send to her hairdresser. During the suffocating summer of 1976, as long queues of hitchhikers form at Staples Corner at the foot of the M1, the asphalt melts and “you could peel it off the side of the roads”.

But as these details suggest, this book does not veer wildly from the main routes, presenting us with a series of stock figures from Tufty the road safety squirrel to Swampy the tunnelling road protester. It has that slight air of condescension you sometimes find in popular histories of the recent past, in which our immediate ancestors are seen as naive or quaint for getting excited about phenomena such as the motorway service station or the Gravelly Hill Interchange that, from our more knowing and enlightened present, are revealed as quite mundane.

Like modern cars, both these books rumble along nicely but seem largely cocooned in their own comforting microenvironment, cut off from the world beyond the dashboard. Neither of them seem much concerned with what the excitements, passions and anxieties generated by the car tell us about ourselves or our society. The car still awaits a social and cultural history that would explore how this miraculous and mundane object, what JG Ballard called this “huge metallised dream”, has come to penetrate so deeply into the routines and reveries of our waking lives.

• Joe Moran is the author of On Roads and Armchair Nation: An Intimate History of Britain in Front of the TV. To order Auto Biography for £11.99 with free UK p&p call Guardian book service on 0330 333 6846 or go to guardianbookshop.co.uk