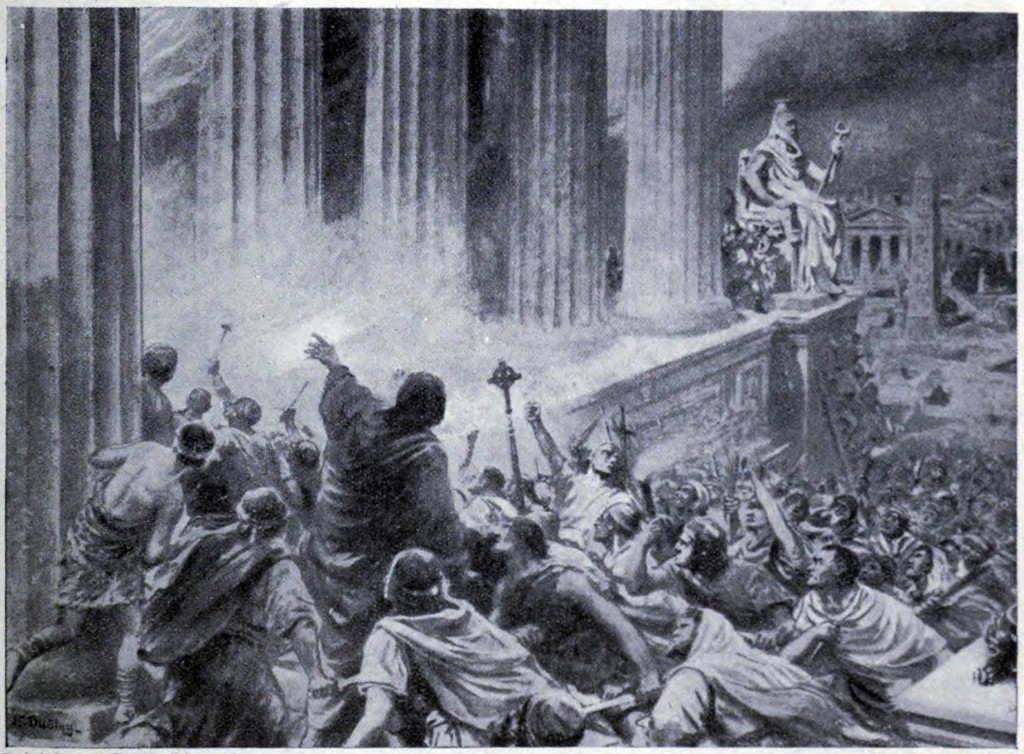 This article titled “Real books should be preserved like papyrus scrolls” was written by Rick Gekoski, for theguardian.com on Monday 27th January 2014 14.01 UTC

I have been thinking, as so many of us have, about the future of the book, and one conclusion now seems to me inevitable: as a Palaeolithic cave dweller might have observed, the writing is on the wall. I simply cannot believe that books will continue to be printed in the present numbers.

We had got used to reading on screens since the advent of the internet, but it wasn’t until the widespread availability of e-readers in 1998 that we had a serious alternative, and threat, to the printed book. Indeed, so complex is the matter now, that the very term “book” is no longer clear.

The passing of a form of life can be gradual, sometimes almost imperceptible. Sometimes – as now – it can happen at a bewildering pace. But as paradigms shift, there is not merely an excitement about the extended possibilities of the new form, but also a series of reactions – I had them myself – which might loosely be characterised as, at first, angry (I hate those ebooks), then defensive (alas, they are quite useful), then nostalgic (I rather miss real books), and finally accepting (couldn’t live without my e-reader!). The parallels to Elisabeth Kübler-Ross’s five stages in the process of facing death are amusing and illuminating.

In the tone of, say, Jonathan Franzen, we catch something of the elegiac.

“Maybe nobody will care about printed books 50 years from now, but I do. When I read a book, I’m handling a specific object in a specific time and place … Someone worked really hard to make the language just right, just the way they wanted it. They were so sure of it that they printed it in ink, on paper. A screen always feels like we could delete that, change that, move it around.”

This chillingly suggests the possibility of the destruction of the literary text. An e-text is infinitely malleable, but there is also the dreadful possibility that it might be disarranged or censored. Hence Franzen’s take on Amazon’s Jeff Bezos (more a bleat than a tweet): “He may not be the antichrist, but he sure looks like one of the four horsemen.”

John Naughton‘s From Gutenberg to Zuckerberg (what a great title!) sums up the problem perfectly:

“But this invention of ours is not a fixed, immutable object: it’s changing and evolving and could be perverted or throttled by the powerful industrial or political sources that it has threatened …”

Imagine the reaction of Orwell’s Big Brother, who might so easily have silenced the essential opposition that can be provided by printed books or pamphlets, if all he had to deal with was their electronic equivalents. Texts of political protest? Delete. Passionate assertions of some alternative way? Delete. Homage to the human spirit of resistance and reinvention? Delete.

You can burn books, but you cannot burn them all. But in a future electronic world, there will be a ghastly contingency about the written word, and we have to begin thinking – now! – about how this may be resisted.

The role of libraries is essential here, as secure repositories for the written word. And here I must admit a fear. In their rush to digitisation – an enthusiasm I find in most librarians I meet – there is the danger that libraries may too quickly abandon their crucial historical role. Already they have cut back, for instance, on the purchase of magazines and journals, and subscribed, instead, to their electronic versions. Think of all the shelf space that you free! How convenient not to have to arrange and rearrange, add texts as they arrive, dust and archivally preserve! But these new electronic versions may prove as fragile as the papyrus scrolls of Herculaneum and Alexandria: one moment of conflagration and they are gone.

If we can preserve and encourage the impulse to read, electronic books are a boon. They make reading available in the poorest parts of the world, where there are all too few books, which often have to survive, like their owners, in uncongenial conditions. But as Jeanette Winterson nostalgically observes, no electronic reader can accomplish the multitude of tasks that a library can, because it is a real place filled with real people. And real books, though they already feel expendable.

To my surprise, I cannot unambiguously regret this. I love – and am old enough to be able to continue to love – printed books. But ultimately what I care about is the word, the texts: the content of biographies, novels, poetry and essays, newspapers, magazines – all the input that sustains me on a daily basis. And I can project into that (largely) bookless iFuture because I am already doing much of my reading electronically. I still buy a lot of proper books, but fewer than I used to, and the process is accelerating.

It is a good index to how difficult it is to foresee the future that our early enthusiasm for the ebook has not led to the dominance of that form. Kindles, which only came on the market in 2007, already seem old-fashioned. For the new generation of screen-obsessed readers, it is stupid to buy a device that does only one thing, when it could so easily do others as well. Thus in the last few years, following the introduction of the iPad in 2010, we have seen a huge rise in the use of the tablet, which can not only download thousands of texts, but allows access to social networking, surfing, playing games, and downloading films and music.

The possibilities opened by the new technology – even for serious reading fogies like me – are remarkable, and have hardly been explored. For example, there is the terrific iPad app for Eliot’s The Waste Land, which gives us a vast variety of information about that great poem – blessed relief from the time-consuming scholarly need to go elsewhere to check variants and sources, parallels, manuscript incarnations, background information, biographical data.

For eBooks offer a variety of benefits that are irresistible: they can be downloaded instantly; are more easily portable; offer a library of texts in one small source; can be reformatted in typographical fonts and sizes; can be read in bed without turning on a lamp. They are not dependent on the deaths of 10s of millions of trees. They are cheaper than printed books – indeed 10s of thousands of them are free.

The texts of the future will expand imaginatively – following, I hope, the excellent example of the Waste Land app – into hypertexts that link with background information, illustrations and animations, visual and audio material. Will we call these new incarnations “books”? Why should we? They are something new.

And the printed book already feels like something old. Here we come, I think, to the essential future function of the rare-book library. It is easy enough to predict the gradual, and I think inevitable, decline of the local circulating library, but the library as museum, as the repository of things that will come to be viewed as objects of contemplation rather than strict utility – books to look at, and to look up in, rather than to read – for that there is, I hope, a secure future.

But as we digitise our texts do we not render them redundant? What need for a book for libraries and special collections when it is electronically copied and universally available? The ebook or e-manuscript becomes the studied object, not the thing itself.

My response to this rage for universal digital dissemination of material, of the manuscripts and texts that a great library may hold, was initially hostile. Don’t do it. Some years ago I outraged an audience of librarians at the University of Texas by describing digitisation as “for nerds”. I was wrong. It is worse than that. But it is going to go on happening, and the effects, ironically, will be many and beneficial.

We are coming to the point when researchers will never have to leave their desks, from which the vast resources of the world’s libraries will be instantly available. Why go to the British Library to see the illuminated manuscripts? Google. Point. Click. Study.

Printed books are of their time: testimony in ink, paper, typography, binding and design to a unique moment, delivering to our eyes and ears and hearts the voices from the past. Such objects subtly transmit their makers, a process that Jeanette Winterson nicely labels “the psychometry of books”. To a passionate reader they are electric with the word. And if it is ironic that readers of the future may grow up, like the child Jeanette Winterson, in households without printed books, they will still have plenty to read.

As the era of the book wanes, it will be the rare-book library’s major prerogative to hold on to what it has. The book may not have a future – and there will be fewer and fewer handwritten manuscripts – but such written material has a past that must be preserved and treasured.

As a species we are altogether neglectful with regard to our heritage and historical records. We lose, destroy, throw away, burn, delete, tear down, modernise. Things fall into disuse, then desuetude. We need to oppose this with all our energies: to resist the increasing pressure on funds and shelf space, and the deterioration of the objects themselves, to counter with strong reason the voices that will increasingly and aggressively complain: what do we need those dusty old things for anyway?

And the answer is that if once books were the providers of sacred texts, they must themselves come to be regarded as sacred objects, and be protected, preserved, studied and admired as we now value the cuneiform tablets and papyrus scrolls of our ancestors. Libraries are our repositories of paper. For 700 or 800 years paper has been how we have known ourselves and each other, recorded our events, thoughts and feelings, aspirations and memories.

When we consult this galaxy of surviving paper, sift it, make connections between and rearrange the bits, we come to know what we have been, who we are, what we might become. In preserving our documents, rare-book libraries will deserve the respect accorded to the great museums. In preserving this history we preserve ourselves, and make ourselves available to future generations. John Milton got it just right: a good book is “the precious lifeblood of a master spirit, embalmed and treasured up on purpose to a life beyond life”.